3/ Getting Defensive With Healthcare

Investopedia is partnering with All Star Charts on this newsletter, which both sells its research to investors, and may trade or hold positions in securities mentioned herein. The contents of this newsletter are for informational and educational purposes only, however, and do not constitute investing advice.

Financials were among the standout sectors of today's rally. Banks, and financials more broadly, have puzzled investors with their lackluster behavior so far this year. When interest rates rise, banks make more money through their lending operations.

For this reason, banks are usually an area of leadership in rising rate environments. That hasn’t been the case lately, however. 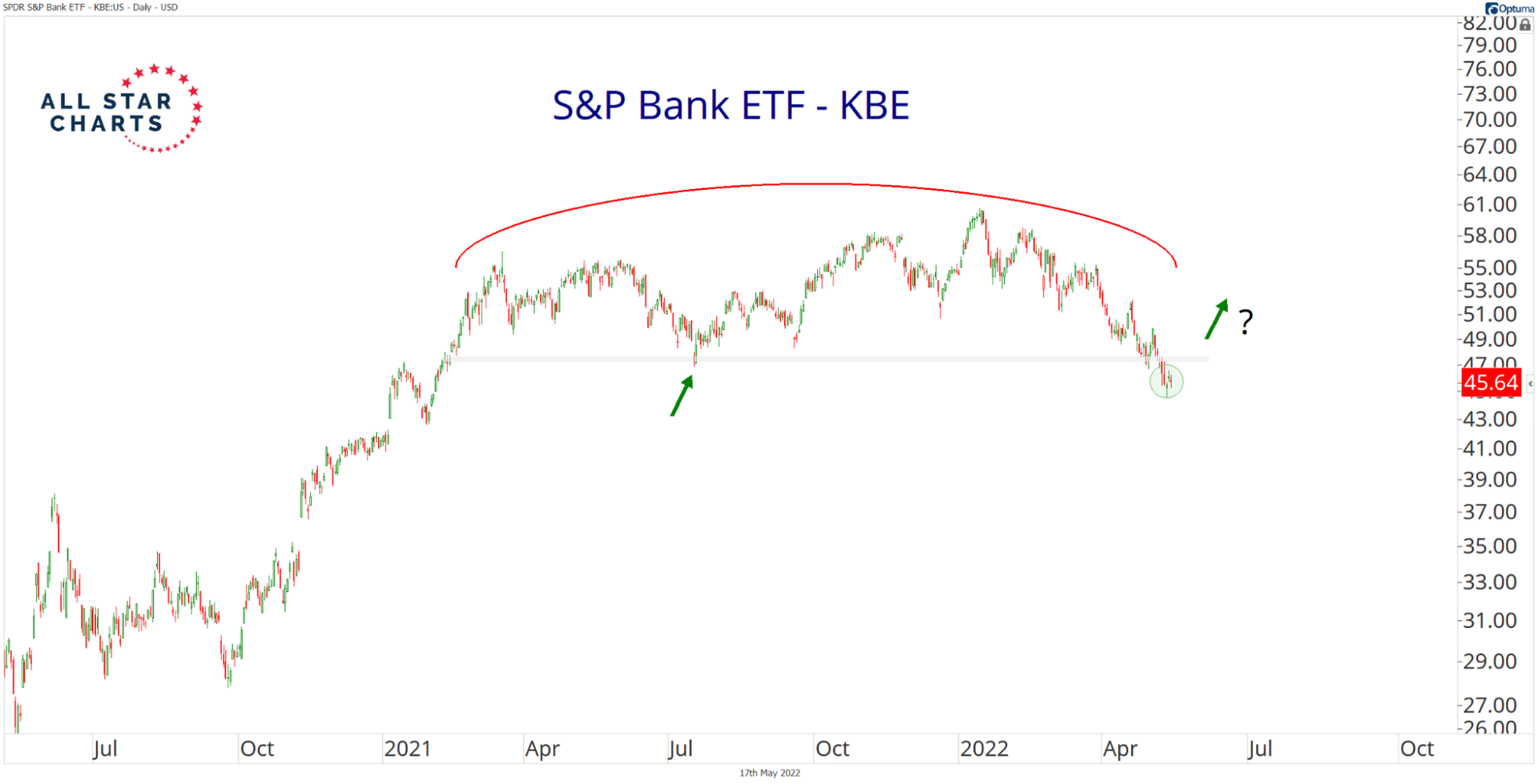 As indicated by the above chart, the S&P Bank ETF (KBE) just broke down from a large topping pattern. Today, prices rallied back to test the breakdown level of the distribution formation from below.

It would be a positive development if bulls could reclaim this key level and turn the current bearish resolution into a bull hook.

Yesterday, we discussed the critical level that is currently being tested by small-caps. As with other areas of the market, the Russell 2000 is currently testing its 2018 highs. For now, this resistance level is holding.

New information is arriving from indexes that have already violated key former highs. The Value Line Geometric Index, shown above, is an excellent example of this. Unlike the Russell, the Value Line was unable to find support at its former 2018 highs.

With markets experiencing a bear market bounce, we’re watching levels like this one to see how much downside bulls are able to recover.

Getting Defensive With Healthcare

We’ve written extensively about the defensive leadership that is currently taking place in U.S. equity markets. Whether it be consumer staples, utilities, or low-volatility stocks, all are showing relative strength. When these sectors lead, the broader market tends to struggle on an absolute basis. It is a classic characteristic of bear markets.

We’ve created a custom index of the ten largest names in the healthcare sector and charted it against the S&P 500. As you can see, these stocks have been outperforming for some time now, making them the strongest of all the defensive sectors. This is illustrated by their fresh highs relative to the broad market.

Weakness from commodity-centric currencies such as the Canadian dollar has been a new development and an advantage for dollar bulls. It also represents an intermarket data point that stacks against the current rally in commodities.

However, we’re starting to see the top commodity currencies reassert their strength and resilience. A great example is the potential failed breakout in the USD/CAD cross. 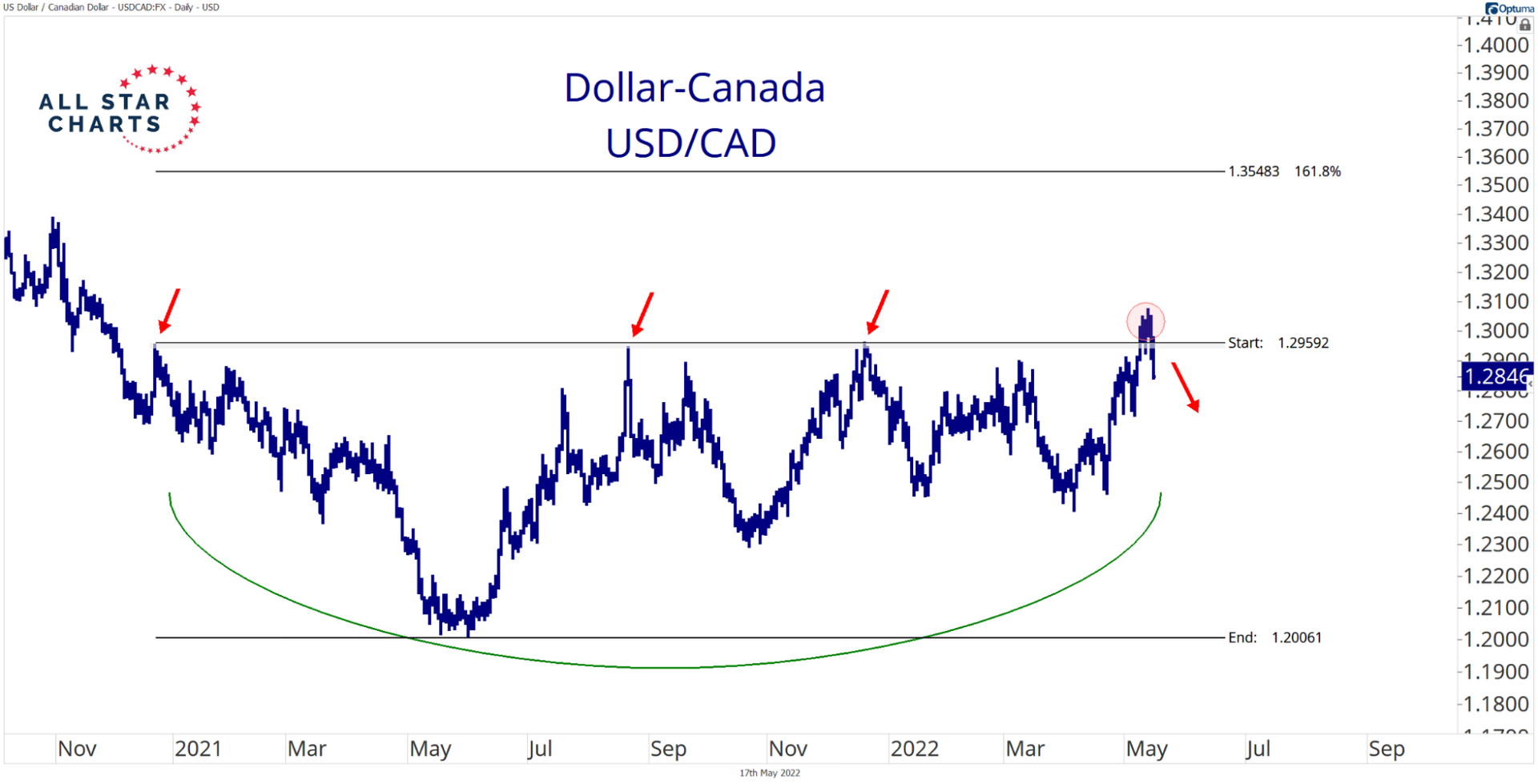 If the U.S. dollar continues to fall against the Canadian dollar, not only is it constructive for commodities, but it also presents evidence that the broad strength in the U.S. dollar may be cracking.

The USD/CAD slipping back into its prior range could serve as a foreshadowing of things to come for the U.S. Dollar Index (USDX).

Latest from The Investopedia Express

On the show this week, Raoul Pal, economist, investor, futurist and co-founder of Real Vision joins the show to share his perspective on the current sell-off, recession risks, and the future of crypto. Plus, we put the market's current spin-cycle in historical perspective and look for signs that the selling may be peaking. Are we "oversold", yet?

By Joseph Marks 13-17 minutes THE KEY President Trump delivers an address about border security amid a partial government shutdown on Jan. 8. (Carolyn Kaster/AP) The partial government shutdown that's now in its 18th day is putting key cyber policy priorities on hold and leaving vital operations to a bare bones staff. But the far greater long-term danger may be the blow to government cyber defenders' morale, former officials warn. With the prospect of better pay and greater job security in the private sector, more government cyber operators are likely to decamp to industry, those former officials tell me, and the smartest cybersecurity graduates will look to industry rather than government to hone their skills. That’s especially dangerous, they say, considering the government’s struggle to recruit and retain skilled workers amid a nationwide shortage of cybersecurity talent. About 20 percent of staffers are furloughed at the De
Read more

Markets Hello. Amrith Ramkumar here setting up the last trading day of the week. Stock futures are climbing following yesterday's 0.1% rise for the S&P 500. Intel is tumbling premarket following downbeat results late yesterday, while Starbucks is higher following its fourth-quarter report . Major indexes are on track to snap a streak of four consecutive weekly advances. Plus, our Sam Goldfarb examines a trend that could hurt the safety of leveraged loans.   Markets in a Minute   Overnight Developments Global stocks climbed Friday to erase much of the week’s declines as investors assessed fresh signals on the health of the corporate sector and the world economy. Read our full market wrap here The view from Asia: Fed's Patience Buys Breathing Room for Asian Economies   More Companies Issuing Loans Not Protected by Junior Debt By Sam Goldfarb, bond market reporter
Read more

- January 03, 2017
bloomberg.com Mark Buchanan The data scientists writing the algorithms that drive giants like Alphabet Inc. (Google) and Facebook Inc. are today's technology wizards, and companies and governments increasingly use their creations -- often in secret and with little oversight -- to do everything from hiring and firing employees to identifying likely suspects for police monitoring.
Read more

I have a MBA Degee Finance Concentration from The University Of St. Thomas at Houston Texas, in 1982. A Bachelor Degree from Universidad de Lima, at Lima Peru. Worked as Director on several companies, and taught Financial Management in Universidad de Lima. Designed and implement a Capitalization policy for expenses at the University of St. Thomas.