LVIV, Ukraine—Russia shelled civilian targets and prevented people from escaping some cities under attack during the war’s 12th day, while Kyiv’s military held fast along several fronts ahead of planned cease-fire talks.

Russia’s failure to capture major cities and its mounting loss of aircraft and armored vehicles have increased pressure on Moscow in a campaign that has drawn global condemnation and sanctions.

Ukrainian and Russian negotiators were entering their third round of talks on Monday afternoon in Belarus, according to Mikhail Podolyak, a Ukrainian participant, with progress uncertain after earlier agreements to allow civilians to flee the fighting collapsed. Foreign ministers of both countries are set to meet on Thursday in a Turkish resort city, Turkey said.

Foreign Minister Wang Yi of China, whose government has supported Russia while also calling for negotiations, said Beijing would work with the international community to provide “necessary mediation” when required. 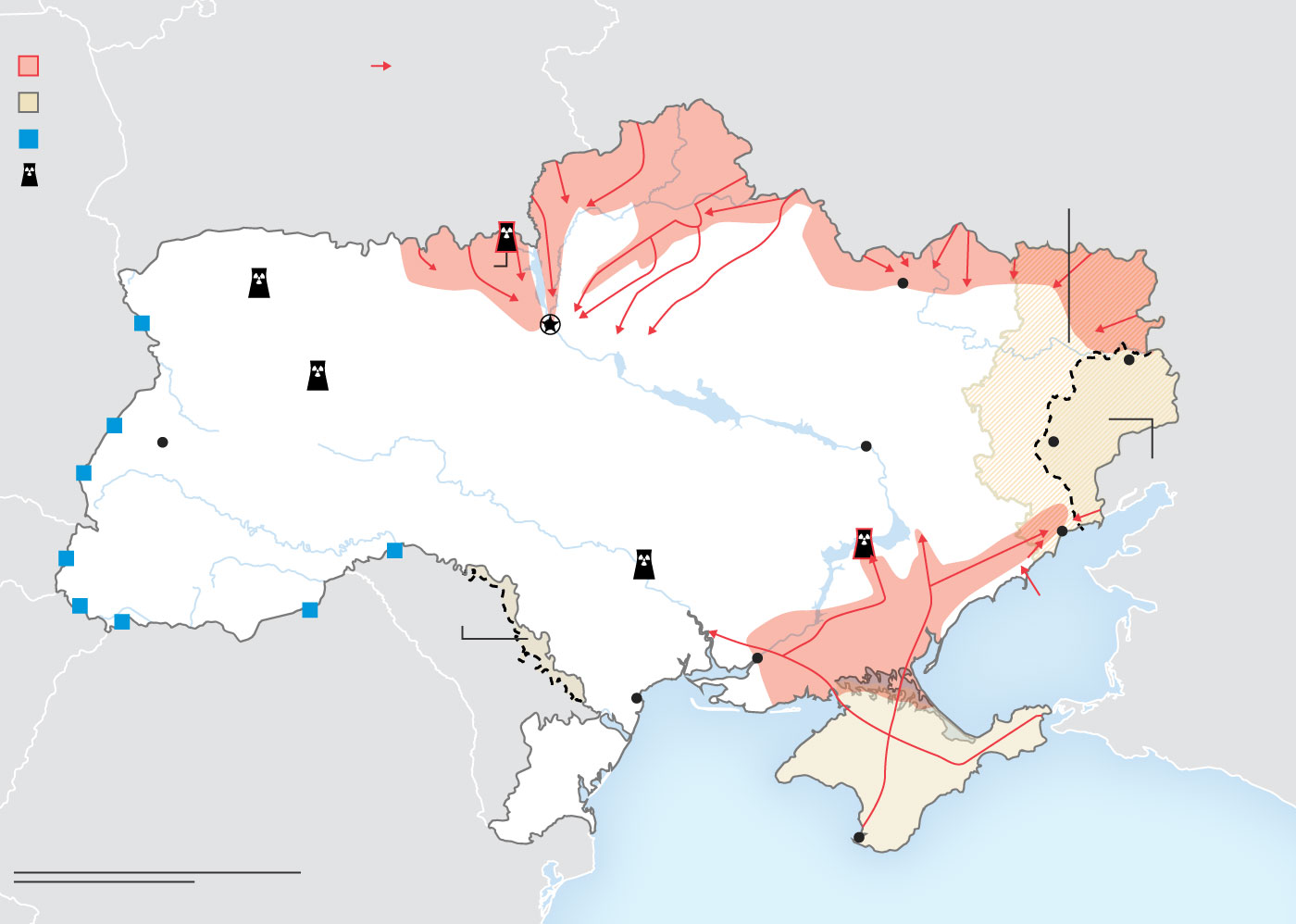 Areas seized as of Saturday

Controlled by or allied to Russia

With Ukraine’s ability to withstand the barrage amid increasing shortages of food, medicine and other supplies in question, President Volodymyr Zelensky, in separate calls with President Biden, U.K. Prime Minister Boris Johnson and Italian Prime Minister Mario Draghi, pressed his case for increased sanctions against Russia and the implementation of a no-fly zone over his country.

The North Atlantic Treaty Organization has rejected requests for a no-fly zone, saying it would risk war with Russia—an outcome that Russian President Vladimir Putin has threatened if any NATO members enter the conflict.

In a media briefing Monday, Mr. Zelensky called for a new package of sanctions and an embargo on Russian oil. “You can call this an embargo,” he said. “Or you can call this just morality, when you refuse to give money to a terrorist. Let the war feed them.”

The White House said an embargo was under consideration, causing oil prices to soar above $135 a barrel on global markets.

Mr. Putin spoke Monday with the president of the European Council, Charles Michel, asserting—contrary to evidence of deadly Russian attacks on civilians in Ukraine—that the Russian military was taking steps to save civilian lives, and accusing Kyiv of obstructing those efforts, according to the Kremlin’s account of the phone call.

Outside Kyiv, Russian forces shot and killed Yuri Prylypko, the mayor of Hostomel, and two people who were helping him distribute food and medicine, according to the local government’s Facebook page. Hostomel was the site of fierce fighting in the war’s early days.

In Kharkiv, near the Russian border, Russia intensified attacks on civilian targets, pressing to subdue a city, Ukraine’s second largest, that remains in Ukrainian control after days of fierce bombardment.

Russia’s concentrated strikes on civilian sites overnight in Kharkiv killed eight people and set more than 20 buildings ablaze, emergency services said. A Ukrainian counteroffensive retook a town on the outskirts of the city, with Ukrainian officials saying two Russian colonels were killed in the operation.

Kharkiv’s national police office said Monday that 209 people, including 133 civilians, had died so far in the attacks since Russia launched its invasion on Feb. 24.

A school in the northern city of Chernihiv was destroyed in shelling overnight, Ukraine’s emergency service said, while regional officials in Vinnytsia city to the south raised the death toll from a Sunday cruise missile attack to nine, including five civilians.

Elsewhere, Russia has been consolidating gains. In Irpin, to Kyiv’s west, where residents have been without food and water for three days, Russia moved in tanks and motorized infantry units in a sign of what may be in store for the capital. Ukraine’s government said 2,000 civilians were safely evacuated from Irpin on Monday.

Ukrainians continued to flee west from the fighting. The Polish Border Service said it had accepted more than 900,000 Ukrainian refugees since the war’s start.

Russia continued efforts to subdue cities and towns in the Ukrainian south, piecing together a land bridge to the Crimean Peninsula and choking off access to the Black and Azov Seas.

Russian forces have nearly encircled the Azov Sea port city of Mariupol, trapping civilians. Aid group Doctors Without Borders described the humanitarian situation in the city as catastrophic. In the nearby city of Melitopol, Russian forces took the main TV and radio tower, the city’s mayor said.

With food supplies threatened across the country, Ukraine banned exports of staples such as rye, oats, buckwheat, salt and sugar.

During the night, Russia assaulted an airport outside the southern port city of Mykolaiv, using Smerch multiple-rocket launchers to pound civilian targets.

Kyiv said Ukrainian forces had destroyed 30 Russian helicopters at an airfield near Kherson, a Russian-occupied city in southern Ukraine.

“We know that Russian troops are actively preparing to attack Odessa,” said Mr. Podolyak, who advises the Ukrainian president on military matters. “They have already tried to implement this plan. But our defense has managed to hold them back.”

A Ukrainian official in Odessa said Monday Ukrainian forces struck a Russian vessel in the Black Sea. Images on social media appeared to confirm the strike.

Ukrainian railways scheduled an additional evacuation train out of Odessa for Monday.

Also Monday, the Kremlin announced a list of what it called unfriendly countries, including the U.S., the U.K., Japan, Micronesia and Singapore. A Russian government plane left New York carrying a dozen United Nations diplomats that the U.S. last week ordered expelled.

Ukraine continued to muster international support. The United Arab Emirates said it had flown 30 tons of aid and medical supplies to Poland Monday for ground transport to Ukraine.

The U.K. announced a $100 million grant to help pay Ukrainian pensions and public-sector salaries, and the U.S., with Australia, Canada, New Zealand and the U.K. called on Interpol to suspend Russian membership.

“We decide the future of the continent with our resistance and our friends decide it with their help,” Mr. Zelensky said.

More than 1.45 million people have left Ukraine since Russia invaded the country 10 days ago, representing the largest displacement of people in Europe since World War II. Photo: Reuters/Yara Nardi

Write to Brett Forrest at brett.forrest@wsj.com