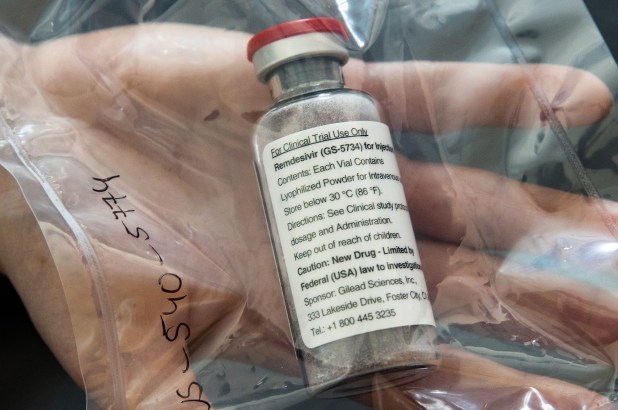 One vial of the drug Remdesivir is seen during a news conference in April. Ulrich Perrey/Pool/AFP via Getty Images

Gilead Sciences sold nearly $900 million worth of its coronavirus treatment remdesivir from July to September, the company announced this week.

The California-based drugmaker on Wednesday reported third-quarter revenues of $873 million from its antiviral drug, which was the first COVID-19 treatment to be fully approved by the US Food and Drug Administration.

The drug, sold under the brand name Veklury, helped Gilead post an 18 percent increase in its total product sales and a net profit of $360 million, a significant improvement from a nearly $1.2 billion loss in the year-earlier period.

Revenue from Veklury — which costs privately insured US patients $3,120 for a standard five-day treatment — added to increased sales from Gilead’s HIV and cell therapy drugs. Sales of its hepatitis C treatments dropped 31 percent to $464 million in the quarter, while revenue from other products declined 11 percent to $462 million.

This was the first full quarter for which Gilead reported sales for remdesivir, which the FDA cleared for emergency use in coronavirus patients in May before granting it full approval last week. The company noted that revenues for the drug will be volatile because it’s sold in a “dynamic and complex global health environment, which continues to evolve.”

Gilead has said about 50 countries around the world have approved Veklury or authorized the drug for temporary use as a COVID-19 treatment. The medicine, which Gilead first developed to treat Ebola, entered the spotlight earlier this month when President Trump received a five-day course during his bout with the virus.