News | Business | Politics (US-China): China to impose sanctions on US officials in retaliation for HK measures


China will impose sanctions on 11 US citizens in response to similar measures from Washington on Chinese and Hong Kong officials, as the two sides step up their dispute over Beijing’s imposition of a new security law on the city.
The move by Beijing came after Hong Kong police detained Hong Kong media tycoon Jimmy Lai on Monday for allegedly breaching the security law in the highest profile arrest since the legislation was introduced in June.
China’s foreign ministry said it would impose the measures on US Senators Marco Rubio and Ted Cruz. Kenneth Roth, executive director of Human Rights Watch, and Michael Abramowitz, the president of US government-funded organisation Freedom House, were also on the list. It did not specify what form the sanctions would take.
The US last week imposed sanctions on 11 Hong Kong and Chinese officials over the implementation of the security law, including the territory’s Chief Executive Carrie Lam.
“The US practice is an interference in Hong Kong’s affairs and China's internal affairs,” a China foreign ministry spokesperson said. “Based on this wrong behaviour, China decided to impose sanctions on those individuals who behaved badly on Hong Kong-related issues.”
The tit-for-tat sanctions will add to growing tensions between China and the US since the introduction of the law, which was intended to crack down on Hong Kong’s pro-democracy and protest movements.
Apart from Mr Lai, six others including two of his sons and other executives of Next Digital, Mr Lai’s media group, were also detained by the police, according to Mark Simon, a close aide to the entrepreneur.
Mr Lai’s Apple Daily newspaper released photos and live video showing scores of officers filing into Next Digital’s high-rise offices and beginning their searches.
Police said they had arrested seven people on suspicion of committing crimes including colluding with foreign countries or forces to endanger national security. They did not release the names of the arrested individuals.
They later said the number of arrests had risen to nine, though the two additional individuals were not detained in connection to Mr Lai’s company.
The Hong Kong government has cracked down on local activists after the national security law came into force, through arrests or by barring pro-democracy candidates from running in local elections.
The US and aligned countries have condemned the Hong Kong and Chinese governments over the law. Aside from the sanctions against Ms Lam and others, US President Donald Trump has also withdrawn Hong Kong’s special trading status, which exempted the territory from sanctions applied to mainland China. 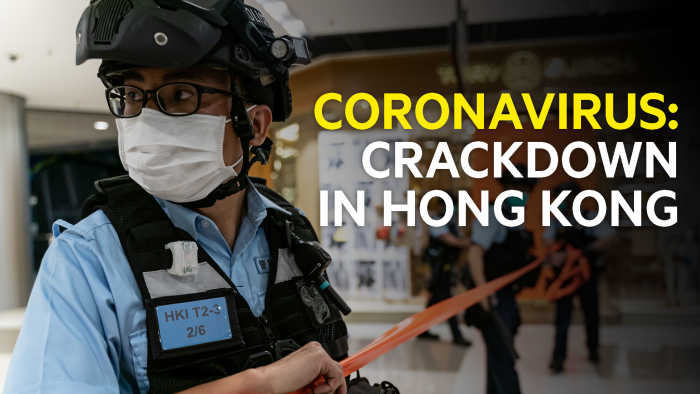 How Beijing is cracking down on Hong Kong
Foreign ministers of the “Five Eyes” intelligence-sharing network, which comprises the US, UK, Canada, Australia and New Zealand, on Monday issued a joint letter sharply criticising Hong Kong officials for postponing legislative elections and disqualifying pro-democracy candidates.
Ms Lam delayed the poll scheduled for September 6, citing the coronavirus pandemic. But critics alleged the decision was more closely driven by politics than the health crisis.
“Beijing promised autonomy and freedoms under the ‘One Country, Two Systems’ principle to the Hong Kong people in the Sino-British Joint Declaration, a UN-registered treaty, and must honour its commitments,” said the letter.
Mr Lai, 72, is the founder of Next Digital, the Hong Kong-listed publisher of newspaper Apple Daily and Next Magazine, which are among the most popular publications in the city. He found early success with the fashion chain Giordano but said he was inspired to move into publishing by the Tiananmen Square massacre in 1989.
China has previously accused Mr Lai of endangering national security after he met Mike Pence, the US vice-president, last year and Mike Pompeo, secretary of state, in July 2019. Beijing has accused him of being one of the masterminds behind Hong Kong’s anti-government protests.
Mr Lai was arrested on suspicion of “collaborating with foreign forces”, according to Mr Simon. The crime carries a sentence of up to life imprisonment. Mr Lai was already facing other criminal charges related to illegal assembly and intimidating a reporter. He has pleaded not guilty to intimidating a reporter and is expected to plead not guilty to illegal assembly.
The decision by the Five Eyes to issue a joint condemnation of Beijing and Hong Kong authorities highlights an increasing willingness to extend the group’s activities beyond intelligence sharing as tensions rise.
“China’s intensifying pressure on Hong Kong, alongside its assertive policies in other areas, has driven the Five Eyes governments closer together. What was an intelligence alliance is starting to look more like a united front to call out and push back against Beijing’s transgressions,” said Ben Bland, analyst at Lowy Institute.
Shares in Next Digital plunged in morning trading only to swing to gains of as much as 344 per cent in afternoon trading in Hong Kong as online pro-democracy forums called on investors to buy the stock.
Stanley Wong, a columnist for Apple Daily, said he had bought 1.2m shares in the company as a “show of support” for the company. Mr Wong sold his shares as other investors piled in and said he would use the HK$75,000 (US$9,700) profit to fund a scholarship at the Chinese University of Hong Kong.