Some 73 new open-ended equity and balanced funds were launched in June, taking the total to 4,110, data from the Asset Management Association of China (AMAC) showed.
The net value of open-ended equity and balanced funds stood at 4.2 trillion yuan ($599.5 billion) for the month, up nearly 70% from 2.5 trillion yuan in the same period last year, according to AMAC.
Analysts also confirmed the trend that has helped propel China’s stock market to five-year highs.
“There are 639 mutual funds newly launched for the first half. I believe these new funds add fuel to a strong rally in the A-share market,” said Xav Feng, head of Asia Pacific Research, Lipper at Refinitiv.
Graphic: China's mutual fund industry grows rapidly here 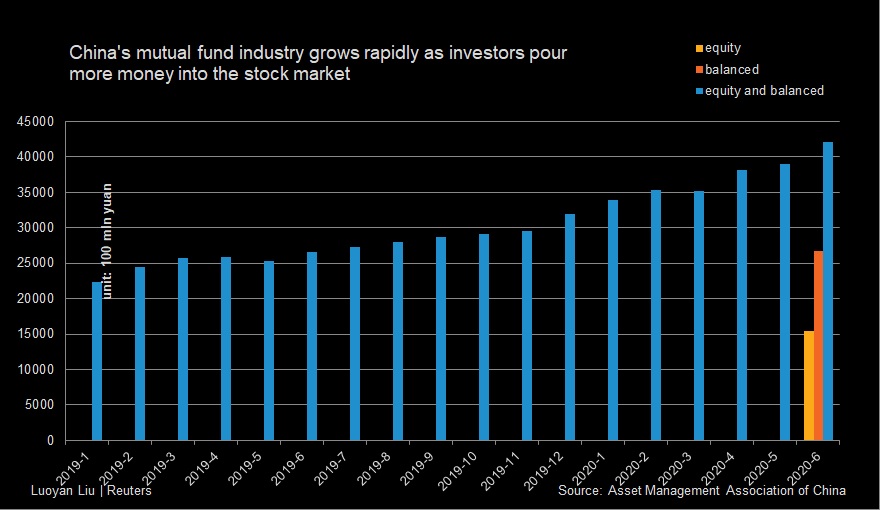 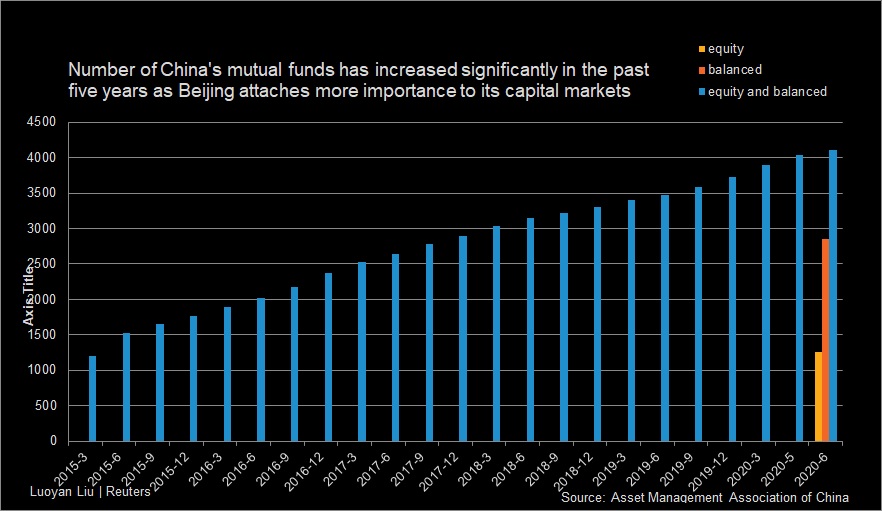 Z-Ben estimated there were outflows of 1.23 trillion yuan to 2 trillion yuan from safe-haven money market funds in the second quarter as investors switched to the stock market. [nL3N2EL0P5]
China’s CSI300 blue-chip index has risen to its highest in more than five years on hopes of an economic recovery, Beijing’s continued reform of the capital markets and monetary easing.
Graphic: China stocks rally as investors cheer reforms
Analysts and fund managers said investors were investing more via funds as stock picking had become more complicated for individuals due to uncertainties such as the coronavirus outbreak and Sino-U.S. geopolitical and economic tensions.

Investors in real estate and wealth management products offered by banks, two traditional retail investment channels, are being lured by the stock market rally.
The number of bond funds has also jumped this year.

In a sign of retail frenzy for funds, China Universal Asset Management Co launched a mid-cap investment fund on July 6, but suspended taking money after just half a day of sales, so as to “limit the fund size to ensure smooth operation after hot subscriptions” from investors.
“I am at a loss now as everyone is talking about gains from stocks. Maybe I could put some money into funds, as I’ve little knowledge about investing,” a user said in a post on China’s Twitter-like Weibo.

Reporting by Luoyan Liu and Andrew Galbraith; Editing by Vidya Ranganathan and Jacqueline Wong
at July 15, 2020