DealBook: The ‘Moment of Truth’

‘It’s just very peculiar times’
Three of America’s six biggest banks released second-quarter earnings yesterday. The others report today and tomorrow. Based on the first batch of results, there’s trouble ahead.
Citigroup, JPMorgan Chase and Wells Fargo set aside $28 billion for loan-loss provisions, on top of $19 billion earlier this year. That pummeled second-quarter profits, which were collectively down more than 80 percent versus the same time last year. There could be some “kitchen sinking” — that is, dumping all the bad news into one quarter so future periods look better by comparison. Even so, there was little to be hopeful about. 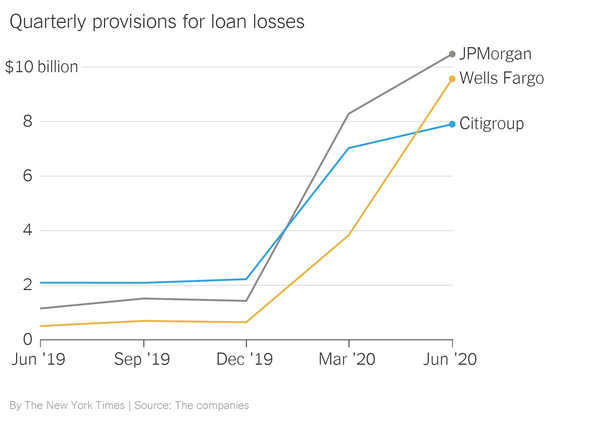 It could get worse before it gets better. Jamie Dimon of JPMorgan said that unprecedented economic stimulus measures had delayed the effects he’d expect in a “normal recession,” like falling incomes, savings and property prices. “It’s just very peculiar times,” he told analysts on a conference call. If the economy picks up before stimulus programs expire, the banks’ loss provisions could be excessive. But that’s not what executives seemed to suggest:
• “May and June will prove to be the easy bumps in terms of this recovery. And now we’re really hitting the moment of truth, I think, in the months ahead.” — Jennifer Piepszak, JPMorgan’s C.F.O.
• “Our view of the length and severity of the economic downturn has deteriorated considerably from the assumptions used last quarter.” — Charlie Scharf, Wells Fargo’s C.E.O.
• “I don’t think anybody should leave any bank earnings call this quarter simply feeling like the worst is absolutely behind us and it’s a rosy path ahead.” — Mike Corbat, Citigroup’s C.E.O.
It’s not all bad. Trading and underwriting revenue surged, helping JPMorgan and Citi offset the gloom elsewhere. Retail-focused Wells Fargo wasn’t as lucky, recording its first quarterly loss in more than a decade. That could be particularly promising for Goldman Sachs, which reports today, and Morgan Stanley, which is up tomorrow. But ominously, lenders increased loss provisions for business loans more in percentage terms than they did for consumer debt, suggesting that they expect more corporate bankruptcies. (The Fed governor Lael Brainard warned as much yesterday).
Fun fact: Who needs cash when you’re stuck at home? Wells Fargo said that A.T.M. transactions were down 28 percent from a year ago, but the average withdrawal per visit was higher.

Apple wins big over back taxes

A European court sided with the iPhone maker today, potentially saving it a $15 billion tax bill. The court ruled that the E.U. competition authority failed to show that Ireland had unfairly given Apple low taxes.
It’s a big loss for Margrethe Vestager, the E.U. competition chief. She has regularly targeted such arrangements, angering tech executives like Tim Cook of Apple, who derided the campaign as “total political crap.” (Even so, the bill would have amounted to a bit more than the tech giant earns in a quarter.)
The same court overturned a similar demand involving Starbucks last year. The directorate Ms. Vestager runs “did not succeed in showing to the requisite legal standard that there was an advantage,” the court ruled. Expect Ms. Vestager to appeal the decision.

After opposition from universities, Silicon Valley and 20 states, President Trump backed off a hard-line immigration proposal.
The White House abandoned a policy that would have stripped international students of their visas if they did not attend some classes in person. “If they’re not going to be a student or they’re going to be 100 percent online, then they don’t have a basis to be here,” Ken Cuccinelli, the acting deputy secretary of homeland security, said this month.
The rules could have led to a huge loss in international students, a valuable source of income for schools and skilled workers for American businesses, particularly tech companies. The Times notes that the one million foreign students who enroll at U.S. schools each year contribute $41 billion to the economy and support more than 458,000 jobs.
Universities sued to challenge the policy, led by Harvard and M.I.T., which argued that it was an effort to force schools to reopen. The pressure grew when tech giants like Facebook and Google joined in. Then, 15 Republican lawmakers urged the White House to reverse course.
But damage has been done, The Washington Post columnist Catherine Rampell argues. Other immigration hurdles — including delays in visa processing and travel bans — will most likely contribute to a huge drop in international student enrollment this fall. (How steep? Between 63 percent and 98 percent, according to a new analysis.)


Here’s what else is happening

Moderna’s Covid-19 vaccine showed promise in a clinical trial. The vaccine, the first to be tested on humans, provoked a notable immune response and appeared safe for the first 45 people to receive it, researchers wrote in the New England Journal of Medicine. It is to move to Phase 3 trials this month.
President Trump signed a Hong Kong sanctions bill. The new law gives him additional power to punish Chinese officials over a security act that gives Beijing more control over the territory. (Separately, The Times said it would move part of its Hong Kong news operation to Seoul, South Korea, because of concerns over the law.)
A federal judge scuttled Harvey Weinstein’s civil settlement. Judge Alvin Hellerstein of the Southern District of New York picked apart the $25 million proposal, questioning its overall fairness and suggesting that the agreement was misconceived.
Delta said its comeback had stalled. The U.S. airline reported a $5.7 billion loss for its latest quarter and said it would scale back its flight schedule.
The N.F.L. has no plan for its upcoming season. Training camps are scheduled to start July 28, but the league has yet to figure out social distancing guidelines or the logistics that other leagues developed as part of their restarts.

Britain, reversing course, said yesterday that it would strip Huawei technology from its 5G wireless network. President Trump claimed a victory in his battle against the Chinese tech giant.
Prime Minister Boris Johnson bowed to political pressure, after saying Huawei products could be used in Britain’s networks on a limited basis. Huawei equipment purchases will be banned from December, and existing gear will be removed by 2027.
• British critics, including in its national security agencies, worry that Huawei products could be used to spy for Beijing. The company strongly denies those allegations.
Mr. Trump celebrated the announcement. “We convinced many countries, and I did this myself for the most part, not to use Huawei, because we think it’s an unsafe security risk,” he said at a news conference.
The move ends a relationship that began in 2005. Britain was the first European country to let Huawei sell products to its companies. Just last month, the Chinese company agreed to fund a $1.25 billion research center at Cambridge. And John Browne, the former BP chief and an elder statesman of British business, served as chairman of Huawei’s U.K. board — though he will now step down.
Britain faces potentially big consequences. It may have repaired strains in its relationship with the U.S., but the ban will add costs and delays to its 5G rollout. And Beijing threatened that Britain would “bear the consequences” of treating China with hostility.


The most crowded trade in history

For the past 25 years, Bank of America has surveyed fund managers about how they are positioning portfolios. When a consensus emerges, the bank’s pollsters say, investors generally profit by betting against it.
Buying tech stocks is now the “longest ‘long’ of all-time,” the latest survey found. Nearly three-quarters of fund managers agreed that holding big U.S. tech stocks was the “most crowded” trade in the market, the survey’s strongest ever consensus. For contrarians, that’s a sign that it’s time to sell, Bank of America says.
Tech giants’ dominance is a risk to long-term returns, Goldman Sachs analysts write in a new research note. The five largest stocks in the S&P 500 index — Alphabet, Amazon, Apple, Facebook and Microsoft — now account for 23 percent of its market cap. “We believe further equity upside would require participation from a broader subset” of the index, the analysts say. (For what it’s worth, Goldman concludes that the S&P 500 will generate a 6 percent annual return over the next decade, versus nearly 14 percent over the past decade and 10 percent since 1960.)

Deals
• Google agreed to invest $4.5 billion in Jio, the digital services arm of India’s Reliance Industries, joining the likes of Facebook and Silver Lake. (Bloomberg)
• Virgin Atlantic secured a $1.5 billion financial lifeline, made up of cash and concessions from partners like payments processors. (NYT)
• Electric-car makers like Fisker and Rivian are raising billions without having sold a single vehicle. (Axios)
Politics and policy
• Joe Biden unveiled a $2 trillion climate plan focused on expanding green energy as a way to bolster the economy. (NYT)
• The lobbyist Jack Abramoff pleaded guilty to illegally promoting a cryptocurrency. (Bloomberg)
Tech
• A German court ruled that Tesla had exaggerated promises about the capabilities of its autonomous vehicle technology. (NYT)
• Google reportedly prioritized YouTube in video search results to give it more leverage in negotiations with content providers. (WSJ)
Best of the rest
• BlackRock said that it recently voted against directors at 53 companies for failing to prepare for climate change, and threatened the same for 191 more. (Bloomberg)
• Many U.S. retailers have ended “hero” bonuses for essential workers, despite a surge in coronavirus cases. (NYT)
We’d love your feedback. Please email thoughts and suggestions to dealbook@nytimes.com.
Posted by Fernando Guzmán Cavero at July 15, 2020