DealBook: An Epic Reversal of Fortune


‘The numbers are sort of all over the place’

What crisis? In the second quarter, which ended yesterday, the S&P 500 rose 20 percent, its biggest quarterly gain since 1998. Put another way, it was the best quarter for stocks this century, which sounds even more grandiose. But market watchers told The Times’s Matt Phillips that the outlook is murkier than usual.
There was an epic reversal of fortune in the second quarter, with the S&P 500 regaining nearly all the ground lost in its 20 percent plunge in the first quarter. (The index is still down about 4 percent on the year.) The last time there was a bigger quarter-to-quarter swing was back in 1932, according to S&P. 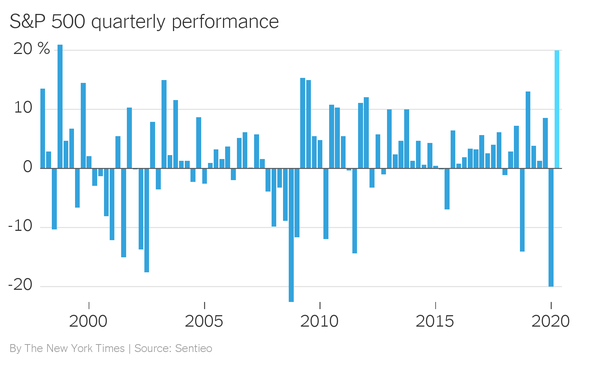 Here’s the thing: earnings are awful. Analysts estimate that profits at blue-chip American companies fell 44 percent in the second quarter, per FactSet. And earnings are expected to continue sliding in the second half of the year, ending with a 22 percent drop.
But who’s to say? Analysts are flying blind, since many companies have stopped providing earnings guidance, citing the uncertainties of the pandemic. Nearly 200 companies in the S&P 500 have withdrawn their customary forecasts for the year, according to FactSet, and half as many companies as usual are providing quarterly earnings guidance.
• These forecasts can be gamed, with companies often prepping analysts to expect earnings just below what they eventually deliver. Still, it is a useful anchor, especially in times of turmoil. In their absence, “the numbers are sort of all over the place,” Lori Calvasina, the head of U.S. equity strategy at RBC Capital Markets, told Matt. 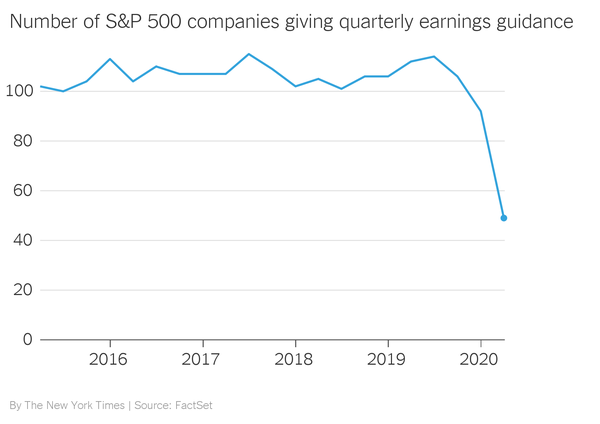 What’s next? Companies will start releasing second-quarter earnings reports in a few weeks, and investors will see if things are as bad as estimates suggest. A pickup in recent economic data gives some reason for optimism, while a surge in confirmed infections in some states has sent reopenings into reverse.
• Analysts at Goldman Sachs write that their baseline forecast is for the S&P 500 to gain 5 percent in the second half of the year. In their “vaccine upside” scenario, stocks rise by 14 percent from here — but in the “virus downside” scenario, they drop 30 percent.
____________________________
Today’s DealBook Briefing was written by Andrew Ross Sorkin in Connecticut and Michael J. de la Merced and Jason Karaian in London.
____________________________

The Senate extended the Paycheck Protection Program by five weeks. The move to revive the federal coronavirus aid initiative, which was set to expire yesterday with $130 billion still in its coffers, must be approved by the House and signed into law by President Trump.
Airbus will slash 15,000 jobs. The plane maker cited a 40 percent drop in commercial aircraft activity in announcing the plan to cut 10 percent of its work force.
Microsoft unveiled an initiative to retrain 25 million people in digital skills. As a first step, the tech giant — using resources from divisions like LinkedIn and GitHub — plans to help people identify new jobs.
Harvey Weinstein and some of his accusers agreed to a $19 million settlement. The tentative deal would give payouts to dozens of women who had accused the disgraced movie mogul of sexual harassment and assault, but must still be approved by federal judges.
The Business Roundtable will announce recommendations for overhauling policing. The group, which represents America’s blue-chip companies, plans to offer its support for steps like greater transparency from police departments on use of force, a nationwide police misconduct registry and standards for conduct that include banning chokeholds.

Executives at the social network are scrambling to contain the damage from a growing ad boycott to protest its policies on hate speech and misinformation. More than 300 advertisers have now joined.
What a difference a week makes. Last Tuesday, Mark Zuckerberg held a call for advertisers where he struck a “defiant tone,” according to The Times’s Tiffany Hsu and Mike Isaac. “He discussed the importance of freedom of speech and stressed his company would not bow to pressure on its revenue.” But Facebook is striking a much more conciliatory tone in calls this week, although it has tried to frame the controversy as an industrywide phenomenon.
• ”As if all social media companies are equal. They are not,” Kara Swisher, The Times Opinion columnist, writes, noting that she has deactivated her Facebook accounts. Addressing the company, Kara added, “The problem of hate and misinformation flowing on social media is yours to own.”
A “trickle-down effect” from the big-name brands in the boycott is denting Facebook’s finances, analysts say. The company’s top 100 advertisers account for only around 6 percent of its revenue, but the moves by Coca-Cola, Starbucks, Unilever and others could influence millions of smaller advertisers to cut back, too.
• Yesterday, Facebook said it had banned hundreds of accounts, groups and pages linked to the far-right “boogaloo” movement, whose goal is to incite a race war in America.

The pandemic’s effect on boardroom confidence put the deal industry in a deep freeze in the first half of the year, data from Refinitiv shows.
Nearly $1.2 trillion worth of deals have been announced so far this year, down 42 percent from the same time a year ago. It was the slowest first half for M.&A. since 2013. (The drop in the number of deals was less drastic: down 18 percent year-on-year.)
• The drop in activity was even more noticeable for larger transactions: The overall value of deals worth more than $5 billion was down 53 percent year-on-year.
• That’s despite some notable transactions being announced in the first half, including Willis Towers Watson’s $30 billion acquisition of Aon and Just Eat’s $7.3 billion takeover of Grubhub. 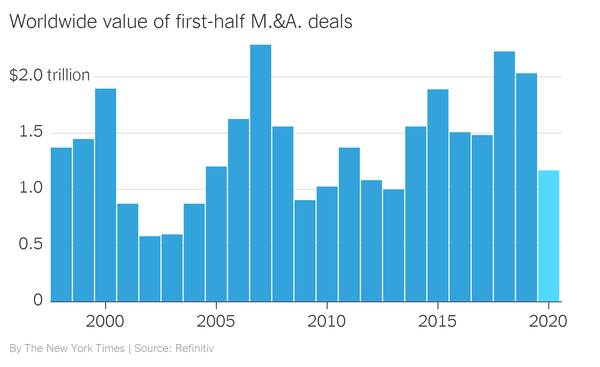 Ever-hopeful deal makers say that companies are adjusting to the new reality, and will be eager to strike deals again. “Many of our clients are starting to think big and outside of the box, asking themselves what has changed and how do I adjust my strategic priorities to reflect the pandemic we have all been living through,” Dusty Philip, Goldman Sachs’ co-head of M.&A., told Reuters.
• That said, several companies are trying to undo deals agreed on before the pandemic. Among them were Simon Property’s effort to end its takeover of Taubman and Sycamore backing out of a deal for control of Victoria’s Secret.
Critics, including lawmakers, are worried about a merger wave. In a Times Op-Ed, Tim Wu writes that companies using the coronavirus to buy weakened rivals “might yield a superficially impressive economic recovery — a rebounding stock market, big dividends for shareholders — while destroying what remains of the middle class in this country.”
• Mr. Wu proposes ways to help distressed companies without resorting to deal-making, including the government prohibiting coronavirus aid cash from being used for M.&A. and encouraging workers to buy control of their employers.

The economics of wearing a mask

Face coverings have become an unexpected flash point in the U.S., and a matter of dispute even among the leaders of the nation’s economic recovery efforts.
The Treasury secretary and Fed chairman took different approaches to masks at a Congressional hearing yesterday. Though both men wore coverings as they arrived at the House, Treasury’s Steven Mnuchin took his off while speaking; the Fed’s Jay Powell didn’t.
• Perhaps correlating with their feelings on face coverings, Mr. Mnuchin is an optimist who expects the economy to rebound later this year, while Mr. Powell is more concerned about the fragility of the recovery.
Americans are still fighting over masks — sometimes literally — even as Vice President Mike Pence now says that wearing them is “just a good idea” as coronavirus cases in the U.S. continue to set new daily records. Dr. Anthony Fauci, America’s top infectious disease expert, said yesterday that the U.S. could see daily infections could soar to 100,000 if more drastic measures aren’t taken.
Goldman Sachs has calculated the economic effect of wearing masks to slow the spread of the virus. Economists at the bank figured that a national mask mandate, which could substitute for a second round of lockdowns, would avoid a 5 percent drop in America’s G.D.P. “Our analysis suggests that the economic benefit from a face mask mandate and increased face mask usage could be sizable,” the economists wrote in a recent note.

Deals
• The food-delivery company Postmates is reportedly deciding whether to sell itself to Uber, stage an I.P.O. or merge with a special purpose acquisition company that would let it begin trading in the stock markets. (CNBC)
• Have the federal government’s enormous coronavirus aid programs helped stave off a wave of corporate bankruptcies? (WSJ)
Politics and policy
• A New York State judge temporarily blocked publication of a tell-all book by President Trump’s niece Mary, to determine whether she was violating a confidentiality agreement. (NYT)
• The business community has largely embraced a new security law tightening Beijing’s control of Hong Kong — thanks in part to a huge inflow of Chinese money into the territory. (NYT)
Tech
• Shares in Wirecard, the German payments processor that has faced accusations of accounting fraud, have risen fourfold this week even though it has filed for insolvency. (Bloomberg)
• Reddit’s C.E.O., Steve Huffman, opens up on why the social network banned a prominent community of Trump supporters: “A community that’s not willing to work with us has no place on Reddit.” (NYT)
Best of the rest
• “We Socialize Bailouts. We Should Socialize Successes, Too.” (NYT Opinion)
• Robin Hood, the Wall Street-backed antipoverty foundation, has started a new fund focused on financing nonprofits run by people of color. (CNBC)
• “Did Kim Kardashian just become a billionaire? It’s complicated.” (Business Insider)
Thanks for reading! We’ll see you tomorrow.
We’d love your feedback. Please email thoughts and suggestions to dealbook@nytimes.com.
at July 01, 2020