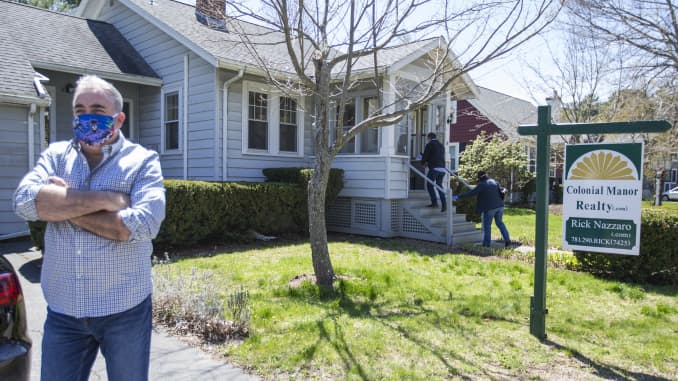 Rick Nazarro of Colonial Manor Realty waits in the driveway as a couple enters a property he is trying to sell during a “controlled” open house on May 2, 2020 in Revere, MA.
Blake Nissen | The Boston Globe via Getty Images

Rising interest rates did nothing to deter an onslaught of mortgage demand from homebuyers.
Applications for loans to purchase a home rose 5% last week from the previous week and were 13% higher than a year ago, according to the Mortgage Bankers Association’s seasonally adjusted index.
Mortgage rates started the week near a record low but rose steadily throughout the week, with a spike on Friday, following the May employment report, which was much less dire than expected. The average for the week, however, showed only a small gain, with the 30-year fixed increasing to 3.38% from 3.37% for conforming loans with a 20% down payment. Points, including the origination fees, were unchanged at 0.30.
“The recovery in the purchase market continues to gain steam, with the seasonally adjusted index rising to its highest level since January,” said Joel Kan, an MBA economist. “Purchase activity increased for the eighth straight week.”
Pent-up demand from the spring market, along with low interest rates are fueling a surprisingly quick recovery in home buying. As local economies open up, so do open houses, but there is still a severe shortage of homes for sale. Inventory was down 25% last week from a year earlier, according to Zillow.
Low rates to start the week likely fueled an 11% jump in applications to refinance a home loan. That volume was 80% higher than a year ago, when mortgage rates were 74 basis points higher. While refinances were up for the week, the annual comparison is getting smaller and smaller, as fewer borrowers are able to benefit. Lenders are not offering the best rates on refinances because of added risk in the market from coronavirus mortgage relief programs.
The refinance share of mortgage activity increased to 61.3% of total applications from 59.5% the previous week.
Mortgage rates pulled back again at the start of this week, but it is still unclear if they hit a ceiling or if it was a momentary retreat. The Federal Reserve is not expected to raise interest rates at its meeting Wednesday, but the statement from the meeting could provide more insight into where rates are headed.

“The Fed announcement is the biggest potential flashpoint for volatility in the bond market this week. The Fed will certainly continue to buy Treasuries and mortgage-backed bonds,” said Matthew Graham, chief operating officer at Mortgage News Daily. “This is a key ingredient in keeping rates as low as they have been.”
Posted by Fernando Guzmán Cavero at June 10, 2020