North Korea has blown up its joint liaison office with the South near the border town of Kaesong, South Korean officials say.
The move comes just hours after the North renewed threats of military action at the Korean border.
The site, which is in the North's territory, was opened in 2018 to help the two Koreas to communicate.
The liaison office has been empty since January due to Covid-19 restrictions.
Tensions between North and South Korea have been escalating for weeks, prompted by defector groups in the south sending propaganda into the north.
The North Korean leader's sister, Kim Yo-jong, threatened to demolish the office in a "tragic scene" in a statement at the weekend.
South Korea's Unification Ministry in Seoul confirmed that at 2:49pm local time there was an explosion. 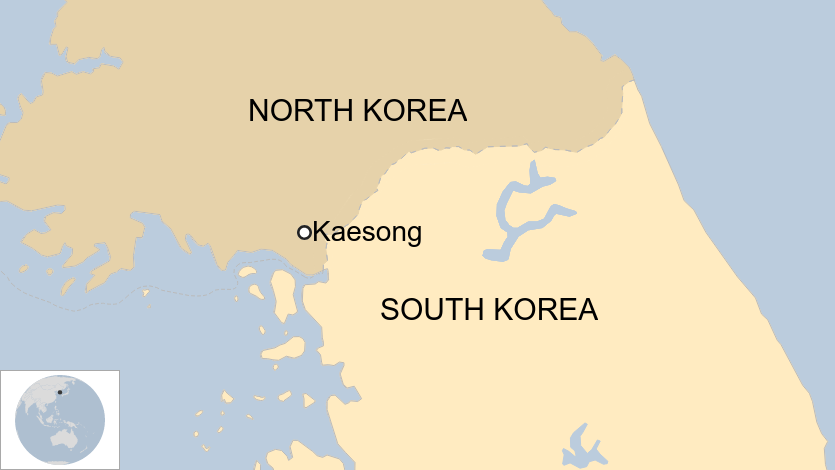 In recent weeks, North Korea has repeatedly condemned the South for allowing propaganda across the border.
Defector groups regularly send such material via balloons, or even drones, into the North.
Last Tuesday, Pyongyang announced it was severing all official communication links with Seoul.
Over the weekend, Kim Yo-jong threatened to send troops into the demilitarised zone (DMZ) at the inter-Korean border.
Then, before the explosion on Tuesday, the military leadership confirmed it had a plan to send troops into the DMZ and said it was ready to "turn the frontline into a fortress".
The two states set up the office in Kaesong after talks between North Korean leader Kim Jong-un and his counterpart from the South, President Moon-Jae-in.
"North Korea's violent destruction of the liaison office at Kaesong is a symbolic blow to inter-Korean reconciliation and co-operation," said Leif-Eric Easley, a professor at Ewha University in Seoul.
"It's hard to see how such behaviour will help the Kim regime get what it wants from the world, but clearly such images will be used for domestic propaganda."
Analysts say Pyongyang may also be seeking to create a crisis to increase its leverage as nuclear negotiations with the US are at a standstill.
North and South Korea are technically still at war because no peace agreement was reached when the Korean War ended in 1953.


Who is Kim Yo-jong?

In recent years the younger sister of Kim Jong-un has emerged as his close and powerful ally.
From 2014, Kim Yo-jong's main job was to protect her brother's image, taking up a key role in the party's propaganda department.
When, in 2017, she was elevated to an alternate member of the politburo, it seemed to indicate a shift in seniority - although her main role remained in propaganda.
In 2018, she shot into the international spotlight when, at the Winter Olympics, she became the first member of the Kim family to visit South Korea.
Her continued rise shows she has gained the deep trust of her brother, and when Mr Kim's disappearance in April prompted questions about his health - she was touted as a possible successor.
In recent weeks, she has been responsible for delivering several strongly-worded messages against the South - and has emerged as North Korea's new point-person on inter-Korean affairs, according to specialist site NK News.
However, North Korea's power mechanisms are notoriously difficult to understand.
It's therefore hard to gauge how much power -or how much of her own political network - the 32-year-old might have.