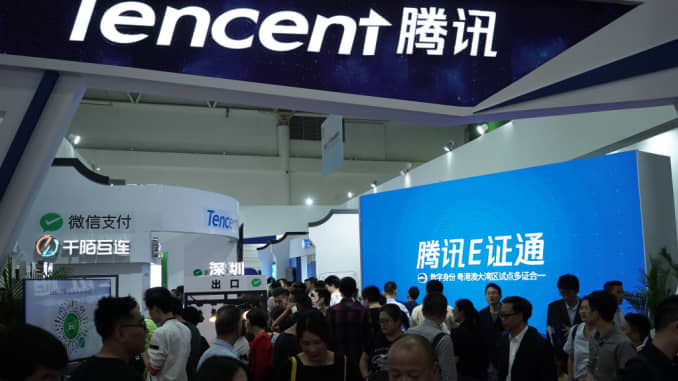 Chinese internet behemoth Tencent’s stock briefly hit new records on Wednesday, bringing it into a tight race with rival Alibaba for the title of Asia’s biggest company by market cap.
In early trade on Wednesday, shares of Tencent soared past 500 Hong Kong dollars per share, surpassing its previous record high of 498.60 Hong Kong dollars set on Tuesday. However, it later lost those gains and closed 1.33% lower. Meanwhile, Hong Kong-listed shares of Alibaba edged 0.64% higher.
At the intraday highs of their respective Hong Kong-listed shares, both Tencent and Alibaba’s market cap stood at 4.82 trillion Hong Kong dollars (approx. $621.92 billion). That’s according to CNBC calculations, multiplying the stock price by number of shares outstanding.

Still, Tencent could see further gains. On Tuesday, analysts at Bernstein raised their target price to 570 Hong Kong dollars per share, representing upside of almost 13% from the stock’s Wednesday high. Meanwhile, Nomura’s price target is 531 Hong Kong dollars per share, implying about 5% upside.
“Recent meetings have given comfort to investors that Tencent’s advertising business is performing stronger than expected,” Neil Campling, Mirabaud Securities’ head of technology, media and telecommunications, told CNBC in an email on Tuesday.
“We think there were many who thought ByteDance would steal market share away from Tencent and that simply isn’t happening,” he said, referring to the Chinese tech unicorn behind the immensely popular social media platform TikTok.
“It is possible for there to be two big digital ad companies in China (just like Facebook and Google co-dominate in the West) and Tencent’s digital economy of scale is difficult to replicate or overthrow,” Campling said.
Bernstein analysts cited a “more optimistic view on advertising as well as gaming” in their note announcing their increased target price. They said, “We don’t think the upside for (Tencent’s) core business is factored in yet.”
“We believe Tencent has reached a tipping point in advertising as its technology improved while ByteDance’s growth slows down, allowing Tencent to take further market share going forward,” the analysts said. “We raise Tencent advertising revenue growth this year to 29% YoY (up from 18% before). In the next 3 years, we see 24% advertising growth (compound annual growth rate) as Tencent gains further market share.”
Nomura analysts were similarly upbeat in a recent note: “We believe Tencent’s ads should fare better than most of its peers as the WeChat platform is highly valued by advertisers.”

Mirabaud Securities’ Campling also pointed to Tencent’s move to “accelerate” the economy on its WeChat platform, China’s most popular messaging app.
Often described as a “super app,” WeChat integrates multiple functions, making it a one-stop shop for users. Companies may decide to launch mini-programs, or apps within WeChat itself, instead of having a standalone app.
A recent soft launch of the “WeChat Mini Store” could offer a viable alternative to Alibaba for small and medium businesses, Campling said. Citing industry players, he added that users of the Mini Store may be able to sell their products through live broadcast. This offers “massive social eCommerce potential” for Tencent, Campling said.
at June 24, 2020