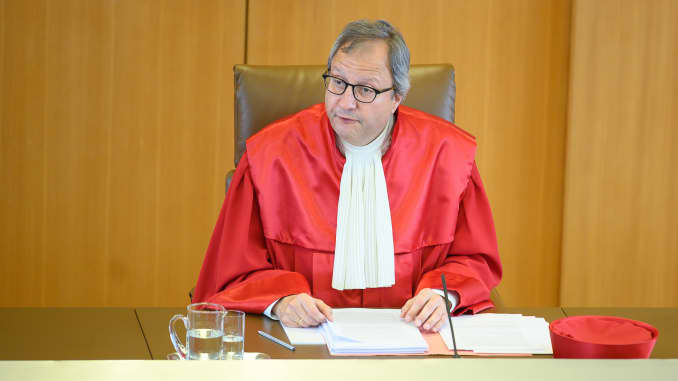 The chairman of the German constitutional court Andreas Vosskuhle speaks on May 5, 2020 at the Constitutional court in Karlsruhe, to give out the court’s ruling that the European Central Bank must clarify a key bond-buying scheme to support the eurozone economy is “proportionate” or else Germany’s Bundesbank central bank may no longer participate.
SEBASTIAN GOLLNOW

A top German court ruled Tuesday that the European Central Bank’s bond buying did not respect the “principle of proportionality,” suggesting the euro zone’s central bank went too far with its mandate.
German judges assessed the ECB’s quantitative easing (QE) program, or PSPP, which was introduced in 2015 until 2018 and then restarted in late 2019. The idea behind the initiative was to prop up the euro zone economy by keeping borrowing costs low across the euro zone.
However, a new ruling said the German government failed to take steps to challenge the ECB in its decision to purchase government bonds.
“The ECB fails to conduct the necessary balancing of the monetary policy objective against the economic policy effects arising from the program. Therefore, the decisions at issue...exceed the monetary policy mandate of the ECB,” the court said Tuesday in a statement.

Crucially, however, the German court said: “The decision published today does not concern any financial assistance measures taken by the European Union or the ECB in the context of the current coronavirus crisis.”
The ECB stepped up government bond purchases in March in the context of the coronavirus crisis, in a stimulus packaged dubbed Pandemic Emergency Purchase Programme or PEPP. Analysts feared that the court decision on quantitative easing could raise problems to the pandemic program as well due to their similarity in nature.
Nonetheless, there are still concerns that the German constitutional court will look at the virus stimulus program in the future.
“It will take some time to fully understand the implications of the German Constitutional court’s ruling on the ECB’s quantitative easing program today ... But this could certainly become a real problem for the ECB in the recovery phase of the crisis,” Carsten Brzeski, chief economist at ING Germany said in a note.
Claus Vistesen, chief euro zone economist at Pantheon Macroeconomics, said that “these are fighting words from the German court, and it ends with an ultimatum and a threat to the ECB, not to mention German politicians.”
The German court asked the Bundesbank, Germany’s central bank, to stop buying government bonds under the ECB’s stimulus program in the next three months.
The only way to avoid this is if the ECB proves that these Bundesbank’s purchases are needed, according to the court’s ruling.
The euro dropped 0.7% against the U.S. dollar on the back of the decision. Nomura said in a note that Tuesday’s ruling “causes uncertainty and with it we’ll likely see this move in (the) euro continue.”