Postng Days From Monday to Thursday 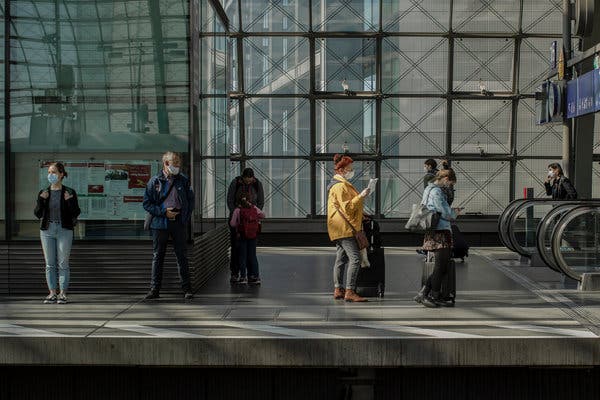 European markets rise before release of new gauges of damage.

Global markets were mixed on Thursday, as investors held their breath over data that could add to the picture of how the world economy is dealing with the coronavirus outbreak.
European markets rose in early trading after a mostly down day in Asia. Futures markets signaled a positive opening for Wall Street.
Washington is expected on Thursday to post the latest monthly payroll data, showing the extent of the toll of the outbreak and efforts to contain it. While an ebb in new cases in some of the hardest-hit places has given investors some reason to cheer, they also face the prospect of a surge in new infections in other places, particularly as lockdown efforts ease.
Highlighting the worries, prices for longer-term U.S. Treasury bonds, typically seen as a place to park money during times of turbulence, were higher in early Thursday trading. Oil prices on futures markets fell, giving the markets another cautionary note.
In Tokyo, where trading resumed after a string of holidays, the Nikkei 225 index rose 0.3 percent. Most other regional markets fell. Hong Kong’s Hang Seng index was down 0.5 percent. In mainland China, the Shanghai Composite index lost 0.2 percent. South Korea’s Kospi was flat. In Australia, the S&P/ASX 200 index was down 0.4 percent.
In London, the FTSE 100 index was up 0.3 percent early. The DAX index in Germany gained 0.7 percent at the opening, while the CAC 40 in France was up 0.5 percent.

China’s exports jump. The good news may not last. 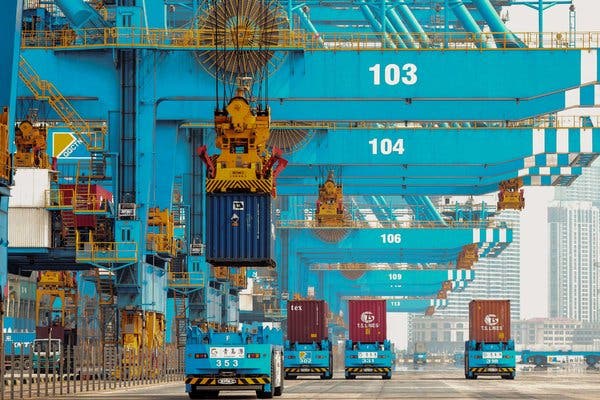 China’s exports to the rest of the world unexpectedly jumped in April. While that would seem to be a positive development in a time when the coronavirus has curbed demand for just about everything, the good news may be fleeting.
Chinese customs officials said on Thursday that exports in dollar terms rose 3.5 percent when compared with April 2019. It was the first such increase since the outbreak emerged in Wuhan in December and spread across the world. The results surprised economists surveyed by Bloomberg and Reuters who had predicted another drop.
China’s economy, which shrank in the first quarter for the first time in decades, is expected to continue to struggle in part because the pandemic has closed stores in many other countries that would have sold Chinese-made goods.
A surge in exports would normally be seen as positive news, but economists chalked up the increase to a return in Chinese production — and local companies fulfilling pre-existing orders — rather than a run in new business. China’s vast trade machine will face tough challenges as the world recovers in the months to come, amid signs that the long-simmering trade war between the United States and China may be heating up again.
More predictably, imports fell 14.2 percent in April compared with a year earlier, as China’s lockdown efforts and slow restart cut into demand. 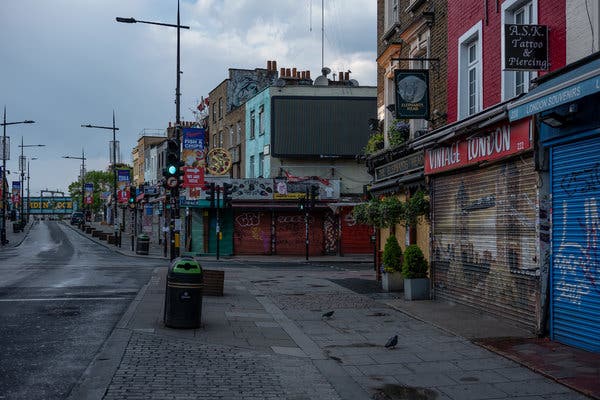 The Bank of England, Britain’s central bank, said on Thursday that the economy in the April-June quarter would be nearly 30 percent smaller than at the end of 2019, as consumer spending would fall nearly 30 percent, while business revenue, investment and trade all contracted sharply.
The bank said that the full-year economy for 2020 would most likely fall 14 percent, compared with a 1 percent increase in 2019.
But the bank, which also announced it would hold interest rates steady at 0.1 percent, said it expected economic activity to pick up “materially in the latter part of 2020 and into 2021” after the lockdowns in Britain and elsewhere are eased and people are able to return to work. It forecast a 15 percent jump in economic growth for 2021.
In its report, the bank said it had tested the financial strength of major British banks and found that they were strong enough to continue lending in the difficult economic environment.
The bank, which described its report as a “scenario” rather than a formal forecast, acknowledged that the outlook for both the British and global economies was unusually uncertain and depended on the evolution of the pandemic and “how governments, households and businesses respond.” On Wednesday, the European Commission projected a 7.4 percent collapse in the European Union economy for 2020. 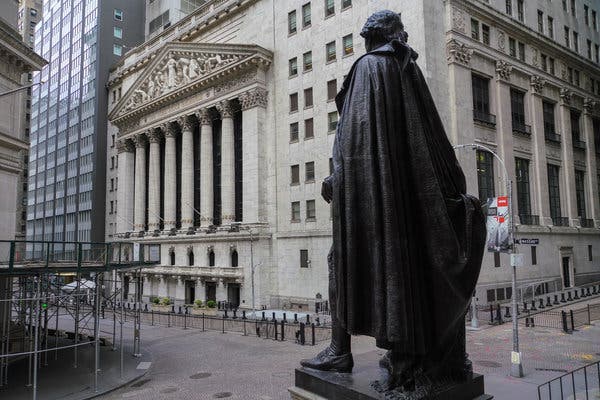 After a day of swinging between gains and losses, stocks on Wall Street ended with a small decline Wednesday.
Markets had been buoyed this week by signs that the countries hardest hit by the virus were slowly emerging from economically devastating lockdowns, though gains on Monday and Tuesday were small — as was Wednesday’s decline. The S&P 500 fell less than 1 percent.
Sign up to receive an email when we publish a new story about the coronavirus outbreak.
The rest of the week will bring more concrete evidence of the severity of the damage caused by the shutdown, with a monthly report on unemployment Friday to provide a comprehensive look at the number of Americans out of work.
Already, reports on jobless claims have shown that more than 30 million workers in the United States sought unemployment benefits over the six weeks through April. Another weekly update is due on Thursday.
On Wednesday, the ADP National Employment Report showed the private sector work force had plunged by 20 million jobs in April. Separately, new data from the European Commission predicted a deep recession on the continent this year.
Oil prices, which had rebounded over the past two days, fell on Wednesday. The price of benchmark crude in the United States retreated to a little over $23 a barrel. Brent crude, the international benchmark, fell below $30 a barrel.

Even with most plants shut, G.M. is keeping some Corvette workers busy. 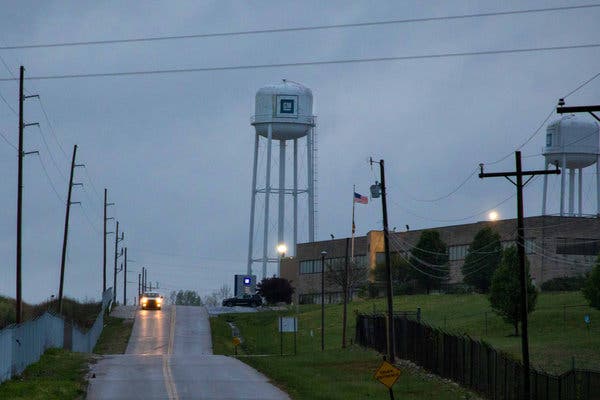 The North American plants of the three big U.S. automakers have been closed since mid-March. Mostly.
A handful of General Motors workers have labored on — including several dozen at a plant in Bedford, Ind., that makes chassis for Chevrolet Corvettes.
A G.M. spokesman said the factory’s continuing operation was aimed at reducing a chassis shortage and helping resume Corvette production more quickly once the company reopens an assembly plant in Bowling Green, Ky.
The spokesman said that the Bedford plant was running three shifts a day — with about 20 people per shift, down from about 250 hourly workers normally — and that the workers had volunteered for the assignment, at their usual wage.
The company said Wednesday that it planned to “restart the majority of manufacturing operations” in North America on May 18.
The G.M. spokesman said that aside from the Bedford plant, the company had continued work at a Texas plant to finish building a sport utility vehicle before the plant changed over to a new model, and in Lockport, N.Y., to make replacement parts for existing vehicles.
Brian Rothenberg, a United Automobile Workers spokesman, said the union had cooperated with such efforts if the return to work was voluntary and adequate safety measures were in place. 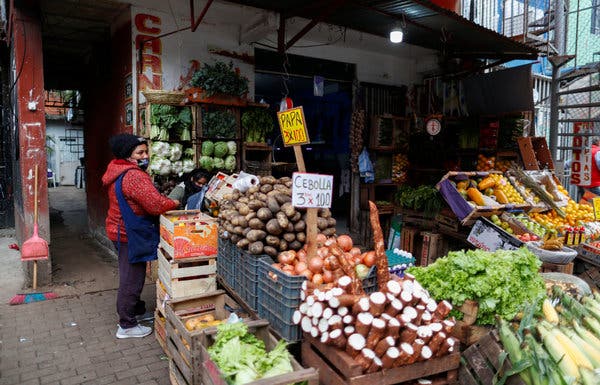 Strict measures to limit the spread of the coronavirus in Argentina have kept most of its citizens safe, but have deeply undercut its economy, putting the country on a path toward what could be the ninth debt default in its 200-year history.
Argentina stopped making the scheduled payments on its $65 billion of debt in April, and entered a 30-day grace period that will run out on May 22. If an agreement with creditors cannot be reached by then, Argentina will officially be in default, compounding economic problems that now include 50 percent inflation and a 30 percent poverty rate.
Argentina’s economy minister, Martin Guzman, has sought to use the grace period to pitch a debt-reduction proposal to creditors including big institutional investors that buy bonds, like BlackRock, Fidelity and Pimco. The proposal includes suspending all debt payments for three years, then reducing the principal amount by about $3.6 billion and reducing the interest payments by applying lower rates.
The offer will be withdrawn if it has not received traction by Friday. So far, Argentina’s creditors have made just one firm counterproposal, suggesting big differences between the parties.
Argentina has been under quarantine restrictions since mid-March, and has closed its borders and banned the sale of domestic and international commercial airline tickets until Sept. 1. The measures appear to have limited the spread of the coronavirus: Argentina has reported about 250 deaths out of a total population of about 45 million. 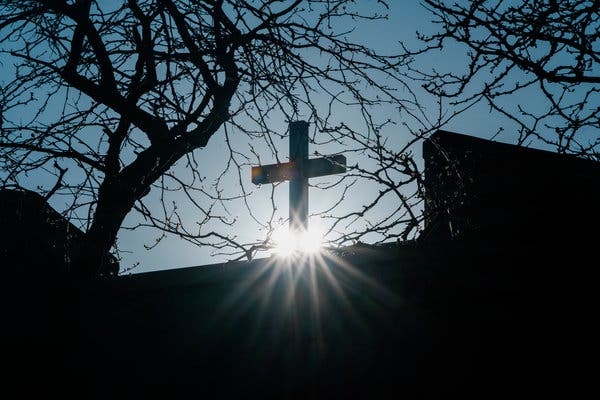 Religious organizations around the United States are looking to a troubled federal loan program for help as donations dry up.
Around 9,000 Catholic parishes have received Paycheck Protection Program loans administered by the Small Business Administration, said Patrick Markey, the executive director of the Diocesan Fiscal Management Conference, which works with dioceses on financial issues.
“Everybody’s trying to keep their people on the payroll and hoping that with the P.P.P. they can do that until they start meeting again, and then no one gets let go,” he said.
A survey by the Jewish Federation of North America found that at least 533 loans had been distributed to Jewish organizations with a total value of $276 million. The median value of the loans was $246,000, said Rebecca Diner, a spokeswoman for the group.
The loans are meant to stabilize small businesses and are forgivable by the government if the majority of the funds go toward payroll. The government distributed $342.3 billion in loans in the first round of the program, which ended in mid-April. It has distributed $183.5 billion in loans in a second round as of Wednesday evening.
But the program has been plagued by complaints that big businesses have received the money ahead of smaller establishments, like independent restaurants and retailers.
It has also attracted ample interest from nonprofit organizations like religious congregations worried about a downturn in donations and other sources of revenue. That includes some private schools with large endowments that have kept the loans in the face of backlash from the administration and their own alumni.

Catch up: Here’s what else is happening.

From The Desk of Fernando Guzmán Cavero.

Dear friends :  Unfortunately Some Themes, Pages and other features are not working fine in an appropriate manner with quite a few mistakes...