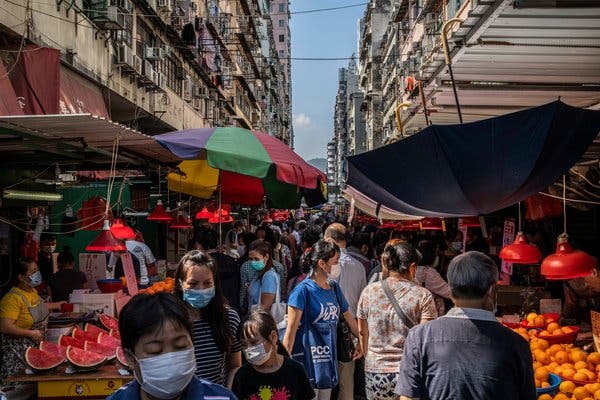 Global markets on Monday were pointing to a downbeat beginning to the week, with stocks falling and futures markets predicting a negative opening for Wall Street.
Markets in France and Germany opened more than 3 percent lower, on a day when many markets were catching up after a trading holiday on Friday in much of the world. Futures market were predicting Wall Street would open about 0.6 percent lower.
Prices for U.S. Treasury bonds also rose during Asian trading, amid investor skepticism over the global economic outlook.
Sentiment was also hurt by rising tensions between the United States and China. The Trump administration, under pressure for its own bungles in dealing with the outbreak, has ramped up criticism of China’s response. Other governments have also added their criticism.
Shares in Hong Kong, which didn’t trade Thursday and Friday because of holidays, ended down 4.2 percent. South Korea’s Kospi index fell 2.7 percent. Taiwan’s Taiex lost 2.2 percent.
In London, the FTSE 100 index was down 0.5 percent early in the trading day. In Germany, the DAX index was down 3.2 percent. France’s CAC 40 index was down 3.7 percent.

J. Crew files for bankruptcy, the first major retailer to fall during the pandemic.

J. Crew, known for producing preppy fashion with mass market appeal, filed for bankruptcy on Monday. The company is the first major retailer to fall victim to the pandemic that has hobbled the world economy.
The company, whose popularity was lifted more than a decade ago by Michelle Obama, had amassed enormous debt even before the outbreak. Since then, it has seen sales virtually wiped out at more than 170 J. Crew stores and a further 140 operated under the popular Madewell brand that it also owns.
J. Crew had struggled to keep up with changing tastes, but appeared to be adapting in recent months, having named Jan Singer, formerly of Nike and Victoria’s Secret, its new chief executive. The company had been planning an initial public offering this spring of Madewell, a popular denim brand among millennials, to pay down debt and revamp the J. Crew brand.
While it is the first major retailer to fall to the coronavirus, J. Crew is unlikely to be the last. The pandemic halved sales of clothing and related accessories in March and is believed to have had an even greater effect in April. Neiman Marcus is carrying significant debt, for example.
And Brooks Brothers is already facing questions about its future.

Hong Kong’s economy shrank by 8.9 percent in the first three months of the year compared with a year earlier, according to government estimates, the worst plunge since the authorities began tracking similar data in 1974.
On a seasonally adjusted quarter-to-quarter basis, Hong Kong’s economy contracted by 5.3 percent when compared with the fourth quarter.
Private consumption, imports and exports fell by about one-tenth. Social distancing, layoffs and concerns about the future of the economy led to a drop in spending.
The coronavirus slowed Hong Kong’s economy before it spread around the world, so the semiautonomous Chinese city’s performance could offer a hint of what might happen elsewhere. But it was already in a recession brought by anti-government protests and the protracted trade war between the United States and China.
Hong Kong could also offer a hint of what an emergence might look like. The city has managed to keep the outbreak under control through widespread use of masks, social distancing and aggressive efforts to track and isolate those who have been infected. The city has recorded 1,040 confirmed cases and four deaths, with no local cases reported over the past two weeks.
Schools, bars and public facilities have been closed, and a series of restrictions have been put in place to reduce the number of people in restaurants. Still, the city has avoided the broad lockdowns put in place in mainland China, Europe and the United States.
The government has also introduced several stimulus measures, including tax cuts and handouts of 10,000 Hong Kong dollars each, or about $1,300, to adult residents.
Sign up to receive an email when we publish a new story about the coronavirus outbreak.
Hong Kong officials estimate that the economy will contract this year by 4 percent to 7 percent.


New efforts to cut food waste as risk of hunger grows in America.

Even as lines at food banks grow and Americans worry about getting enough to eat, farmers have had to destroy produce, smash eggs and dump milk as the demand from restaurants, hotels and schools has drastically declined in the coronavirus pandemic.
Now, the Department of Agriculture plans to spend $300 million on surplus produce, milk and meat and ship it to food banks. States have also joined the effort: New York is giving food banks $25 million to buy products made from extra milk produced on farms in the state.
Even college students have stepped in, renting trucks to rescue unsold onions and eggs from farms. They have created a website that connects farmers and food banks around the country.
But the combined efforts are only a “drop in the bucket,” said Jackie Klippenstein, a senior vice president of the Dairy Farmers of America, the largest dairy co-op in the United States. The co-op has diverted almost a quarter of a million gallons of milk to food banks.
And more food is coming — California strawberry growers are fretting about how to sell their goods, with peak harvest season approaching in May.
“Time is not on our side,” said Mary Coppola, a vice president at the United Fresh Produce Association, a trade group of fruit and vegetable growers and processors. “In my own personal opinion, we are not coming up with the supply-chain logistical solutions as quickly as produce is growing.”
FIGHTING FOOD WASTE Read our full story on plans to distribute onions, strawberries and eggs from farms to food banks.

Amazon and Target are the focus of renewed labor protests over the health risks of working during a pandemic.
In addition to earlier demands to keep workers safe, the protests featured a newer goal: to discourage employers from rolling back safety measures in a rush to return to business as usual, especially as states lift stay-at-home orders.
The companies are not unionized, and the scattered protests on Friday were organized ad hoc.
Some Amazon workers said they were alarmed that the company was ending a policy of unlimited unpaid time off, which many workers had taken advantage of to avoid coronavirus exposure in warehouses.
Jordan Flowers said he had declined to return to work Friday at an Amazon warehouse on Staten Island. “They’re going to have to fire me,” said Mr. Flowers, who joined more than a dozen people, not all of them employees, in a protest nearby. “I choose my life over this.”
An Amazon spokeswoman said that there was “no measurable impact on operations” from the protest and that the company was extending a $2-an-hour pay increase and double overtime pay in the United States and Canada through May 16. She did not dispute that the policy on unpaid time off had changed but said Amazon was providing a range of other leave-of-absence policies.
At Target, some workers expressed concern that the company was again allowing customers to return goods to stores, a practice that had been suspended to reduce potential virus exposure.
“That’s a point of frustration,” said Adam Ryan, a Target worker in Christiansburg, Va., who helped organize a protest there. “When they stopped accepting returns from guests, we thought that was a good call.”
A Target spokeswoman confirmed that returns were again being accepted in stores, citing cleaning, safety and social distancing measures now in place. She said that the company knew of fewer than 10 of its 340,000 front-line workers who had taken part in the protest, and that it had extended a $2-an-hour wage increase until May 30.

The federal government has distributed stimulus loans worth more than $1 billion to public companies as part of a program meant to protect payrolls at small businesses, according to an analysis of public filings and company announcements by The New York Times.
In total, more than 300 publicly traded firms have disclosed receiving loans from the roughly $660 billion Paycheck Protection Program, which is administered by the Small Business Administration.
The loans have set off an outcry, and led the agency to issue new guidance pushing the public companies to return the money, especially as many smaller operations were left empty-handed in the early stages of the program. In recent weeks, at least 32 public and private companies have disclosed that they had returned loans, including the burger chain Shake Shack and car dealerships like AutoNation.

Approximately 36,000 employees of news media companies have been affected by layoffs, pay cuts or furloughs since the coronavirus crisis began in earnest in the United States in March, according to New York Times estimates.
Recent weeks have brought layoffs at The New York Post and Protocol, while other outlets, such as Condé Nast, continue to ponder them. But on the other hand, the hundreds of billions of dollars in federal stimulus money have begun to arrive in bank accounts. The Vermont weekly newspaper Seven Days even brought five laid-off employees back after receiving its Paycheck Protection Program loan. But such loans still may not go to newspapers owned by large chains.
This week, the general public will begin to get a fuller look at how the crisis has affected newspapers in particular as Gannett, Lee Enterprises and The New York Times Company all make their quarterly earnings reports.

Catch up: Here’s what else is happening.

News | Business | Economy | US: U.S. economy plunges 31.4% in the second quarter but a big rebound is expected