Stock futures pointed to big losses on Wednesday as the markets remained highly volatile with the government response to the fallout still unfolding.
A violent reversal in Treasury yields in response to a potential $1 trillion stimulus package helped to unnerve investors.
Around 6:42 a.m. ET, futures on the Dow Jones Industrial Average indicated a more than 1,000-point loss at Wednesday’s open. S&P 500 and Nasdaq-100 futures were also down. Futures contracts for the indices were in “limit down” territory, a situation where trading is halted after futures have hit a 5% loss and can go no lower. The S&P 500 gained 6% on Tuesday. 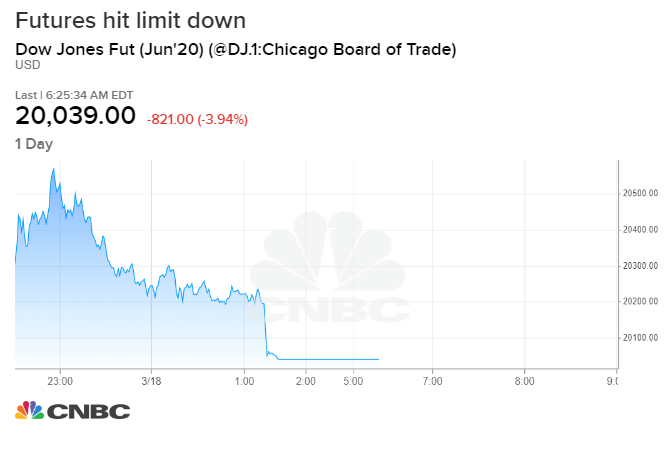 Exchange-traded funds that track the indexes are not subject to limit-down restrictions, however, and suggested what the open would look like. The SPDR S&P 500 ETF was down 6% in premarket trading, the SPDR Dow Jones Industrial Average ETF was down 6.5%, and the Invesco QQQ Trust was off 5.8%.
Wall Street has been on an unprecedented roller-coaster ride amid the turmoil, with the S&P 500 swinging 4% or more in either direction for seven consecutive sessions. This tops the previous record of six days from November 1929, according to LPL Financial. The S&P 500 is 25% off its record high through Tuesday’s close.
The 10-year Treasury yield jumped to 1.13% Wednesday after trading around 0.77% midday Tuesday before details of the potential stimulus emerged. It began the week at around 0.65%. It wasn’t the outright rate level that caused uneasiness among traders, but the rapid nature of the move overnight.
On Tuesday, CNBC learned the White House is weighing a fiscal package of more than $1 trillion that includes direct payments to Americans and financial relief to small businesses and the airline industry. Treasury Secretary Steven Mnuchin also said separately at a press conference that corporations will be able to defer tax payments of up to $10 individuals could defer up to $1 million in payments to the Internal Revenue Service.
“When you decimate the restaurant industry, the travel industry, the hotel industry, the airline industry cruise line industry, obviously you’re going to take a huge divot out of economic activity,” Capital CEO Jeffrey Gundlach said on a webcast Tuesday after the bell. Gundlach the odds of a recession at 90% and said it was “ludicrous” to think otherwise.
Gundlach also commented on the reversal higher in Treasury yields, noting it could put the U.S. the uncomfortable position of having both a weak economy and rising rates, as new debt issuance to pay for the stimulus floods the bond market.
Treasuries are the latest market to see extreme moves. The recent overnight trading of futures contracts has seen unusual volatility, leaving many investors to believe computer trading has exaggerated moves in the market’s collapse stemming from the outbreak.
The movement comes amid historic highs on the Cboe Volatility Index, which closed above its 2008 financial crisis peak on Monday. That index looks at options prices for the S&P 500 and is also known as the “fear gauge” of Wall Street.
On Tuesday, the markets rebounded from their deepest rout since 1987 as investors grew hopeful that the Trump administration’s massive fiscal stimulus plans will rescue the economy, which is at risk of falling into a recession due to the impact.
told Republican senators that unemployment could reach 20% if Congress doesn’t enact the trillion-dollar stimulus package he proposed, CNBC reported Tuesday evening, citing a source familiar with the matter.
The Dow soared more than 1,000 points on Tuesday to cap off another volatile session, making back less than half of Monday’s steep losses.
On Tuesday, investors also cheered the Federal Reserve’s -up effort to help companies having a hard time getting short-term funding. The bank announced a special credit facility to purchase corporate paper from some issuers. This follows the Fed’s emergency $700 billion quantitative easing program and a further 100 basis point cut interest rates on Sunday.
“Signs are that the pandemic will be brought under control and that the economy will get enough support to weather the storm,” said Brad McMillan, chief investment officer at Commonwealth Financial. “Make no mistake, there will be damage. But from a market perspective, the question will be whether the damage is greater than markets now expect, or less.”

—CNBC’s Eustance Huang and Christine Wang contributed to this report.

Email ThisBlogThis!Share to TwitterShare to FacebookShare to Pinterest
Labels: Futures Indicator, US Market