US Market | Futures Indicator: US futures point to higher open on Wall Street with virus and earnings in focus

2minutes - Source: CNBC
U.S. stock index futures are pointing to a higher open on Wall Street Tuesday as stocks look to continue Monday’s rally.
At around 2:30 a.m. ET, Dow futures were up 57 points and indicated an implied positive open of more than 70 points, while futures on the S&P 500 and Nasdaq were also higher.
Investors continue to monitor news on the coronavirus outbreak, after China’s National Health Commission on Monday night said the death toll had risen to 1,016 people with 42,638 confirmed cases.
However, fears over the economic fallout from the outbreak have been offset by positive economic indicators. Both the S&P 500 and Nasdaq Composite closed at fresh record highs on Monday, while the Dow Jones Industrial Average jumped more than 170 points.
President Donald Trump unveiled his $4.8 trillion budget plan for the coming fiscal year on Monday, drawing rebukes from congressional Democrats over its plan to cut Medicare, Medicaid and Social Security despite the president’s repeated promises to protect them.
The budget proposed $150 million to create a U.S. uranium reserve in order to aid ailing producers, along with a $25.2 billion budget for NASA, the agency’s largest in decades.
Fourth-quarter and full-year earnings remain in focus, with Hasbro and Under Armour among those reporting before the bell on Tuesday, while numbers are due out of Lyft and Western Union after the close of trading.
On the data front, January NFIB business optimism figures are expected at 6:00 a.m. ET and JOLTS job openings for December are due at 10:00 a.m. ET.
at February 11, 2020 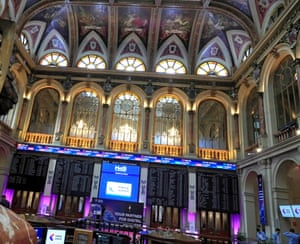