FRANKFURT/ZURICH (Reuters) - Dozens of drugmakers are conducting human trials for a record 89 therapies that pair antibodies with toxic agents to fight cancer, evidence of renewed confidence in an approach that has long fallen short of its promise, an analysis compiled for Reuters shows.

These antibody-drug conjugates, or ADCs, from companies including AztraZeneca and GlaxoSmithKline, are described by researchers as “guided missiles” packing a powerful anti-cancer punch.
They are engineered to zero in on tumors and then release cytotoxins that deliver up to 10,000 times the potency of standard chemotherapy, while minimizing damage to healthy tissue.
The approach has for decades been a major biotech industry focus. Many experimental ADCs, however, failed due to the complexity of pairing the right antibody with the appropriate toxic agent. Some were abandoned as too weak; others were too harmful.
From 2000 to 2018, only five ADCs won approval. Just one, Roche’s (ROG.S) Kadcyla, approved in 2013 for breast cancer, has surpassed $1 billion in annual sales after data last year showed it boosted disease-free survival for some patients compared with the standard treatment, Roche’s Herceptin.
Over time, however, scientists devised better ways to connect payloads and antibodies and more precisely reach tumors. There is a growing understanding, too, of how to design ADCs to kill even surrounding cancer cells that previously evaded destruction.
“What we’re seeing now are the benefits of the science becoming mature,” said ADC pioneer Chris Martin, CEO of Switzerland’s ADC Therapeutics ADCT.N. “It took at least a decade, probably more like 15 years, to really begin to turn the art into a science.”
In 2019, U.S. regulators approved three ADCs, the most ever in a single year, as last-ditch treatments based on studies showing they helped patients whose survival outlook was bleak.
They include AstraZeneca’s (AZN.L) and Daiichi Sankyo’s (4568.T) breast cancer drug, Enhertu, which was shown to help patients who had failed numerous previous treatments survive a median of more than 16 months before their disease worsened.
Astellas’ (4503.T) and Seattle Genetics’ (SGEN.O) bladder cancer drug, Padcev, also received expedited approval in December, based on evidence that 44% of patients who had failed immunotherapy showed improvement, and in some cases, no evidence of cancer, when they were assessed after treatment.
Roche’s (ROG.S) Polivy was green-lighted against lymphoma in June after producing complete response rates, with no signs of disease, in 40% of patients when combined with two other therapies.

While all three drugs must prove their mettle in further studies, the industry is growing optimistic that ADCs’ time may have arrived.
The number of ADC drug candidates is at unprecedented levels, according to data from consultancy Beacon Targeted Therapies compiled for Reuters, based on a review of companies’ pipelines. Dozens more ADC prospects are in pre-clinical review.
London-based Beacon advises drugmakers on targeted therapies, helping them decide whether to pursue prospective drugs or redirect efforts, based on industry trends.
Current ADC projects include GlaxoSmithKline (GSK.L) testing its belantamab mafodotin against multiple myeloma.
ADC Therapeutics, part-owned by private equity firm Auven Therapeutics, has several studies on experimental drugs, including with Danish partner Genmab (GMAB.CO), on blood cancers and solid tumors.
U.S. biotech Immunomedics’ (IMMU.O) market capitalization gained more than 60% to $4.3 billion in the last six months, ahead of the U.S. Food and Drug Administration’s late-December decision to review its ADC against triple-negative breast cancer, which is hard to treat and has poor prognosis.
Massachusetts-based ImmunoGen (IMGN.O), hit by past trial failures, got a lift in December for its ADC against ovarian cancer when the FDA indicated it may become a candidate for accelerated approval.
The surge in ADC investment has been fueled, in part, by improvements in the so-called “linker” technology that binds the antibody to its cancer-killing toxins, keeping them stable in the circulatory system until the poison can be unleashed on the targeted tumour.
ADCs are generally delivered via repeated infusions, similar to chemotherapy.
“There is a revival again because there is a new generation of molecules in which the linker is more efficient,” Giuseppe Curigliano, clinical director of early drug development at Milan’s European Institute of Oncology, told Reuters.

This optimism has contract manufacturers like Merck KGaA (MRCG.DE) and Lonza (LONN.S) ramping up facilities, in hopes drugmakers will farm out complex ADC production.
Merck expects the overall ADC market to grow by more than 20% in coming years, boosting its business, which includes manufacturing of monoclonal antibodies, linkers and cytotoxic agents.
Rival Lonza, which helps make Roche’s two ADCs and sees annual 9% growth for the so-called bioconjugates market, is investing millions of dollars in its Swiss site, where it produces ADCs for other drugmakers.
“What we see over time at Lonza is a good request for capacity,” said Iwan Bertholjotti, Lonza’s bioconjugate commercial development head. “That’s a good sign that the market is booming.”
GRAPHIC: Global ADC clinical pipeline here 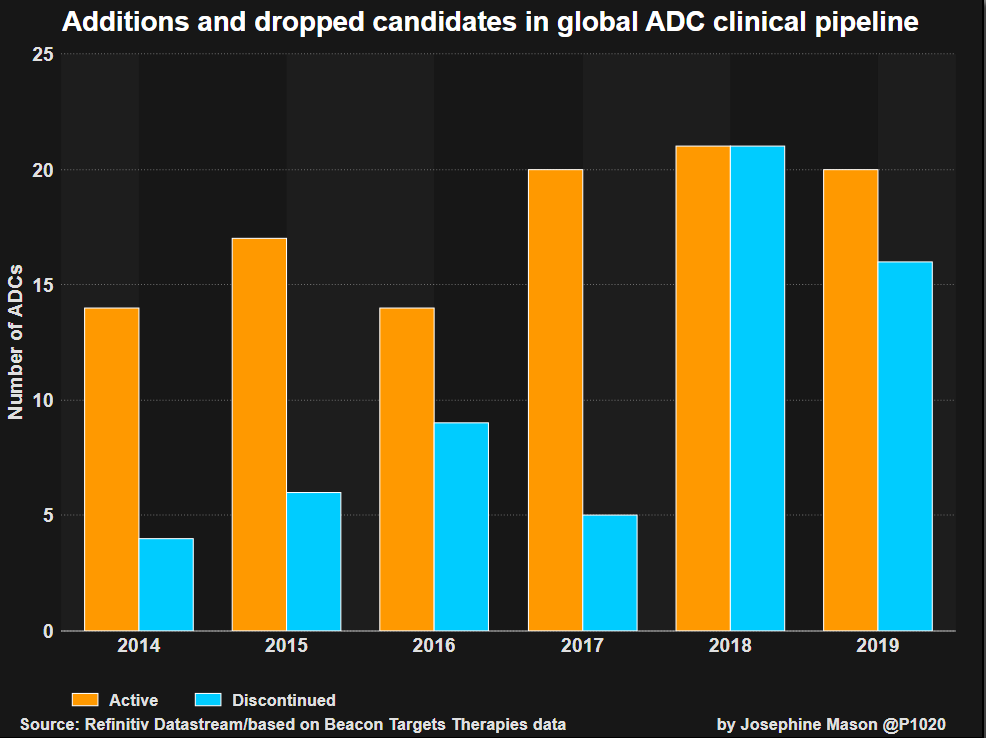 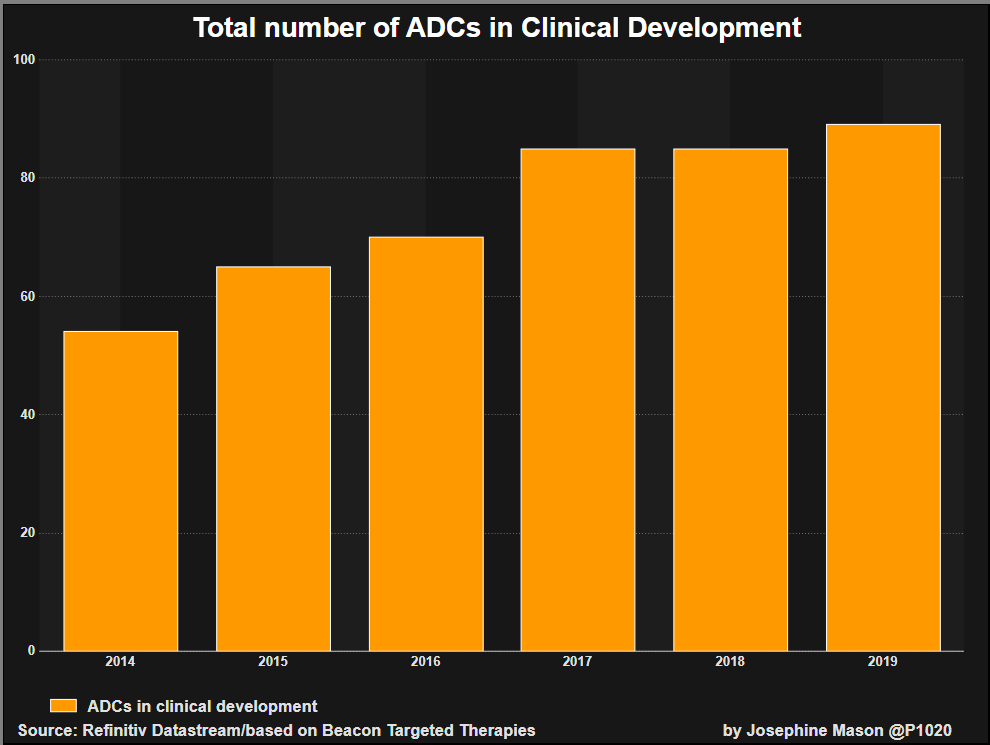 Still, enthusiasm is not universal.
AbbVie (ABBV.N) in August abandoned its ADC candidate Rova-T after flunking a lung cancer trial and wrote off most of the $5.8 billion it paid for the drug’s developer, Stemcentrx, in 2016.
Roche, which helped pioneer ADCs with Kadcyla and Polivy, has also backed off. In 2013, the Basel-based company had about a dozen experimental ADCs. Today, only one remains, and it is being developed for Staph infections, not cancer.
“We have shifted our technology priorities,” Roche CEO Severin Schwan told Reuters. “Maybe others will be luckier, but we failed to master the complexity.”
AstraZeneca aims to do just that.
In March, the Cambridge, England-based drugmaker struck a $7 billion deal with Japan’s Daiichi Sankyo for rights to Enhertu, getting $1.35 billion up-front, and more if it challenges Roche drugs’ dominance in breast cancer.
Some industry analysts see Enhertu sales eventually reaching up to $7 billion annually.
“Our plan is to expand the number of studies in different tumor types,” said Gilles Gallant, head of oncology R&D at Daiichi Sankyo. “This agent has potential.”

Reporting by Ludwig Burger in Frankfurt and John Miller in Zurich; Editing by Michele Gershberg and Dan Grebler
at January 06, 2020

From Monday to Friday and occasionally on Saturday and Sunday.