China coronavirus: The confirmed cases and where they are 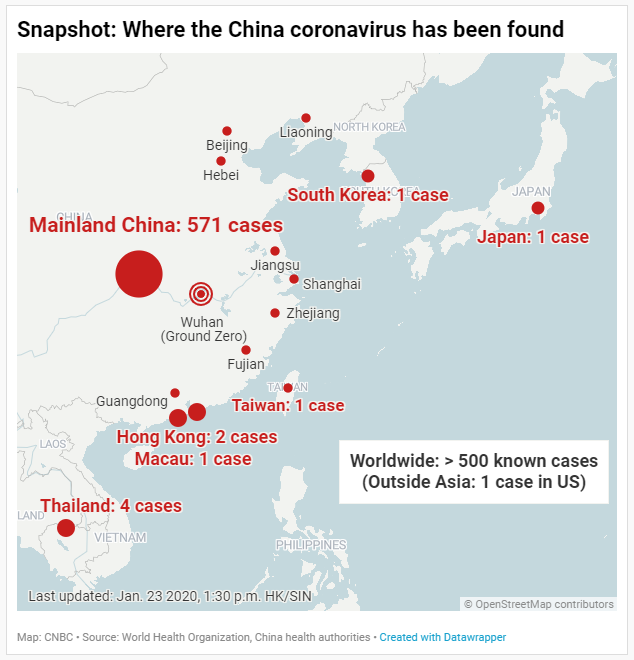 A new strain of virus that was first reported in China has killed 17 people and infected nearly 600 others.
Sometimes referred to as the Wuhan virus, it has been temporarily named the “2019-nCoV” and belongs to a family of viruses known as coronaviruses, which can be transmitted from person to person.
The deadly pneumonia-like disease was first identified on December 31, 2019, in the Chinese city of Wuhan in Hubei Province. It has since spread beyond Wuhan to major cities such as Beijing, Shanghai, Macau, and Hong Kong. Abroad, Thailand has confirmed cases, and the United States, Taiwan, South Korea, and Japan have each reported one case.
China’s capital city Beijing canceled major public events including two well-known Lunar New Year temple fairs, the state-run Beijing News said on Thursday, as authorities try to curb the spread of a deadly coronavirus outbreak.
Separately, the country’s railway operator, China State Railway Group, said passengers would be able to receive full refunds on tickets nationwide starting on Friday.
On Thursday, China put on lockdown the two cities at the epicenter of a new coronavirus outbreak. Most transport in Wuhan, a city of 11 million people, was suspended on Thursday morning and people were told not to leave. Hours later, state media in neighboring Huanggang, a city of some 6 million people, said it was imposing a similar lockdown.
Wuhan’s city government said it would shut down all urban transport networks and suspend outgoing flights from 10 a.m. (0200 GMT). Domestic media said some airlines were operating after the deadline, however.
State media broadcast images of one of Wuhan’s transport hubs, the Hankou rail station, nearly deserted, with gates blocked or barred. The government is urging citizens not to leave the city.
State media reported highway toll booths around Wuhan were closing down, which would effectively cut off road exits. Guards were patrolling major highways, one resident told Reuters.
Similar measures will take effect starting Friday in the nearby city of Ezhou. Theaters, internet cafes and other entertainment centers were also ordered closed, further increasing the economic costs of the response to the outbreak.
“The lockdown of 11 million people is unprecedented in public health history, so it is certainly not a recommendation the WHO has made,” Gauden Galea, the World Health Organization’s representative in Beijing, told Reuters.
The World Health Organization is debating on whether it should classify the outbreak a global health emergency.
Here’s a snapshot of the number of known cases and where they are, as well as confirmed deaths.