Market Insider on Sunday 1, December 2019: December could be a good month for the stock market, but there's one big risk

The Charging Bull near Wall Street is pictured in New York.
Carlo Allegri | Reuters
Stocks have had a bang-up year so far, and they’re heading straight into the month that is often the best of all.
The S&P 500 is up more than 25% for the year. Thanksgiving week was technically positive for the market, with the small cap Russell 2000 breaking out, joining other indexes in an uptrend.
Stocks, however, were lower Friday in sluggish trading after the Thanksgiving holiday. Through Wednesday, the Dow, Nasdaq and S&P 500 had all popped to new record highs, with consumer discretionary and tech names leading the market higher this past week. The Russell 2000 is not yet back to its highs, but it pushed above its previous 52-week high, in a healthy sign for the overall market.
In the coming week, investor focus will move more intently to the topic of trade, and that is what will make or break the rally at year-end.
President Donald Trump has promised that a preliminary trade deal with China is close, but there still is no agreement and the Dec.15 deadline for new tariffs is getting closer. Trump’s signing of legislation Wednesday supporting the Hong Kong protesters drew a negative reaction from Beijing and adds more uncertainty to trade talks.
The health of the economy is also a factor for markets, and there is some key data, with the ISM manufacturing report on Monday followed by the government’s all-important monthly jobs data on Friday.

2019 has turned out to be a very good year for the market, with the Jan. 1 to Thanksgiving Day period the 14th best for the S&P 500 since 1928, according to Bespoke. The 25.5% gain in the S&P 500 was the best for the period since 2013, and now the market enters a typically strong period.
“December is the best month of the year. The S&P is up 1.6% on average. It also has the highest frequency of advances, up 76% of the time,” said Sam Stovall, chief investment strategist at CFRA. December is also the least volatile month of all, but it could see some bumps.
“The market tends to go through a mid-December low, which then represents a good buying opportunity, at least through the end of January,” Stovall said, adding he thinks the decline would be no more than 5%. “I don’t think we need a big pullback or a correction. A mid-single digit decline would be sufficient.”
Stovall said 2019 was set up to win because of the way the year started, following the sharp sell-off last December. When the months of January and February are higher, the S&P 500 has an average total return of 24%, according to data going back to 1945. If the following year does not see have a similar double gain in January and February, it still does fairly well with a normal average return of 8% to 9%, he said.
The market’s performance for the entire year also bodes well for a positive move into year-end, according to Bespoke. Since 1928, when stocks are up 20% or more by Thanksgiving, like this year, the S&P 500 usually ends the year even higher, with an average gain of 1.8% between Black Friday and New Year’s Eve, Bespoke noted. 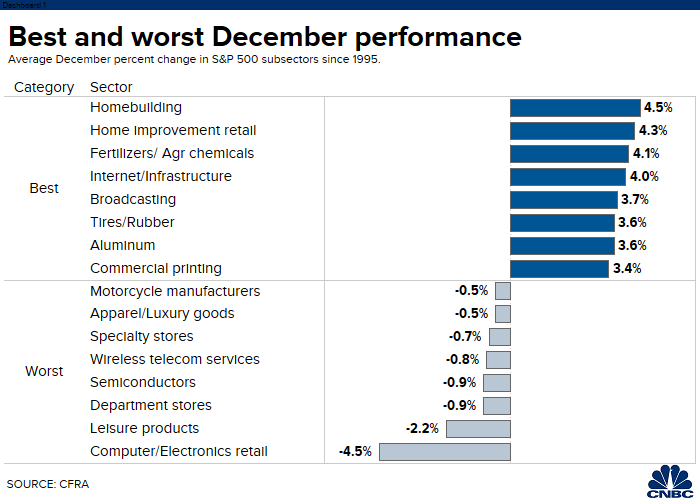 Stovall also looked at sector performance for December, going back to 1995 and found that some of the worst performing S&P sub-industry sectors were retail oriented and are highly dependent on good holiday sales. On average, computer and electronics retailers were weakest, off 4.5%, followed by leisure products off 2.2% and department stores, off 0.9%. Specialty stores and apparel and luxury goods were also among the 10 poorest performers.
While 87% of the sub-industry sectors were positive, the top performer was homebuilding, up 4.5 %, followed by home improvement retail.
“You want to buy now what nobody wants to own,” said Stovall, noting the market is forward pricing so investors are looking ahead to building activity picking up in spring and summer when they dip into homebuilders. Companies that sell fertilizers also do well in December.
Stocks on Friday closed out their best monthly performance since June. The S&P 500 was up 3.4% to 3,140, and the Dow closed Friday at 28,051, up 3.7% for the month of November.
Technology was the best performing sector for the month, gaining 5.2%. That helped drive the Nasdaq up 4.5% for the month to 8,665.
Biotech was also a top performer, helping lift the Russell 2000, which gained 4% in November to 1,624. The IBB iShares Nasdaq Biotechnology ETF was up 11% for the month.

The big risk to the market in December is the outcome of trade talks, but economic reports will be important as investors continue to assess whether the Fed was right in ending its rate cuts.
The economy has shown some signs of picking up, and a string of improved data has led economists to look for better growth in the fourth quarter. But the critical driver of growth continues to be the consumer, so holiday sales will be an important indicator to watch.
Employment data remains the most important of the economic reports, since a strong labor market is crucial for consumer confidence and spending.
Economists expect the economy added 183,000 jobs in November, according to Refinitiv. The economy added 128,000 jobs in October, even with the negative drag of 46,000 striking GM workers and the reduction of 17,000 federal government jobs, due to the end of temporary employment for Census workers.
“For the employment report, we think one factor that is likely to result in a slightly stronger headline payroll number is the fact we will now count the GM workers that were on strike,” said Barclays economist Pooja Sriram. “We estimated 36,000 to 40,000 were left out of the report in October. We think they’re to be counted as part of the November report. Much of that is going to be seen in private payrolls and especially in manufacturing payrolls.”
In October, ISM manufacturing activity improved, and even though it remained in contraction, some economists said the slowdown may be showing signs of bottoming.
The ISM index is expected to be at 49.4, still shy of 50, which shows expansion, but better than October’s 48.3. “We still think it’s going to be a sub-50 print,” said Sriram.
October’s durable goods report showed a surprise gain in business investment when economists had expected to see contraction.
Sriram said the speed of decline in manufacturing has certainly slowed, and she is watching the data closely. “I don’t think we’re comfortable saying we bottomed,” she said.
OPEC and Russia hold meetings in Vienna on Thursday and Friday, and analysts expect them to extend their production cutting agreement. However, Russia may seek to change the rules for how it counts its petroleum output, so the meeting may not be as predictable as expected, some analysts say.