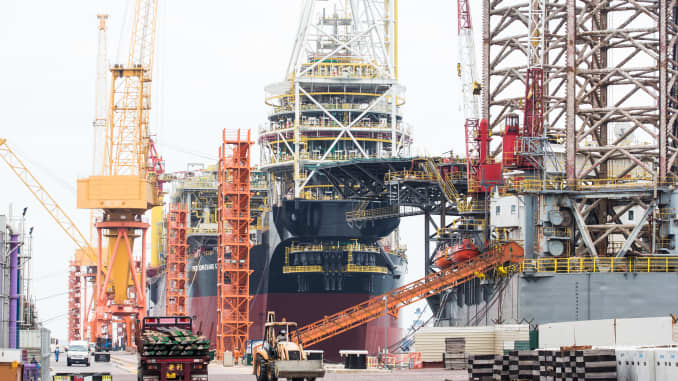 The Tullow Oil Plc Prof. John Evans Atta Mills Floating Production Storage and Offloading vessel sits docked in Singapore on Jan. 21, 2016.
Nicky Loh | Bloomberg | Getty Images
Oil eased on Wednesday after a report showing U.S. crude inventories grew unexpectedly last week and gasoline stocks surged, but losses were limited by optimism that a U.S.-China trade deal would be reached soon.
Brent crude futures fell 27 cents, or 0.4%, to settle at $64.00 a barrel. U.S. West Texas Intermediate crude fell 30 cents, or 0.5%, to settle at $58.11 a barrel.
WTI trade volumes were also on track to be lower for the week ahead of the U.S. Thanksgiving holiday.
U.S. crude stocks swelled by 1.6 million barrels last week as production hit a record high at 12.9 million barrels per day and refinery runs slowed, the Energy Information Administration said. Analysts in a Reuters poll had forecast a drop of 418,000 barrels.
The more bearish news from the EIA was that U.S. gasoline inventories soared 5.1 million barrels, compared with expectations for a 1.2 million-barrel gain.
U.S. gasoline futures dropped 3.63 cents, or 2.1%, to $1.67 a gallon.
“Overall, the inventories were disappointing, led by a much greater-than-expected increase in gasoline inventories,” said Andy Lipow, president of Lipow Oil Associates in Houston. “That’s definitely leading the way down.”
Oil prices pared losses slightly after a report showing U.S. oil drillers reduced the number of drilling rigs for a record 12 months in a row, despite fresh production highs.
Drillers cut three oil rigs in the week to Nov. 27, bringing the total count down to 668, the lowest since April 2017, energy services firm Baker Hughes Co said in data released two days early due to the U.S. Thanksgiving holiday on Thursday.
Hopes that Beijing and Washington would strike a trade deal limited losses in oil.
Prices had risen for the last two days on expectations that China and the United States, the world’s two biggest crude users, would soon sign a preliminary agreement, signalling an end to their 16-month trade dispute.
“Trade deal optimism persists,” said Tamas Varga of oil broker PVM. “The belief in a positive trade deal continues unabated.”
That was fuelled by comments from U.S. President Donald Trump on Tuesday, who said the United States and China were close to agreement after top negotiators spoke by telephone and agreed to keep working on remaining issues.
Expectations that the Organization of the Petroleum Exporting Countries and allies such as Russia will maintain their deal to restrain supply have supported prices.
The producers, known as OPEC+, hold their next oil policy review meetings on Dec. 5-6 in Vienna. They are expected to extend their supply cut agreement further into 2020.
at November 27, 2019