The Bank of England (BOE) held interest rates steady on Thursday, opting not to adjust borrowing costs in the world’s fifth-largest economy ahead of a snap election.
With 35 days to go before Britons head to the ballot box, the BOE’s nine-member Monetary Policy Committee (MPC), led by Mark Carney, voted to hold interest rates at 0.75%.
Seven policymakers, including Carney, voted in favor of leaving interest rates unchanged, but Jonathan Haskel and Michael Saunders surprised financial markets by voting for a quarter-point rate cut.
Sterling traded at $1.2811 shortly after the announcement, falling over 0.3%. 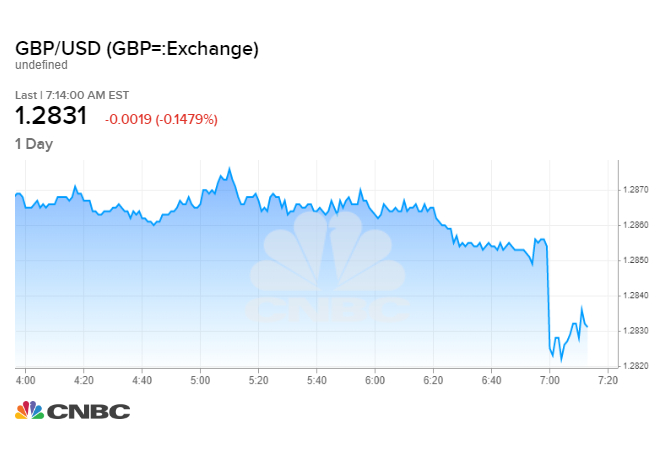 Saunders and Haskel said their vote for an interest rate cut was driven by reduced job vacancies and downside risks from the global economy and Brexit.
Other members of the MPC suggested a willingness to cut rates over the coming months, if necessary, but did not vote in favor of lower borrowing costs in November because the U.K. economy had performed largely in line with expectations from three months ago.
“With the risk of a no-deal Brexit falling recently, we expect the uncertainty facing households and businesses to fall. We also expect global growth to recover gradually,” the BOE said in its Monetary Policy Report.
The central bank suggested these developments would help growth in the U.K., but conceded if that does not happen then it “may need to lower interest rates to support U.K. growth and ensure that we return inflation to our 2% target sustainably.”

Much has changed in British politics since the MPC last voted to leave interest rates unchanged in mid-September.
Prime Minister Boris Johnson ultimately failed to rush his Brexit deal through Parliament, prompting the Conservative Party leader to request a Brexit extension and call a snap vote for December 12.
The EU agreed to push back the Brexit deadline until the end of January, with an earlier departure possible should U.K. lawmakers ratify their divorce deal.
Economists believe the BOE will cut interest rates at some point next year, amid a slowing economy and Brexit uncertainty.
Ahead of the central bank’s split vote, market expectations for a quarter-point rate cut by the end of 2020 stood at 55%, according to the CME BOE Watch Tool. Shortly after Thursday’s surprise announcement, expectations jumped up to 80%.
A long-running U.S.-China trade war and a global economic downturn have prompted the Federal Reserve and European Central Bank to cut interest rates in recent months, but, so far, the BOE has resisted following suit.
at November 07, 2019