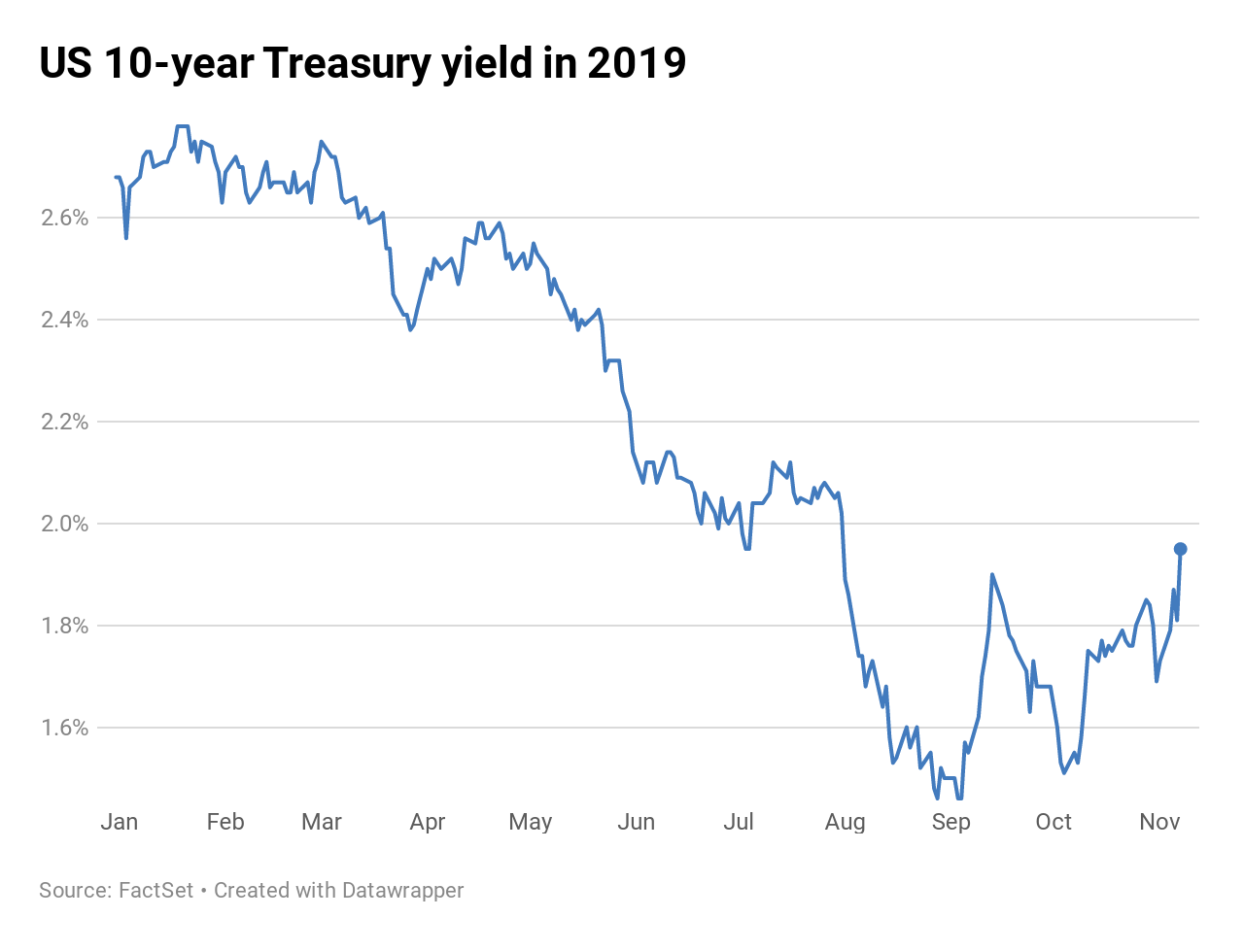 A steady climb in yields intensified Thursday afternoon with the yield on the benchmark 10-year Treasury note jumping the most since President Donald Trump’s election. The move coincided with a risk-on move by investors out of bonds and into stocks with the S&P 500 jumping to a new record on Thursday.
The 10-year yield jumped 15 basis points to 1.96%, the biggest jump since the 20-basis-point move the day after Trump was elected in 2016. The move brought the yield to its highest level since August. A basis point is 0.01%; yields rise as bond prices fall.
The yield curve, which inverted over the summer, raising recession fears, steepened to the widest since January. A dramatic, monthslong slide in the 10-year Treasury yield over the summer pushed long-term yields below rates on short-term debt, a rare market phenomenon that many economists view as a reliable recession signal.
But the recent rebound in the 10-year rate to just under 2% has corrected the yield curve’s inversion. The spread between the 10-year yield and the 2-year yield was last seen at 25 basis points; the 10-year/3-month spread was at 38 basis points.
But Thursday’s moves, though noteworthy, added to an already-sizable resurgence in yields in the foruth quarter. Since the summertime inversion and recession fears, bond yields have been ushered higher by a combination of better-than-expected corporate profits, the end of the Federal Reserve’s “mid-cycle” cuts and improvement in U.S.-China trade relations.
The 10-year yield is up 50 basis points since bottoming at a three-year low of 1.441% in early September. Half of that climb has occurred since Oct. 1, the start of the fourth quarter.
Investors dumped bonds and bought stocks amid reports that China and the U.S. have agreed to cancel additional tariffs that were imposed during their trade war. Traders are following U.S.-China trade discussions amid growing concerns that the signing of the “phase one” deal could be delayed until December.
President Donald Trump delivers remarks at a Keep America Great Rally at the Rupp Arena in Lexington, Kentucky, November 4, 2019.
Yuri Gripas | Reuters
“This is a very substantial sell-off across the curve,” said Benjamin Jeffery, rates strategist at BMO.
“Given the lack of new economic information today, it’s more a result of the positive trade war headlines and that coupled with a 30-year funding auction,” he added. “The positive trade headline was the catalyst and more technical factors are what’s driving the bulk of the move after that initial knee-jerk.”
Gao Feng, a ministry spokesperson for China’s Commerce Ministry, said that the U.S. and China agreed to simultaneously cancel some existing tariffs on one another’s goods, according to the country’s state broadcaster. The ministry spokesperson said that both sides were closer to a so-called “phase one” trade agreement following constructive negotiations over the past two weeks.
The sell-off in long-term U.S. bonds on Thursday rivaled that which occurred on the day following the 2016 presidential election, when the yield on the 10-year Treasury climbed more than 20 basis points. Investors pivoted out of bonds and into stocks on Nov. 9, 2016 as Wall Street flocked to equities in the hopes that Trump’s emphasis on deregulation and tax cuts would ultimately trigger a renewed market rally.
The S&P 500 soared more than 1% the day after Trump’s election.
The U.S. equity market posted similar gains on Thursday, as energy, communication services and financials led stocks to record highs. The Dow Jones Industrial Average rose 230 points and the S&P 500 climbed 0.45%; both hit record intraday highs.
Trump is scheduled to be in London for a gathering of NATO leaders on Dec. 3 - 4, and a potential signing could happen before or after that visit, people close to the talks told CNBC. However, China has reportedly agreed to cancel existing tariffs with the U.S. in a phased way.
The latest weekly jobless claims figures also helped buoy sentiment on Thursday. The Labor Department reported that the number of Americans filing applications for unemployment benefits fell more than expected last week, yet another signal that the U.S. jobs market remains strong.
Initial claims for state unemployment benefits decreased 8,000 to a seasonally adjusted 211,000 for the week ended Nov. 2, the government said. 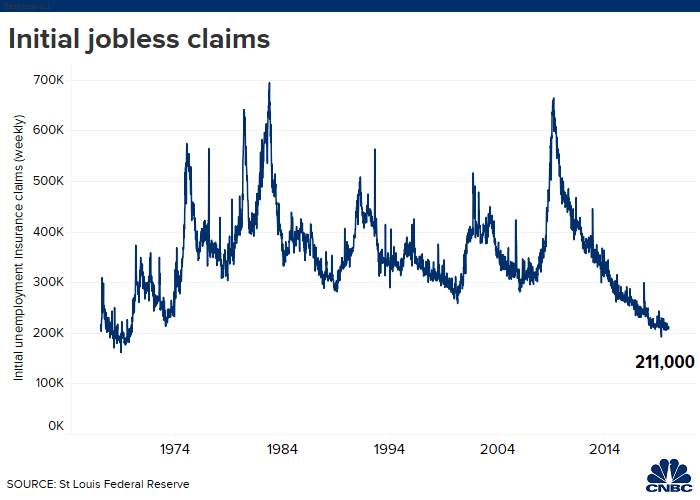 Employment grew faster than expected in October, according to the Labor Department’s update to the employment situation published last week. Firms added 128,000 jobs, even though a strike by workers at General Motors sidelined 46,000 employees at the automaker’s plants in Michigan and Kentucky.
The Treasury Department auctioned $19 billion in 30-year bonds at a high yield of 2.43%. The bid-to-cover ratio, an indicator of demand, was 2.23. Indirect bidders, which include major central banks, were awarded 58.8%. Direct bidders, which include domestic money managers, bought 20.5%.
— CNBC’s Yun Li contributed reporting.