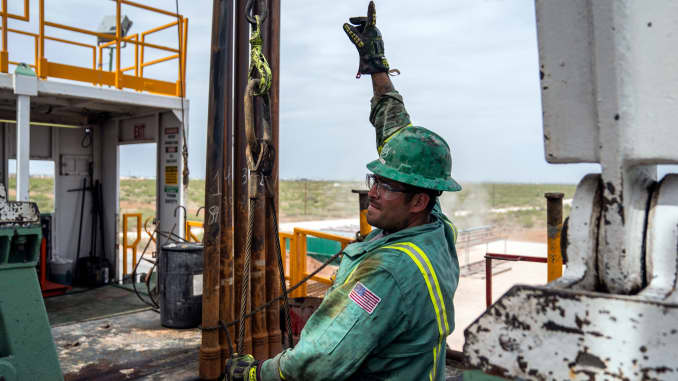 Workers extracting oil from oil wells in the Permian Basin in Midland, Texas on May 1, 2018.
Benjamin Lowy | Getty Images
Oil prices fell on Wednesday as worries about a possible delay in resolving the U.S.-China trade war, which has hurt global oil demand, competed with a price-supporting drop in U.S. crude inventories.
According to the US Energy Information Administration, US crude inventories increased by 5.7 million barrels from the previous week. US inventories are now at 438.9 million barrels, which is about 1% above the five year average for this time of year, the EIA said.
Brent crude was down 70 cents, at $60.90 a barrel. U.S. West Texas Intermediate (WTI) crude was down 92 cents, or 1.7%, at $54.62 a barrel.
The United States and China were continuing to work on an interim trade agreement, but it may not be completed in time for U.S. and Chinese leaders to sign it next month, a U.S. administration official said.
“Selling came courtesy of the fading optimism over trade and a Fed rate cut. Risk assets were dealt a blow as market players worried that the U.S. and China would delay settling their trade differences,” PVM analyst Stephen Brennock said.
However, U.S. crude inventories fell by 708,000 barrels in the week ended Oct. 25 to 436 million, compared with analysts’ expectations for an increase of 494,000 barrels, according to the American Petroleum Institute, an industry group.
Still, crude stocks at the delivery point for WTI at Cushing, Oklahoma were up 1.2 million barrels compared to the previous week, dragging on futures prices for the benchmark.
“Stocks at the WTI delivery hub have been trending higher since late September, which has put pressure on the prompt WTI time spreads, with the December/January spread this month having shifted from backwardation to a contango,” Dutch bank ING said in a note.
Investors are also awaiting the outcome of the Federal Reserve’s two-day policy meeting this week. The Fed looks set later on Wednesday to nudge along a U.S. economy that is being hampered by slowing investment and weak growth overseas. It would be the third cut this year.
A rate cut would help support oil prices as a stronger economy typically implies higher demand for crude, while falling inventories suggest the market is coming into balance.
The Organization of the Petroleum Exporting Countries and other producers including Russia have cut oil output since January to support prices.
The U.S. government’s Energy Information Administration issues its weekly inventory report at 10:30 a.m. EDT.