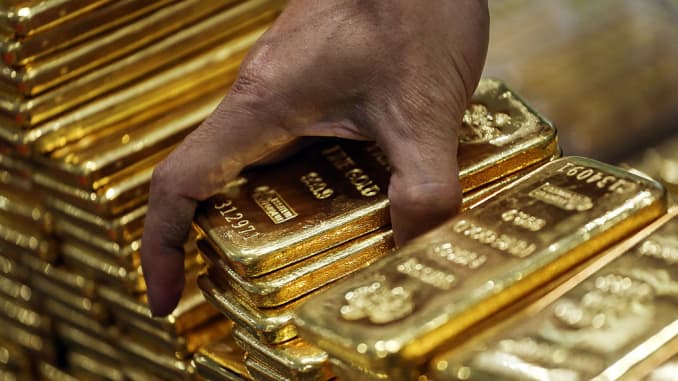 An employee arranges one kilogram gold bars for a photograph in Bangkok, Thailand, on January 13, 2016.
Dario Pignatelli | Bloomberg | Getty Images
Gold rose on Thursday as weak data from the United States rekindled fears of an economic slowdown and as concerns surfaced over possible risks to a new Brexit deal, while supply-squeezed palladium continued its record run.
Spot gold was up 0.2% at $1,492.04 per ounce. U.S. gold futures rose 0.1% to $1,495.10.
“Geo-political tensions are ratcheting back up again, the U.S. Federal Reserve will likely continue their pace on cutting rates, which will be supportive for gold,” said Phillip Streible, senior commodities strategist at RJO Futures.
Lifting gold’s safe-haven appeal, weak retail sales data and industrial output report out of the United States fanned fears about the health of the world’s biggest economy, amid prolonged Sino-U.S. trade dispute.
Also providing further support to the bullion, the dollar slipped to an over one-month low.
Earlier in the day, gold denominated in sterling had slid as much as 1.6% to its lowest since July 26 at 1,141.86 pounds an ounce after Britain and the European Union agreed to a new Brexit deal. Prices are now up about 0.3% at 1,163.64 pounds an ounce.
“There were some fears regarding the Brexit deal if it couldn’t pass through, which creates lot of uncertainty between the European Union and UK. That’s why gold futures had a little bit of bounce up,” Streible added.
Doubts emerge on chances of British Prime Minister Boris Johnson winning parliamentary ratification for the deal. The Irish border riddle remained a sticking point for Northern Ireland’s Democratic Unionist Party (DUP), which has refused to support the agreement.
On the technical front, “gold now needs to break resistance around $1,498-$1,500 area in order to brighten the short-term outlook, while a rally outside of the bull channel would be a more decisive signal for the bulls,” Fawad Razaqzada, market analyst with Forex.com, said in a note.
Among other precious metals, palladium fell 0.5% to $1,758.10 an ounce, after hitting an all-time high of $1,783.21 earlier in the session.
Palladium is crucial in the making of catalytic converters used in exhaust systems of vehicles, and concerns over its supply running out have helped lift prices by more than 41% this year alone, despite a weakening auto sector.
“Palladium market is still hampered by strengthening demand, weaker supply. Demand for the metal will continue to move higher, mainly from China,” RJO Futures’ Streible said.
Platinum gained 0.3% to $885.48 per ounce and silver climbed 1.1% higher to $17.57.