Stocks fell on Tuesday, the first trading day of a historically tough month, after the world’s two largest economies began imposing new tariffs on each other’s goods. Weak manufacturing data also dented investor sentiment.
The Dow Jones Industrial Average closed 283 points lower, or 1.1%. The S&P 500 lost 0.7% while the Nasdaq Composite pulled back 1.1%.
Equities hit their session lows after the Institute for Supply Management said U.S. manufacturing activity contracted last month for the first time since early 2016. The Dow lost as much as 1.6%, or 425.06 points. The S&P 500 and Nasdaq briefly dropped 1.2% and 1.5%, respectively.
The U.S. imposed 15% tariffs on a variety of Chinese goods on Sunday, while China imposed new charges on U.S. products from Sept. 1. It marked the latest escalation in their long-running trade war.
“That adds to the concerns on whether there is a viable path for negotiation,” said Quincy Krosby, chief market strategist at Prudential Financial. “The market is vulnerable to these moves on misery and optimism regarding the talks.”
Retail stocks fell broadly. The SPDR S&P Retail ETF (XRT) closed 1.5% lower, led by declines in Signet Jewelers and Guess. Signet dropped 9.5% while Guess lost 8.1%.
Chipmakers such as Nvidia and Skyworks Solutions fell 2% and 1.5%, respectively. Boeing and Caterpillar both declined more than 1.6% while Apple lost 1.5%. Boeing was also under pressure after a report said the 737 Max jet could remain grounded through the holiday season.
Shipping containers are loaded onto a ship at the Port of Los Angeles.
Mike Blake | Reuters
Investors loaded up on traditionally safer assets such as gold and long-dated Treasurys. Gold futures for December delivery rose more than 1%.
The 30-year Treasury bond yield traded at 1.95% after hitting an all-time low last week. The 10-year note yield fell to 1.47%. Bank stocks fell on the declining rates. Bank of America slid 1.7% while J.P. Morgan Chase fell 1.2%. Citigroup dropped 1.5%.
It’s “every country for themselves. The month of September begins with global uncertainty perhaps at its recent highs,” said Gregory Faranello, head of U.S. rates at AmeriVet Securities. “September will very likely set the tone for the remainder of this year and perhaps then some.”
Both countries have imposed tariffs on billions of dollars worth of one another’s goods since the start of 2018, battering financial markets and souring business and consumer sentiment.
President Donald Trump has said officials from both sides were still planning to meet later this month, despite rising tensions.
On Monday, Beijing filed a complaint against Washington at the World Trade Organization over U.S. import duties. China claimed the latest round of tariffs violated a consensus reached by leaders of both countries in Osaka, Japan.
Trade tensions between China and the U.S. ratcheted up last month, contributing to solid declines in August. The major indexes had their worst monthly performance last month since May. The Dow and S&P 500 lost 1.7% and 1.8%, respectively, in August. The Nasdaq dropped 2.6% last month.
September has been historically weak for stocks. Over the past 30 years, the S&P 500 has averaged a drop of around 0.5%, according to CNBC analysis using Kensho. Gold, meanwhile, gains an average of 1.7% in September. 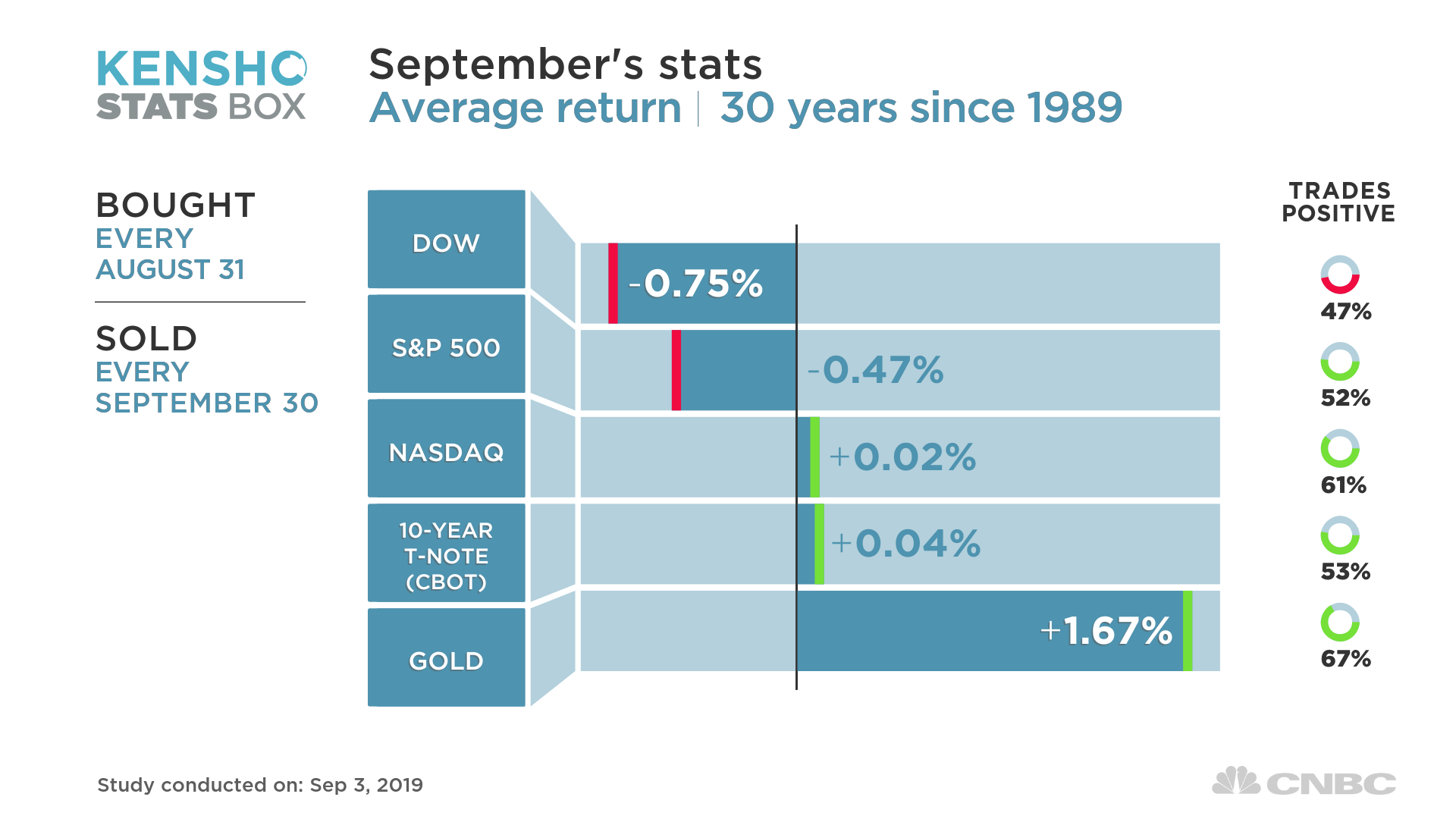