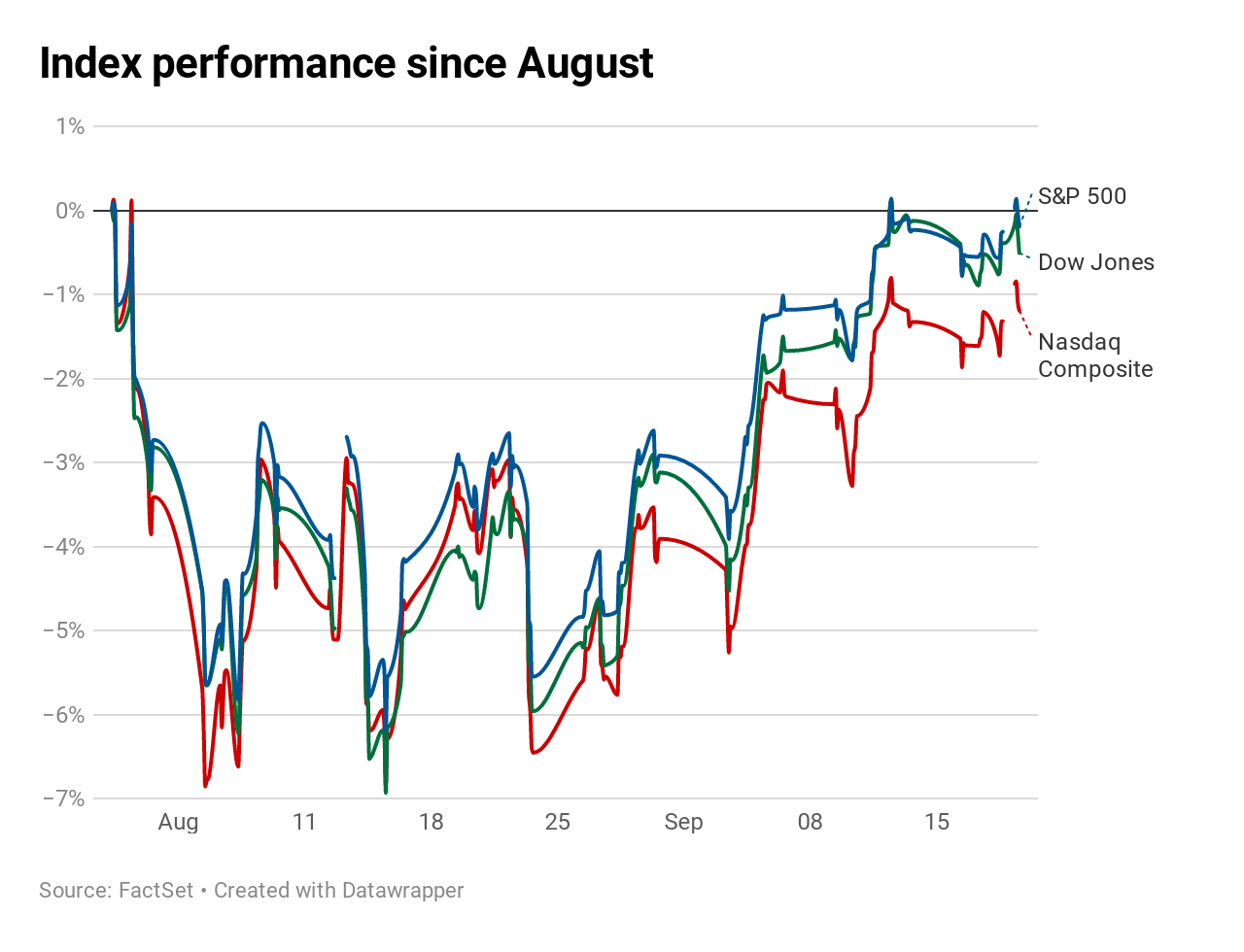 The Dow Jones Industrial Average gave up a 100-point gain and the S&P 500 backed away from an all-time high on Thursday as investors checked their optimism about renewed U.S.-China trade talks.
The Dow traded around flatline as gains in Microsoft and UnitedHealth balanced losses in Boeing and Walt Disney. The S&P 500 rose 0.1% thanks to gains in health-care and materials stocks, while the Nasdaq Composite also added 0.1% amid strength in Amazon, Facebook and Alphabet.
The S&P 500 was about 0.5% away from its record high in afternoon trading.
Equities trimmed their earlier gains after a state-backed Chinese media report said that known China hawk and Trump advisor Michael Pillsbury warned the U.S. is ready to escalate the trade war if a deal isn’t struck soon.
Stocks continued to pare gains after a tabloid editor at the official newspaper of the Communist Party of China tweeted that China was in no rush to make a trade deal with the U.S.
Despite the latest reports, Wall Street’s marginal optimism came amid a new round of face-to-face talks between Chinese and American officials that began on Thursday. The two-day negotiations are aimed at preparing for high-level talks in early October that will determine whether Washington and Beijing can progress toward a deal or resume the imposition of higher tariffs.
“In general, the market in September can be characterized as more rational: We’re at or near all-time highs and haven’t really budged from that in September,” said Art Hogan, chief market strategist at National Securities. “We’ve got U.S.-China trade becoming more constructive and there’s evidence as there’s been no escalation, there’s a little de-escalation.”
“All of that becomes a positive and the market seems to be OK when we can compartmentalize trade,” he added. “When relationships were deteriorating, the market made that the No.1 enemy.”
U.S. negotiators including White House economic advisor Peter Navarro and Treasury Secretary Steven Mnuchin have both expressed modest optimism for forthcoming rounds of talks between the world’s two largest economies following a volatile August.
Software giant Microsoft, meanwhile, climbed over 1.5% after announcing Wednesday evening that it authorized another $40 billion for share buybacks and will raise its quarterly dividend by 5 cents to 51 cents per share.
Wall Street ended Wednesday little changed after the Fed approved a rate cut of one quarter point, but offered little for investors hoping for hints that the central bank would lower borrowing costs toward the end of 2019. Officials continued to describe the U.S. labor market as “strong” and characterized GDP growth as “moderate.”
Chairman Jerome Powell, however, said that the Fed may have to resume the organic growth of its balance sheet sooner than expected to help ease money markets and prevent interest rates from rising too quickly. That could mean the the central bank is preparing to to act more often in 2020, according to Joe Terranova, chief market strategist at Virtus Investment Partners.
“I think it’s a misconception that it’s being viewed as a hawkish communication. I think that this definitely introduces — I agree with Jeff Gundlach — the possibility that the Federal Reserve is going to have to provide more liquidity,” he said.
Given the federal government’s high levels of borrowing over the past two years, “the Fed will have to be the marginal buyer once again and keep yields from uncomfortably rising,” Terranova added.
The Fed’s second rate cut of 2019 lowers the target range for the federal funds rate to between 1.75% and 2%.
at September 19, 2019