U.S. dollar bank notes are arranged for a photograph on September 7, 2017 in Hong Kong.
studioEAST | Getty Images
The dollar firmed on Wednesday after the Federal Reserve cut interest rates by a quarter of a percentage point, as expected, but gave an uncertain outlook on future easing.
The dollar index, tracking the unit against a basket of other currencies, was up 0.35% at 98.60. The dollar touched session peaks against the yen after the Fed decision, rising in seven of the last eight sessions. 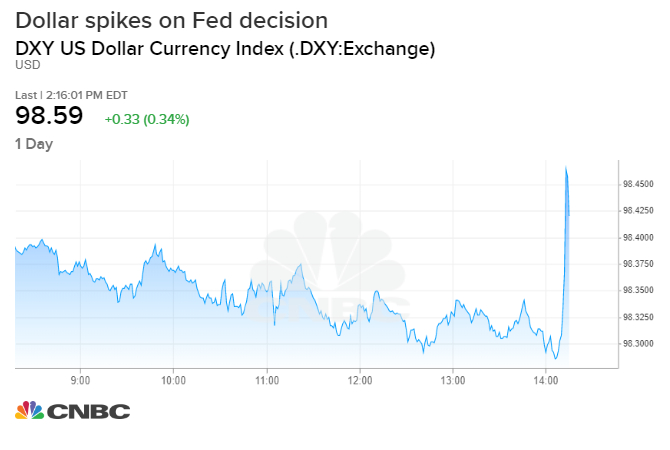 In cutting interest rates by 25 basis points for the second time this year, the Fed gave a nod to ongoing global risks and “weakened” business investment and exports. But new projections showed policymakers at the median expected rates to stay within the new range through 2020.
However, in a sign of ongoing divisions within the Fed, seven of 17 policymakers projected one more quarter-point rate cut in 2019.
“Another rate cut from the Fed to try to shield the U.S. economy from global headwinds. Today’s move was more of a hawkish easing in that the Feds median forecasts for rates suggested no more cuts this year, while some officials dissented,” said Joe Manimbo, senior market analyst at Western Union Business Solutions in Washington. “The tone of the Fed’s new forecasts remained largely sanguine despite the global risks. Consequently, the dollar isn’t likely to stray far from recent highs.”
The euro fell 0.3% to $1.1031 Aside from cutting interest rates, the Fed changed two key rates used to manage its main policy lever. It lowered the interest it pays on excess bank reserves (IOER) by 30 basis points, to 1.80%. The rate now sits 20 basis points below the top of the target range, compared to 15 basis points previously.
The Fed also set its offering rate for any necessary operations in the $2.2 trillion repurchase agreement, or repo, market, at 1.70%, five basis points below the bottom of the new target range for the policy rate.
The changes came after turmoil this week in funding markets briefly pushed the overnight bank-to-bank lending rates above the U.S. central bank’s target range.
After the Fed releases its policy decision, attention will turn to the Bank of Japan’s meeting ending on Thursday, to see whether it eases policy, too. Deepening negative rates will be an option if the BOJ eases, although the central bank may accompany that with measures to mitigate the pain on financial institutions, sources have told Reuters.
Posted by Fernando Guzmán Cavero at September 18, 2019