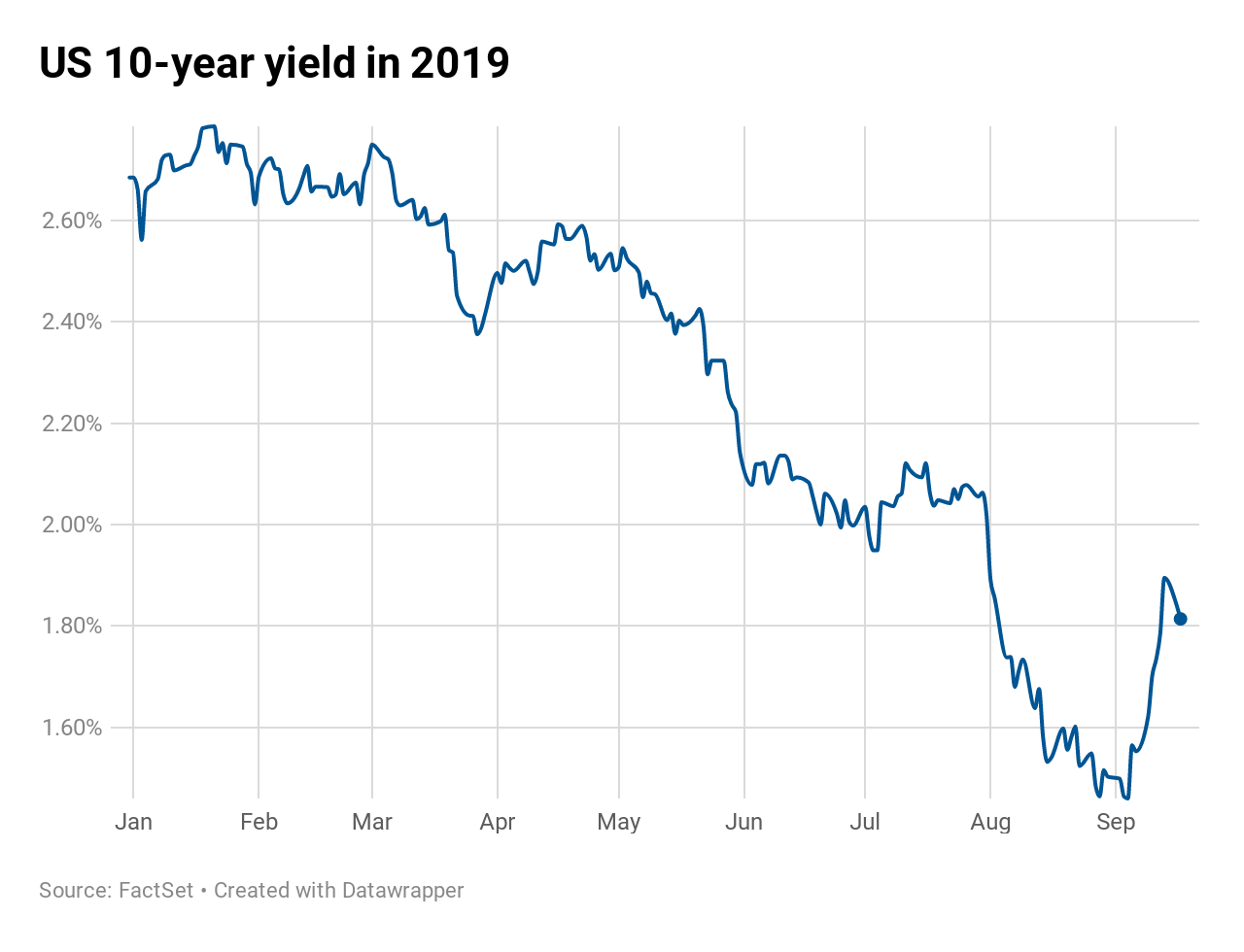 U.S. government debt yields fell Tuesday as investors monitored geopolitical tensions in the Middle East and awaited the first of a two-day meeting between policymakers at the Federal Reserve.
The yield on the benchmark 10-year Treasury note slipped to 1.803%, while the yield on the 30-year Treasury bond was also lower at around 2.27%.
The potential of a military response to attacks on two critical oil refineries in Saudi Arabia fueled a modest bid for Treasurys to start the week and lingered in fixed income markets on Tuesday. While Yemeni rebels claimed responsibility for the attack, top White House officials including Secretary of State Mike Pompeo and Energy Secretary Rick Perry have both blamed Iran for the strike.
The attack wiped out 5.7 million barrels per day of daily crude production — or 50% of the kingdom’s oil output. It has raised the prospect of a major supply shock in a market that had been focused on demand concerns in recent months.
Those fears abated later Tuesday after Saudi Energy Minister Prince Abdulaziz bin Salman said that the kingdom’s oil supply would be fully back online by the end of the month.
Elsewhere, investors are likely to closely monitor the Federal Reserve’s two-day meeting this week. The U.S. central bank is expected to cut the overnight lending rate by 25 basis points at the conclusion of its meeting on Wednesday.
Traders are beginning to see the market for what it truly is, “and that is primarily a place to hide,” wrote Kevin Giddis, head of fixed income capital markets at Raymond James. “It doesn’t really matter whether it’s a global slowdown, fear of a tariffs, or the potential for conflict in the Middle East, the response is the same: buy U.S. government debt out on the curve.”
The Fed’s decision will likely not be unanimous, however, as multiple FOMC member have signaled the need for patience amid stronger U.S. growth data and modest inflation.
The central bank also tries to foster maximum employment through tweaking interest rates; the unemployment rates was last seen at 3.7%, near historic lows.
“If you closed your eyes and thought about just the data you have seen in the last two weeks, forget all of the noise around you, would you actually lower interest rates right now?” Giddis wondered. “I feel like I am one of the few remaining bond bulls left on the planet, and even I could only get my arms around cutting rates in here for reasons of inflation, or the lack thereof.”