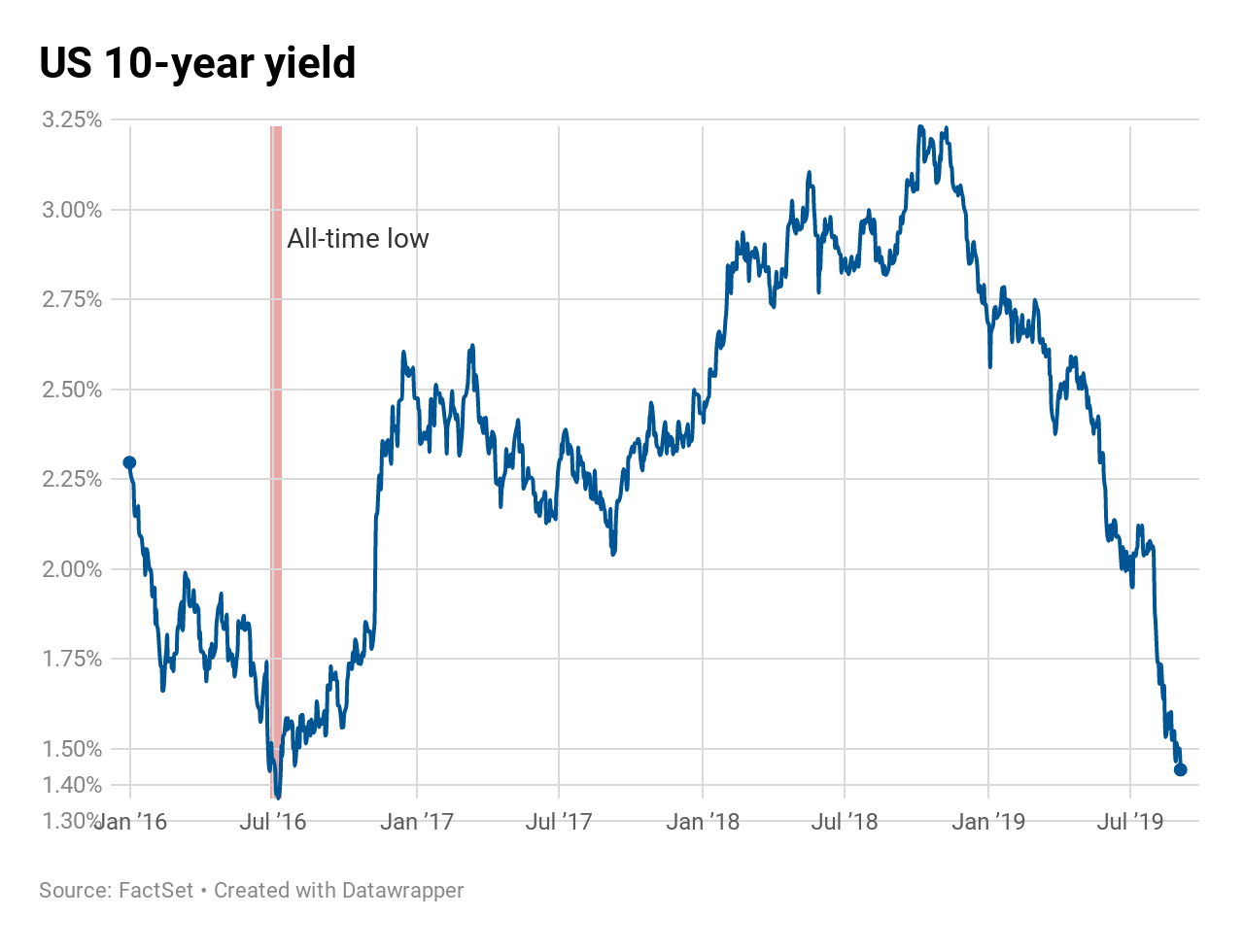 The yield on the benchmark 10-year Treasury note dove Tuesday to its lowest level since 2016 after a report on the U.S. manufacturing sector showed a contraction in August.
The Institute for Supply Management said U.S. manufacturing activity declined last month for the first time since early 2016.
The yield on the 10-year note fell to its lowest level since July 2016 at 1.441%, while the yield on the 30-year Treasury bond was also lower at 1.925%. Yields fall as bond prices rise.
“If there was any question whether or not the trade war was hurting manufacturing sentiment today’s release cleared that up with the insightful observation that ‘Comments from the panel reflect a notable decrease in business confidence,’” Ian Lyngen, head of rates research at BMO Capital Markets, wrote of the ISM number.
“The logic holds that if inventories are building faster than new orders are coming in, there is a problem on the horizon,” he added. “The trade war and issues related to the timing of cross-boarder flows have undoubtedly complicated this potentially leading indicator.”
Movements in bond markets on September’s first day of trading came after a dramatic month for fixed income. In August, the 10-year Treasury note yield fell about 50 basis points from highs above 2% to its current level. The last time the 10-year yield posted a fall of at least 50 basis in a single calendar month was January 2015, representing one of the single-largest monthly declines in the post-crisis era.
The 30-year Treasury bond yield fell to an all-time low 1.91% last Wednesday, tracking a similar swoon in rates overseas. In fact, long-term rates fell so much that yields on the 3-month and 2-year notes exceeded longer-term rates in a phenomenon known as curve inversion, a sign many investors believe to portend eventual recession.
Yields were already under pressure ahead of the ISM report as new U.S. tariffs on imported Chinese goods began over the holiday weekend, aggravating the trade war between the two countries and weighing on the global growth outlook.
The 15% duty, which took effect Sunday, will affect goods ranging from apparel and electronics to tools. Additional tariffs of 15% on $156 billion of smartphones, laptops and other electronic goods are set to take effect on Dec. 15 to avoid peak holiday shopping.
Washington and China have imposed tariffs on billions of dollars’ worth of one another’s goods since the start of 2018, battering financial markets and souring business and consumer sentiment.