Japan’s economy saw its third straight quarterly expansion in the three months that ended in June, growing at an annualized rate of 1.8% in the period, according to government data on Friday. That was much better than a median forecast for 0.4% growth.
Compared against the previous quarter, gross domestic product gained 0.4%, also beating expectations.
Capital expenditure also rose 1.5% against the previous quarter, while private consumption grew 0.6%.
“The numbers were quite above consensus and I think, in particular, the large contribution from the domestic demand part of the economy was particularly robust,” Kathy Matsui, vice chair and chief Japan strategist at Goldman Sachs Japan, told CNBC’s “Squawk Box” shortly after the data release.
“We had at Goldman, an above consensus view but ... it came in even above that estimate and I think that kind of underscores the reality, at least from our point of view, that both consumption and private (capital expenditure) remain kind of the engines of Japan’s economy at least for the foreseeable future.” Matsui said.

China’s consumer price index in July rose 2.8% on-year — its fastest year-on-year pace since February 2018, according to data from the National Bureau of Statistics. In particular, food prices soared in July to 9.1% from a year ago, amid surging prices of pork as the country battles African swine fever.
The producer price index for that period fell more than expected. It declined 0.3% year-on-year in July, the largest decline in annual terms since August 2016, Reuters reported.
Meanwhile, the People’s Bank of China fixed its midpoint for the yuan at 7.0136 against the dollar on Friday — the second time this week the benchmark rate was set weaker than 7. The onshore yuan last traded at 7.0478 against the greenback, and the offshore yuan changed hands at 7.0734 per dollar.
The Chinese currency came into sharper focus this week after it weakened past the 7-yuan-per-dollar mark on Monday for the first time since the 2008 global financial crisis and sent global markets into a frenzy.

The U.S. dollar index, which tracks the greenback against a basket of its peers, was at 97.566 after touching lows below 97.5 yesterday.
The Japanese yen traded at 105.92 against the dollar after seeing an earlier high of 105.71.
The Australian dollar changed hands at $0.6810 after touching an earlier low of $0.6776, as Reserve Bank of Australia governor Philip Lowe said Friday it was “reasonable to expect an extended period of low interest rates.” Lowe’s comments came on the back of a larger than expected rate cut by the Reserve Bank of New Zealand on Tuesday.
Oil prices were largely unchanged in the afternoon of Asian trading hours. The international benchmark Brent crude futures was just below the flatline at $57.37 per barrel while U.S. crude futures were flat at $52.54 per barrel.
— Reuters and CNBC’s Fred Imbert contributed to this report.


European stocks closed lower on Friday as investors monitored trade war developments and a possible collapse of the Italian government.

The pan-European Stoxx 600 was provisionally 0.9% lower at the closing bell, with most sectors and major bourses in the red.
Banking stocks shed 1.9%, dragged down by Italian lenders, while China-exposed basic resources and autos stocks led losses, with both sectors falling by more than 2.5%. Healthcare stocks bucked the trend, hovering just above the flatline.
Italy’s coalition government imploded on Thursday, as deputy prime minister and leader of Italy’s ruling Lega party, Matteo Salvini, declared the arrangement unworkable and called for fresh general elections.
Italy’s FTSE MIB index was 2.5% lower by the end of Friday’s session, as investors veered away from Italian assets amid the rising instability.
Italian bank stocks plunged, with Banco BPM shares tumbling 9%, while Unicredit and Ubi Banca fell by 5% and 8% respectively.
In the latest trade war developments, a majority of economists polled by Reuters said the recent escalation of tensions between the U.S. and China had brought forward the next U.S. recession, and indicated that the Federal Reserve is likely to cut rates again in September before a further cut next year.
Meanwhile, a Bloomberg report claimed Thursday that the U.S. is holding off on giving permission to U.S. companies to use Huawei products after China halted its buying of American agricultural produce.
Later, President Trump said the U.S. was not ready to do business with Huawei and he was not ready to do a trade deal with China.
China’s currency remains in focus as the People’s Bank of China (PBOC) again set the daily yuan midpoint weaker than the key barometer of 7 per dollar.
Stocks on Wall Street extended losses during Friday’s trading session, dragged down by chip stocks which fell on the back of Trump’s latest statement on China.
Back in Europe, official data showed that the British economy has shrunk for the first time since late 2012 after U.K. second quarter GDP (gross domestic product) contracted by 0.2%.
Sterling and the FTSE 100 were both trading lower on the news, with uncertainty increasing as British media speculated that a general election may be called in the U.K. by November.
Looking at individual stocks, London-listed WPP surged to the top of the Stoxx 600 after its earnings beat forecasts, with shares up more than 7%.
At the other end of the European benchmark were Italian lenders Ubi Banca and Banco BPM.

Stocks fell on Friday as Wall Street concluded a wild week amid trade war fears and worries over the global economy.
The Dow Jones Industrial Average closed 90.75 points lower, or 0.3% at 26,287.44. The S&P 500 dipped 0.7% to 2,918.65 while the Nasdaq Composite pulled back 1% to 7,959.14.
President Donald Trump told reporters on Friday the U.S. is not ready to strike a trade deal with China. “China wants to do something, but I’m not doing anything yet,” Trump said. “Twenty-five years of abuse. I’m not ready so fast.”
Chris Gaffney, president of world markets at TIAA Bank, said Trump is digging in on the U.S.-China trade war. “He believes the trade war impacts China much more than the U.S. In his mind, you can close up the U.S. economy,” he said. “At the same time, you’ve got China doing the same thing.”
“The reactions in the markets this week are maybe more of a realization that this trade war is not going to come to a quick end,” Gaffney said.
Drew Angerer | Getty Images News | Getty Images
Trump also said the U.S. will not do business with Huawei. However, stocks came off their lows after Fox Business reported the White House clarified Trump’s statements on Huawei, highlighting it is only the U.S. government that is not buying Huawei products. CNBC’s Ylan Mui confirmed the clarification.
Chipmakers Micron Technology and Skyworks Solutions both closed more than 2.5% lower.
This comes after China decided to stop buying American crops and after the U.S. officially declared China a currency manipulator earlier this week. The U.S. designation came after China let its currency, the yuan, fall to its lowest level in a decade relative to the dollar, sparking the biggest sell-off of 2019 for stocks.
“If there was any doubt, President Trump has clearly moved from trade wars to currency wars,” said Harvinder Kalirai, chief fixed income and FX strategist at Alpine Macro, in a note. He said the Federal Reserve will be pushed towards aggressive easing measures if President Donald Trump keeps pressuring China. “Investors should incorporate intrinsic hedges to ride out market volatility and protect themselves from policy errors.”
Stocks had a wild week, with the major indexes recording their biggest one-day sell-off of the year on Monday. The indexes recovered some of those losses on Tuesday. 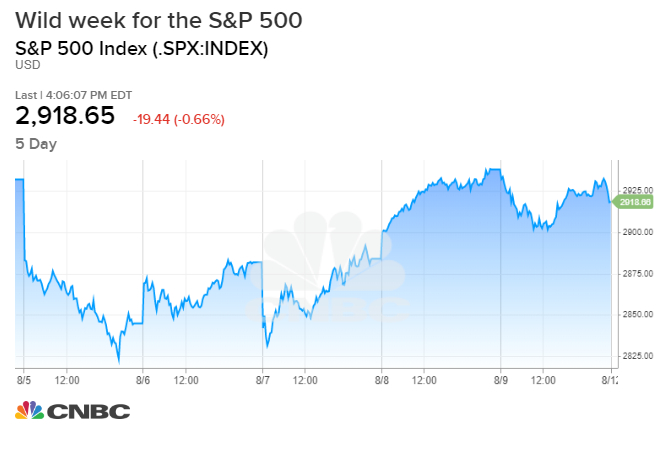 On Wednesday, stocks resumed their sell-off as investors loaded up on traditionally safer government bonds and gold before staging a sharp comeback. By Thursday’s close, the indexes had recovered most of their losses from Monday’s drop.
The Dow ended the week on Friday down 0.75%. The S&P 500 and Nasdaq lost 0.5% and 0.6%, respectively.
Traders also kept a close eye on the bond market, where the recent appetite for U.S. debt has pushed a bond market recession indicator close to a warning zone. If investors trigger a recession warning in the bond market that tends to be negative for stocks.
In Europe, bank stocks led markets lower Friday as Italian lenders tumbled on political uncertainty in the country. Italy’s coalition government imploded on Thursday evening, as deputy prime minister and leader of Italy’s ruling Lega party, Matteo Salvini, declared the arrangement unworkable and called for fresh general elections.
—CNBC’s Silvia Amaro contributed to this report.
Posted by Fernando Guzmán Cavero at August 11, 2019