Stocks rose on Thursday, erasing most of the steep losses from earlier in the week,  as global bond yields rebounded while investors digested better-than-expected trade data out of China.
The Dow Jones Industrial Average closed 375 points higher, or 1.4%. The S&P 500 advanced 1.9% while the Nasdaq Composite surged 2.2%.
Thursday’s gains helped the indexes recover most of the sharp losses from Monday’s session. The Dow and S&P 500 fell nearly 3% each on Monday while the Nasdaq dropped 3.5%. The indexes hit the week’s lows on Wednesday before staging a strong comeback.
Through Thursday afternoon, the Nasdaq and S&P 500 had eked out a small weekly gain. The Dow was only down 0.4%. 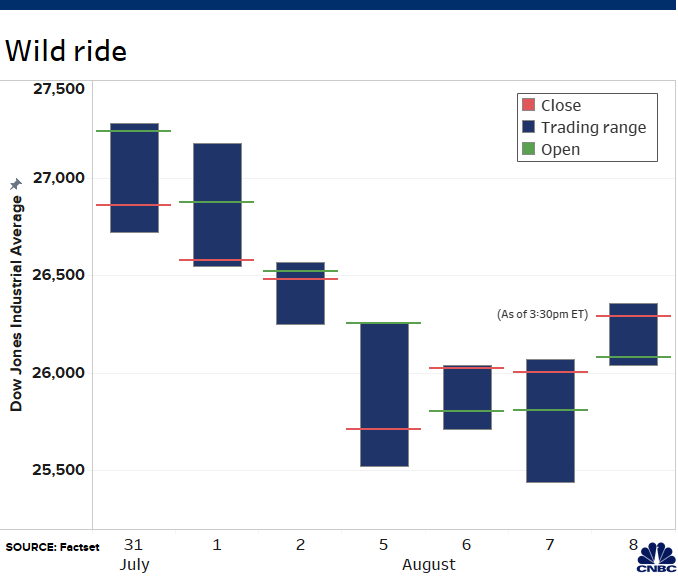 “This is pretty normal after market shocks,” said Keith Lerner, chief market strategist at SunTrust Private Wealth. “Normally, you have a sharp move down, catching people offsides. Then you get stretched to one side and there is this battle between fear and greed. You get some people thinking this is ‘the big one’ and they start selling. But then you get people coming in wanting to buy.”
Tech shares led the gains Thursday, with the sector rising about 2%. AMD was the best-performing stock in the sector, surging about 14% as investors cheered the release of a second-generation chip for data centers.
Disney shares also contributed to the gains, rising 1.8% after an analyst Credit Suisse upgraded the media giant to outperform from neutral. The analyst expects the company will have a successful launch of Disney+, the company’s streaming service.
The benchmark 10-year Treasury note yield traded at 1.71% after dropping below 1.6% in the previous session. In Germany, the 10-year bund yielded negative 0.5% after sliding to negative 0.6% — a record low — in the previous session.
The jump in global bond yields coincided with a Reuters report saying Germany is considering issuing new debt to finance a climate protection package. The report cited a German senior government official.
Yields plummeted around the world on Wednesday as investors piled into safer assets on worries over the global economy.
Tumbling yields can signal global growth concerns from investors and fuel sharp pullbacks in equity markets. An escalation in trade tensions between China and the United States has accentuated these fears in recent days. Wall Street saw a wild ride Wednesday when the S&P 500 logged its biggest intraday comeback of the year.
Traders work on the floor at the New York Stock Exchange.
Brendan McDermid | Reuters
A slew of rate cuts from central banks around the world fueled the worries over global growth. New Zealand, India and Thailand all cut interest rates, citing concerns over growth slowing down.
“The net result of all this has been a collapse in global rates both at the long end and short end of curves that far outstrips the deceleration in global activity,” said Michael Shaoul, CEO of Marketfield Asset Management, in a note. “We are far more used to seeing the reverse take place, with central banks historically slow to react to sharp deteriorations in corporate earnings and only stepping in once employment markets start to signal the impact on employment.”
“Instead central banks and fixed income markets appear to be trapped in a feedback cycle whereby lower yields signal looser polices and vice versa,” Shaoul said. “What this actually means for underlying economic activity is much harder to ascertain.”
Strong data out of China helped calm Wall Street down. China said exports rose 3.3% on a year-over-year basis in July. Economists polled by Reuters expected exports to fall by 2%.
The data helped Asian stocks rise overnight. The Shanghai Composite gained 0.9% while the Nikkei 225 climbed 0.4%.
Investors also monitored the yuan. China’s central bank set the official reference rate for the Chinese currency at 7.0039 yuan per dollar on Thursday — the weakest level since April 21, 2008. Although, the new rate was stronger than the market had feared, possibly helping sentiment.
China set the yuan’s midpoint above 7 per U.S. dollar earlier this week. That sparked the worst sell-off on Wall Street for 2019.
“This still is an environment in which the policy risks are really in the driver’s seat,” said Bill Northey, senior investment director at U.S. Bank Wealth Management. “You’ve got trade and tariffs and monetary policy and there seems to be a feedback loop and interplay associated with those two key factors.”
—CNBC’s Silvia Amaro contributed to this report.
Posted by Fernando Guzmán Cavero at August 08, 2019