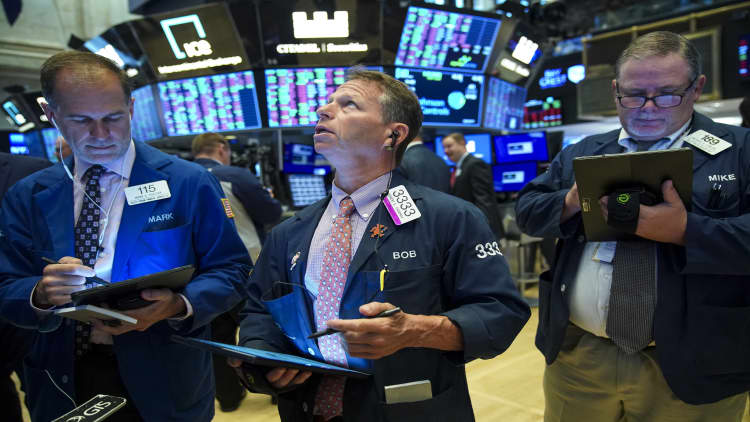 Stocks fell on Wednesday, giving back some of Tuesday’s solid gains, after the U.S. bond market flashed a troubling signal about the U.S. economy.
Futures on Dow Jones Industrial Average indicated a negative open of about 409 points. Futures on the S&P 500 and Nasdaq Composite were both lower, as well.
The yield on the benchmark 10-year Treasury note on Wednesday broke below the 2-year rate, an odd bond market phenomenon that has been a reliable indicator for economic recessions. Investors, worried about the state of the economy, rushed to long-term safe haven assets, pushing the yield on the benchmark 30-year Treasury bond to a new record low on Wednesday.
Bank stocks led the declines in the premarket as it gets tougher for the group to make a profit lending money in such an environment. Bank of America and Citigroup both fell more than 3% in premarket trading, while J.P. Morgan dropped 2.8%. The SPDR S&P Regional Banking ETF is down 2.65% in premarket. 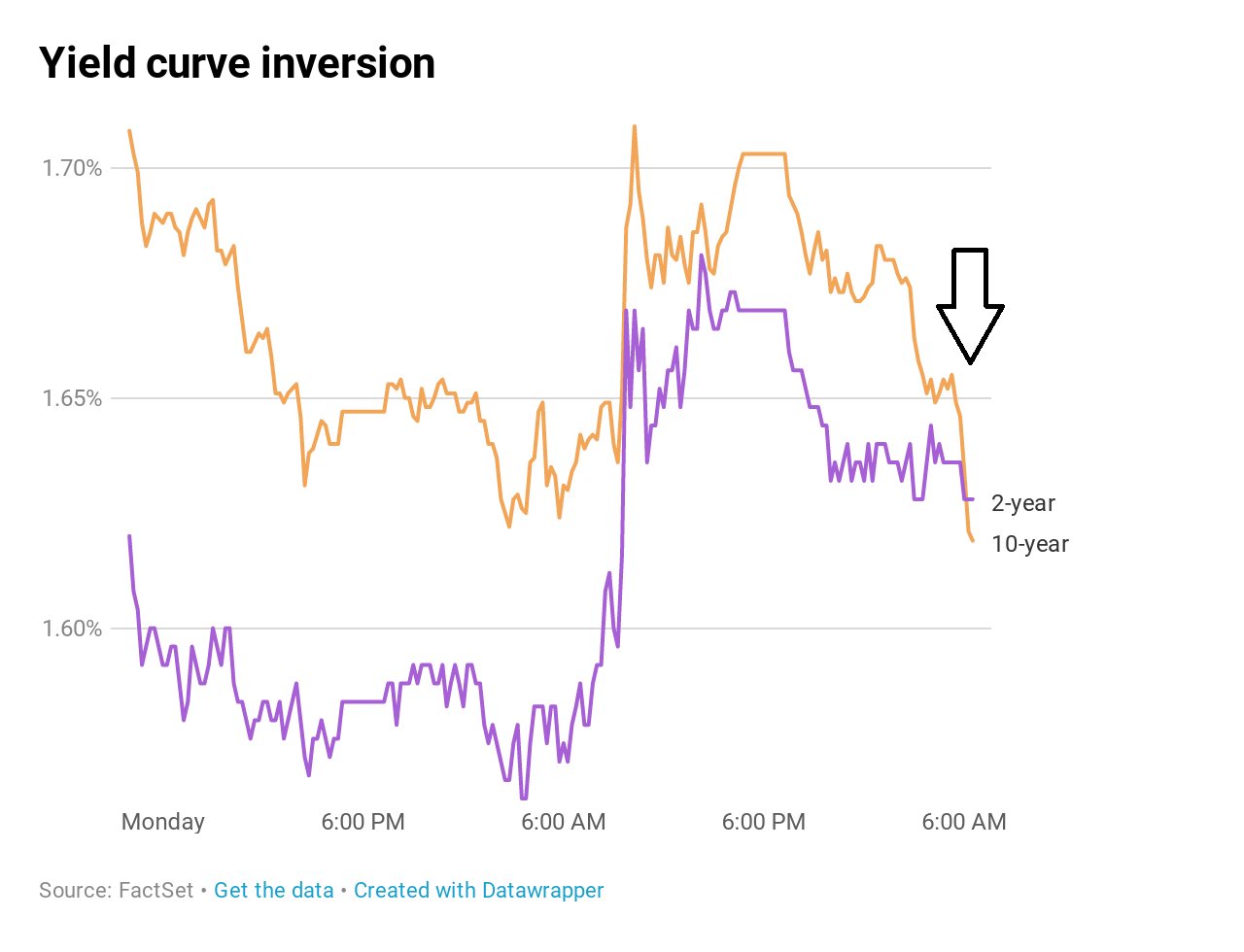 “The U.S. equity market is on borrowed time after the yield curve inverts,” wrote Bank of America technical strategist Stephen Suttmeier.
There have been five inversions of the 2-year and 10-year yields since 1978 and all were precursors to a recession, but there is a significant lag, according to data from Credit Suisse. A recession occurred, on average, 22 months after the inversion, Credit Suisse shows. And the S&P 500 actually enjoyed average returns of 15% 18 months after an inversion before it eventually turns.
The last time this key part of the yield curve inverted was in December 2005, two years before the recession hit.
“Historically speaking the inversion of that benchmark yield curve measure means that we now must expect a recession anywhere from six-to-18 months from today which will drastically, and negatively, shift our medium-to-longer term outlook on the broader markets,” Tom Essaye, founder of The Sevens Report, said in a note on Wednesday.
Shares of Macy’s tanked 16% in premarket after the retailer posted second-quarter earnings that are way below analysts’ expectations as heavy markdowns used in spring to clear unsold merchandise weighed on profits.

Investors also remained on edge about the U.S.-China trade war and its impact on the global economy as weaker-than-expected data in China deepened the gloom in the world’s second-largest economy. Official data published Wednesday showed growth of China’s industrial output slowed to 4.8% in July from a year earlier, marking the latest sign of faltering demand in the country.
The data came after the U.S. moved to delay tariffs on some Chinese imports in the previous session.
The United States Trade Representative announced Tuesday that certain products including clothing and cellphones were being removed from the tariff list based on “health, safety, national security and other factors” and will not face additional tariffs of 10%. Other tariffs will be delayed to Dec. 15 from Sep. 1 for certain articles, it said.
President Donald Trump said Tuesday that the move was designed to avoid any potential impact on holiday shopping ahead of Christmas season. He added China would very much like to make a trade deal.
Wall Street cheered the announcement, with the Dow jumping as much as 529 points before settling to finish the day 372 points higher.
China’s Commerce Ministry said Vice Premier Liu He had spoken by phone with U.S. Trade Representative Robert Lighthizer and Treasury Secretary Steven Mnuchin on Tuesday and they agreed to talk again in two weeks.
— CNBC’s Sam Meredith contributed reporting.
Posted by Fernando Guzmán Cavero at August 14, 2019