Foreign exchange currencies.
Getty Images
China let its yuan weaken below 7 to the dollar on Monday, an 11-year low, adding to broad risk aversion on concerns about the escalation of the U.S.-China trade war. 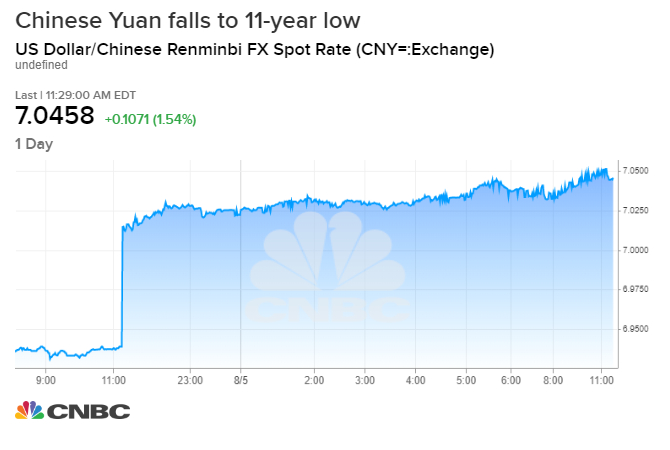 Investors dumped export-oriented Asian currencies and rushed into safe havens, with the Japanese yen surging to a seven-month high.
Chinese authorities, who had been expected to defend the psychologically important level , allowed the currency to drop to its lowest in the onshore market since the 2008 global financial crisis.
“We’ve had a pretty meaningful reaction, where 7 in particular was a level that the market was very sensitive to in dollar/CNY. Now that weve broken that, risk appetite has taken a hit,” said Brian Daingerfield, head of G10 FX strategy for the Americas at NatWest Markets in Connecticut. “I think there’s a sense that President Trump might try and escalate in terms of a reaction if he thinks that this was a deliberate move by the Chinese to try and weaken their currency artificially,” Daingerfield said.
Beijing on Friday vowed to fight back against U.S. President Donald Trump’s decision to impose 10% tariffs on $300 billion of Chinese imports, ending a month-long trade truce.
Trump on Monday called the Chinese currency move a major violation and currency manipulation.
The escalation of the trade dispute has increased speculation that the United States may act to weaken the greenback, though direct intervention is still viewed as unlikely.
Trump has aimed to weaken the dollar through comments on Twitter that include pressuring the Federal Reserve to cut rates. The greenback dropped 0.86% against the euro as Treasury yields fell and traders priced in more rate cuts this year.
“The whole trade war I think upset the apple cart. It does raise the recession risk,” said Win Thin, global head of currency strategy at Brown Brothers Harriman in New York.
Interest rate futures traders are pricing in a 100% chance of a rate cut at the Fed’s September meeting, with the odds of a 50 basis point rate cut jumping to 30% on Monday, from only 1.5% on Friday, according to the CME Group’s FedWatch tool.
Japan’s yen, which investors buy in times of risk aversion, rose to its highest since a January flash crash. The yen was last up 0.59% at 105.95. Japan’s top currency diplomat, Yoshiki Takeuchi, warned that Tokyo was ready to intervene if yen gains threatened its export-reliant economy.