Boris Johnson speaks after being announced as Britain’s next Prime Minister at The Queen Elizabeth II centre in London, Britain July 23, 2019.
Toby Melville | Reuters
Sterling fell 1% against the dollar Wednesday morning after U.K. Prime Minister Boris Johnson said he would schedule the formal reopening of parliament for October 14 — a highly-controversial move that would restrict parliamentary time before the Brexit deadline and increase the chances of the U.K. leaving the EU with no deal.
After initial media reports, Johnson confirmed Wednesday morning that parliament would be suspended days after Members of Parliament (MPs) return from their summer recess, and would return only for the queen to deliver a speech outlining the government’s post-Brexit plans on October 14.
This speech is the formal reopening of parliament and the October 14 date would mean that parliamentary business would be delayed, restricting time before the October 31 Brexit deadline.
Opposition parties on Tuesday signaled their intent to unite in creating a law to block Johnson from forcing a no-deal Brexit, which could damage Britain’s economy, according to several projections, and has faced widespread opposition in the House of Commons. Therefore, Johnson’s move Wednesday is seen as an attempt by the government to stifle the creation of this law and force through Brexit, one of the U.K. leader’s key promises upon taking power.
However, Johnson said Wednesday that lawmakers will still have ample time to debate Brexit and it was untrue that he was trying to sideline parliament on the issue.
The pound fell by 1% to below the $1.22 mark on Wednesday at 9:00 a.m. London time, but slightly pared losses to trade 0.6% down at $1.2211 by late morning. 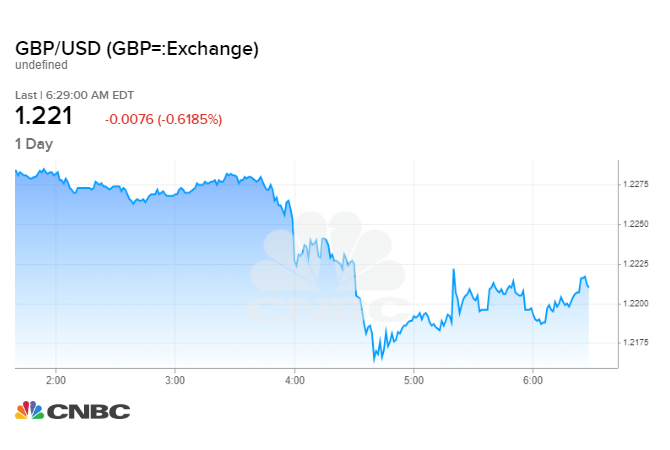 Parliament returns next week and will sit until September 9, at which point MPs would typically go on recess for three weeks during a season of political party conferences. Johnson’s move effectively extends the recess, through declaring a queen’s speech, to five weeks.
A queen’s speech, a norm when a new government takes power in Britain, also requires five days of debate afterwards. This makes it harder for MPs to use legislation as there would not be any room on the parliamentary schedule until this would complete.
Johnson is seeking to strike a renewed agreement with Brussels before the deadline, but the two sides have clashed over the Irish “backstop” issue, intended to maintain a seamless border on the island of Ireland.

Opposing party leaders and MPs have voiced widespread disapproval with the move.
Jeremy Corbyn, leader of the main opposition Labour party, said in a statement: “I am appalled at the recklessness of Johnson’s government, which talks about sovereignty and yet is seeking to suspend parliament to avoid scrutiny of its plans for a reckless No Deal Brexit. This is an outrage and a threat to our democracy.”
Corbyn added that if Johnson has confidence in his plans, he should “put them to the people in a general election or public vote.”
Scottish National Party leader and First Minister of Scotland, Nicola Sturgeon urged colleagues to try to thwart Johnson.
Tom Brake, Brexit spokesperson for the pro-EU Liberal Democrat party, called it a “declaration of war.”
Jordan Rochester, FX Strategist at Nomura, said in a note that while the suspension is not “as bad” as proroguing parliament completely, it has reduced the time MPs thought they had in October to block a no-deal exit.
“For GBP to recover the fall this morning rebel anti-no deal MPs will have to get their acts together in the first weeks of September. No more delaying,” the note added.
Rochester added that the fall in GBP is unlikely to extend into a new trend as “parliament is not completely prorogued just has to bring forward their plans to stop a no deal to next week,” and said the market is already betting heavily against the currency.
Chris Whitehouse, chairman and managing director of political communications firm Whitehouse Consulting, told CNBC via phone Wednesday that opposing politicians were “posturing,” adding that scheduling a queen’s speech was routine for a new government.
“Boris Johnson had no control whatsoever over the timing of Theresa May’s resignation and the election of himself as the Conservative party leader, and the decision of Her Majesty to ask him to form a government,” he said.
“It is, however, incumbent upon him to set out Her Majesty’s government’s plans for his term as Prime Minister, and to do so as promptly as reasonably possible after taking that position, and that is precisely what he is doing — no more, no less.”
at August 28, 2019