German Chancellor Angela Merkel speaks at the 100-years anniversary celebration of prosthesis maker Ottobock SE in Duderstadt, Germany, February 18, 2019.
Ralph Orlowski | Reuters
Sterling hit a three-week high against the dollar Thursday after German Chancellor Angela Merkel said a solution to the Irish “backstop” is possible before the October 31 Brexit deadline.
“I said that what one can achieve in three or two years can also be achieved in 30 days. Better said, one must say that one can also achieve it by October 31,” Merkel told a news conference in the Hague.
Her comments build on a speech Wednesday alongside U.K. Prime Minister Boris Johnson when she suggested that both sides could find a solution to the Irish backstop in the next 30 days. This was seen as signal that she was willing to compromise with Johnson and the extended deadline from her comments on Thursday gave sterling a boost.
“It is not about 30 days. The 30 days were meant as an example to highlight the fact that we need to achieve it in a short time because Britain had said they want to leave the European Union on October 31,” she added, according to a translation for Reuters.
Sterling jumped past $1.22 to trade 0.75% higher for the session by 2:00 p.m. London time. Meanwhile, London’s FTSE fell, trading 0.5% lower. Sterling is down more than 5% since the start of the year and down more than 14% since the U.K. voted to leave the European Union in 2016. 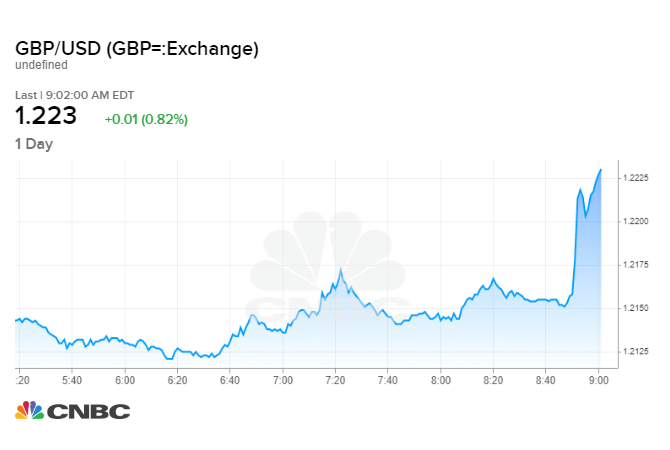 The Irish backstop — the most controversial part of the existing Brexit deal — is to do with maintaining a seamless border on the island of Ireland. It’s seen as a way to keep the porous border between the Republic of Ireland and Northern Ireland (which is a part of the U.K.) open in the event that the U.K. and EU fail to agree a future trade deal at the end of a 21-month transition period.
Its unpopularity with pro-Brexit lawmakers stems from its requirement that the U.K. remains in a single customs territory with the EU for an indefinite amount of time.
New U.K. leader Johnson is fighting hard to drop this part from the Withdrawal Agreement and has warned his EU counterparts that Britain could leave without a deal in place if nothing is agreed before the October 31 deadline. Sterling has slipped in recent months on the prospect of this no-deal scenario.
Stephen Gallo, a forex strategist at BMO Capital Markets, told CNBC that currency traders have been betting heavily against the pound recently and Merkel’s comments hint at an attempt to compromise.
“Is Brussels about to ‘blink’? GBP shorts are not waiting around to find out,” he told CNBC via email. In the medium term, he says the picture hasn’t changed, however.
“We still think the odds of a WTO Brexit are elevated, and in any case, there could well be a snap election in the U.K. before October 31st. We would still be selling rallies in GBPUSD,” he said.
—Reuters and CNBC’s Elliot Smith contributed to this article.
at August 22, 2019