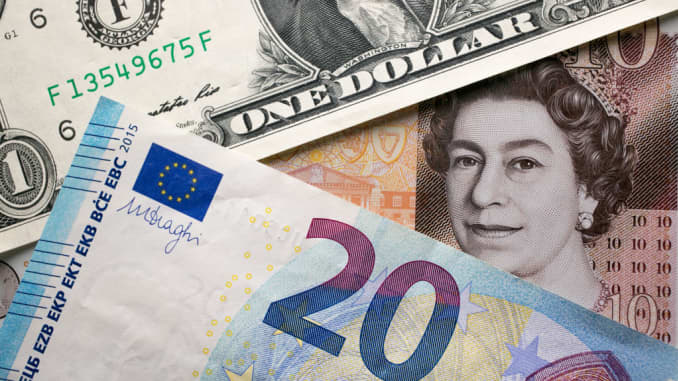 U.S. dollar, British pound and euro notes.
Matt Cardy | Getty Images
The dollar rose against the safe-haven yen and Swiss Franc on Wednesday, as risk appetite further improved with global stocks and U.S. yields higher ahead of an annual Federal Reserve gathering later this week in Jackson Hole, Wyoming and a summit of major central banks this weekend.
Market participants are waiting for any statement from the Fed and other global monetary authorities meeting at a Group of Seven summit this weekend on possible measures to lift slumping economies around the world.
Fed Chairman Jerome Powell’s highly-anticipated speech in Jackson Hole on Friday comes after last week’s inversion of the U.S. yield curve - widely regarded as a recession signal. The curve inversion has boosted expectations of another interest rate cut at its September policy meeting.
The interest rate futures market has priced in 100 basis points of easing over the next year. Despite market expectations of a major speech from Powell, Ranko Berich, head of market analysis, at Monex Europe in London believes the Fed chief is unlikely to make any big pronouncement in Jackson Hole.
“At the moment, the Federal Reserve is hyper-conscious of the fact that the president of the United States is doing everything in his power to politicize monetary policy-making,” said Berich. “What we’re seeing from Powell’s policies is to push from that politicizing very strongly, so a big pontification speech at Jackson Hole is the complete opposite of what he’s trying to achieve at the moment,” he added.
Instead, Berich thinks Powell will reiterate his past comments that the U.S. economy is strong, the Fed is easing out of an abundance of caution, and he doesn’t see any upside risks to inflation.
In morning trading, the dollar rose 0.2% against the yen to 106.43 yen, gaining in four of the last five sessions.
Against the Swiss franc, the dollar climbed 0.3% to 0.9808 franc.
The dollar has also been supported by talk of more spending. U.S. President Donald Trump said on Tuesday his administration was considering potential tax cuts on wages as well as profits from asset sales. The Fed minutes of the last monetary policy meeting are also due out later on Wednesday, although that is being overshadowed by the Jackson Hole meeting later this week.
The euro, meanwhile, was slightly lower at $1.1096, moving little since Italy’s Prime Minister Giuseppe Conte resigned on Tuesday.
Some investors believed the move made a snap general election less likely. Credit Agricole strategist Manuel Oliveri expects the euro to strengthen towards $1.12 by September even though the European Central Bank will struggle to exceed investor expectations for cutting rates. Talk of more fiscal spending in Germany and the hit to the U.S. yield advantage from falling interest rates, should support the euro, he added.
at August 21, 2019

News | Business | Economy | US: U.S. economy plunges 31.4% in the second quarter but a big rebound is expected