Crude oil plunged on concerns the global economy would weaken further after President Donald Trump ended a tariff ceasefire with China. The president said additional tariffs of 10% on the remaining $300 billion in Chinese goods would be added in September.
Futures for WTI crude dropped 7.9% to $53.95. WTI broke a 5-day winning streak with its worst daily performance in more than 4 years.
“The oil market has been the highest hit asset around from the trade war and this only exacerbates the situation,” said John Kilduff Founding Partner of Again Capital.
“It was a rough day for oil even before the tweet came out,” said Kilduff. “The oil markets didn’t get help from the stance the Federal Reserve took yesterday and then got hurt by the president’s announcement.” 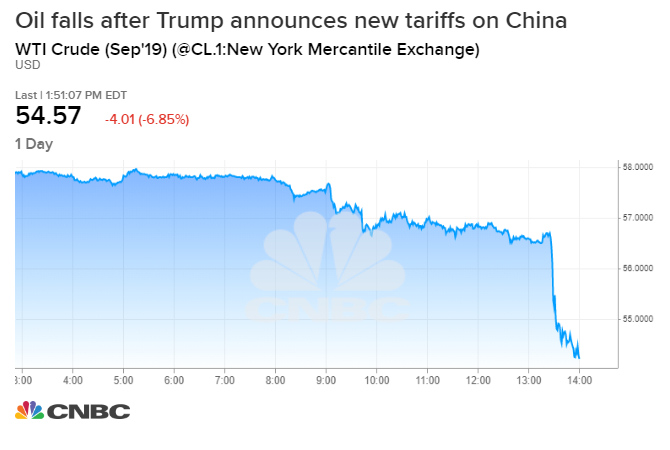 Brent crude, the international benchmark, also fell more than 6% to $60.67 following Trump’s tweets. Brent had its worst day since February 2016.
“Trade talks are continuing, and during the talks the U.S. will start, on September 1st, putting a small additional Tariff of 10% on the remaining 300 Billion Dollars of goods and products coming from China into our Country...We look forward to continuing our positive dialogue with China on a comprehensive Trade Deal, and feel that the future between our two countries will be a very bright one!” Trump said in a tweet on Thursday.
Although the trade war with China has been going on for over a year, in May, President Trump hiked tariffs to 25% from 10% on $250 billion in Chinese goods. China immediately retaliated with tariffs on U.S. goods.
Trade talks resumed this week in Shanghai and although the White House called the talks “constructive” Trump said “sadly, China decided to re-negotiate the deal prior to signing” which caused him to impose new tariffs.
Earlier on Thursday, oil was down because the Federal Reserve dampened hopes for a string of interest rate cuts. The Fed lowered interest rates 25 basis points on Wednesday but did not signal it was entering a deep easing cycle.