Stocks soared on Tuesday after the U.S. decided to delay tariffs on certain Chinese goods while outright removing some items from the tariff list, reigniting hopes Washington and Beijing could reach a long-term resolution.
The adjusted policy on tariffs caused the Dow Jones Industrial Average to jump about 382 points, on pace for its best day in more than two months. The S&P 500 rose 1.5% and the Nasdaq Composite was 2.2% higher, led by Apple which surged more than 4%.
The United States Trade Representative announced Tuesday certain products including clothing and cellphones are being removed from the tariff list based on “health, safety, national security and other factors” and will not face additional tariffs of 10%. Other tariffs will be delayed to Dec. 15 from Sep. 1 for certain articles, it said. 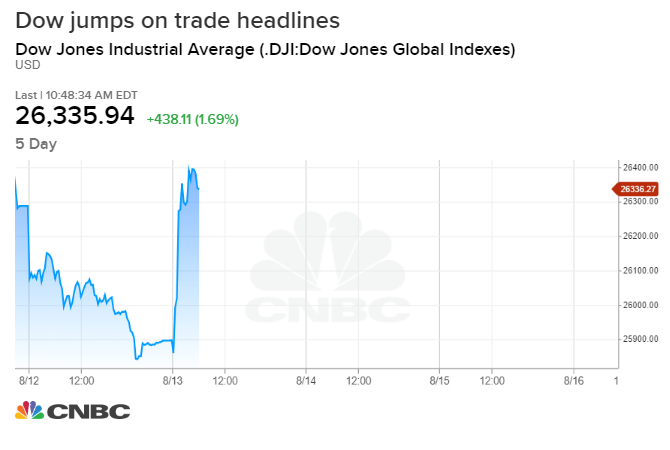 “Products in this group include, for example, cell phones, laptop computers, video game consoles, certain toys, computer monitors, and certain items of footwear and clothing,” the statement from the USTR said.
Retailers cheered the potential delayed rise in costs for apparel and electronics. Best Buy soared more than 6%, while Nike jumped 2%. Nordstrom also rose 2%. The SPDR S&P Retail ETF is up more than 4%, on pace for its best day of the year.
President Donald Trump said Tuesday he delayed the tariffs ahead of Christmas season to avoid potential impact on holiday shopping. He added China would very much like to make a trade deal.
“While the U.S.-China developments this morning are positive, keep in mind that even if the 9/1 tariffs are completely abandoned, the S&P 500 will still struggle to get above 3,000,” Adam Crisafulli, a J.P. Morgan managing director, said in a note on Tuesday. “The next big steps on the U.S.-China relationship front concerns Huawei and agriculture.”
Trump abruptly ended the cease-fire with China on Aug. 1 by threatening to impose additional tariffs on Chinese imports that eluded duties in the earlier round in May. Stocks suffered their worst days of the year on Aug. 5 after China allowed its currency to drop against the dollar below a key level unseen since 2008. 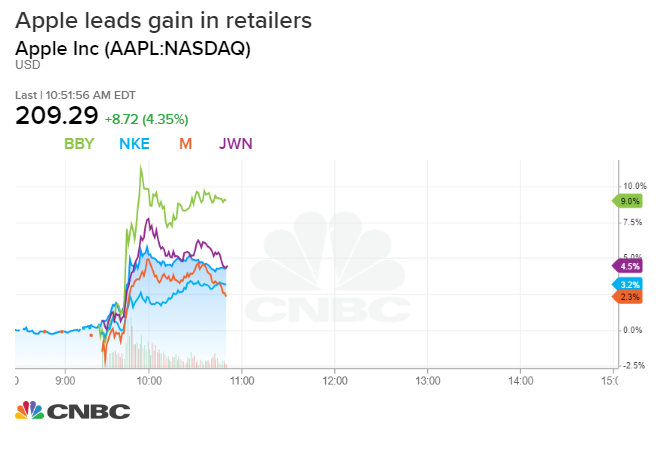 Trade negotiators from the U.S. and China held phone conversations on Tuesday and agreed to discuss again in two weeks, China state-run media Xinhua reported Tuesday.
Stocks were lower before the USTR announcement as the bond market raised red flags, fueling concerns the global economic slowdown could tip us into a recession. The widely watched 2-year to 10-year yield spread is now just 3 basis points, according to FactSet. A yield-curve inversion has been a reliable recession indicator watched by the Federal Reserve as well as many market experts.
The Labor Department’s consumer price index report showed inflation came in as expected last month. The yield curve continued to narrow after the report.
The Dow slumped nearly 408 points on Monday to fall back below 26,000, while the benchmark 10-year Treasury yield dipped to 1.63%.
Despite concerns about the yield-curve inversion, history shows stocks have another 18 months to run typically before doom hits, based on data going back to 1978, according to Credit Suisse. Data show a recession comes in about 22 months on average after the curve inverts.
“I think there’s a lot of fear embedded in the bond market,” said Jim Paulsen, chief investment strategist at The Leuthold Group. The inverted yield curve “is the biggest risk right now. It’s my number one worry but I think it’s overdone. If economic reports continue to improve, then I think people will decide this doesn’t look like a recession.”
“The fact that we have negative yields around the world makes this somewhat a different signal. The fact we inverted on underheat rather than the normal inversion on overheat makes it somewhat different,” Paulsen added.
The increasingly violent protests in Hong Kong and a crash in the Argentine peso also drove investors to perceived “safe haven” assets such as U.S. bonds, gold, and the Japanese yen.
China once again fixed its yuan midpoint at 7.0326 per dollar on Tuesday, the fourth consecutive session where the People’s Bank of China set the figure at a level weaker than the psychologically 7-yuan-per-dollar level.
— CNBC’s Sam Meredith contributed reporting.
Posted by Fernando Guzmán Cavero at August 13, 2019