Dow I U.S. Future Market Indicator: Dow futures jump more than 200 points as Trump says US and China are 'getting back to the table'

Traders work on the floor of the New York Stock Exchange.
Brendan McDermid | Reuters
U.S. stock futures surged Monday morning after President Trump said China is ready to come back to the negotiating table following a phone call Sunday and the two countries will start talking very seriously.
Dow Jones Industrial Average futures traded 229 points higher, indicating a rise of 283.10 points at Monday’s open, as of 4:55 a.m. ET Monday. S&P 500 and Nasdaq 100 futures also pointed to opening gains for both indexes.
Speaking to reporters at the Group of Seven (G-7) meeting in Biarritz in France Monday, Trump said the two countries would start talking very seriously.
“China called last night our top trade people and said ‘let’s get back to the table’ so we will be getting back to the table and I think they want to do something. They have been hurt very badly but they understand this is the right thing to do and I have great respect for it. This is a very positive development for the world,” Trump said.
Futures had indicated declines after the weekend saw an escalation of the trade war. Trump tweeted Friday after the market close that the U.S. will raise tariffs on $250 billion worth of Chinese goods to 30% from 25%. Tariffs on another $300 billion in Chinese products will also go up to 15% from 10%, he said. The levies on the $250 billion worth of goods are scheduled to kick in Oct. 1, while the duties on the $300 billion are set to go into effect in two stages on Sept. 1 and Dec. 15.
“Sadly, past Administrations have allowed China to get so far ahead of Fair and Balanced Trade that it has become a great burden to the American Taxpayer,” Trump said in his tweets. “As President, I can no longer allow this to happen!”
Trump later said at the G-7 summit in in Biarritz, France he regrets not raising tariffs on China even more, noting he has “second thoughts about everything.” The president added he could declare the trade war a national emergency.
Trump’s comments and tweets came after China unveiled new tariffs Friday on $75 billion worth of U.S. products, including autos. Trump had also ordered on Friday that U.S. companies move their Chinese operations elsewhere, sending U.S. stocks tumbling.
The major indexes all fell more than 2% on Friday, with the Dow Jones Industrial Average losing 623.34 points. Those declines wiped out the weekly gains the averages had built through Thursday’s close. After Friday’s session, the Dow ended down 1% for the week, while the S&P 500 and Nasdaq Composite concluded the week down 1.4% and 1.8%, respectively. Last week also marked the indexes’ fourth straight weekly loss, their longest since May. 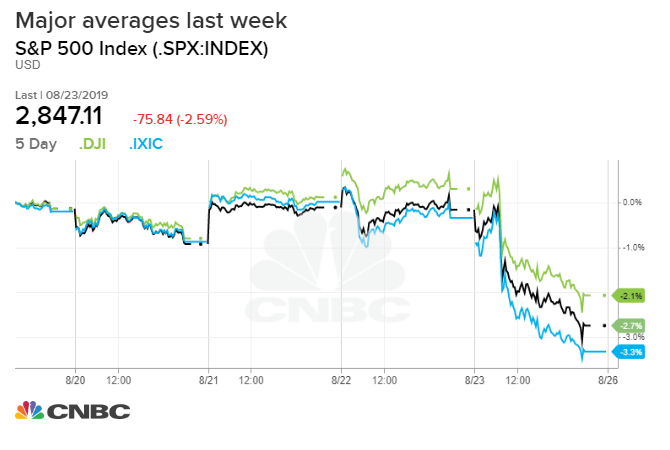 China and the U.S. have been engaged in a trade war since last year. The economic conflict has dampened economic and corporate earnings growth expectations as investors and companies weigh its impact on the global economy. The U.S. and China are the world’s largest economies.
“The ongoing Trade War is redrawing global supply chains, claiming casualties in the process,” Julian Emanuel, chief equity and derivatives strategist at BTIG, said in a note. “As persistent headwinds intersect with traditional seasonal softness, recent volatility can be expected to continue in the near term as markets await policy developments.”
The trade war is taking place against a backdrop of softening economic growth. Germany’s manufacturing sector is contracting while China’s economy grew at its slowest pace in nearly three decades in the second quarter.
The U.S. bond market has also flashed a recession signal recently. The 10-year Treasury yield has dipped below its 2-year counterpart. This phenomenon is known as a yield-curve inversion. Experts fear it because it has historically preceded recessionary periods.
This economic soft patch has led central banks to ease monetary conditions, including the Federal Reserve.
Fed Chairman Jerome Powell said Friday the central bank will “act as appropriate” to sustain the current U.S. economic expansion, which is the longest in history. However, Powell failed to clearly signal that another rate cut was imminent in September.
“The problem facing stocks isn’t restrictive monetary policy but instead Trump’s destructive trade policy,” Adam Crisafulli, executive director at J.P. Morgan, said in a note Sunday. “Rates are already very low and low yields coupled with inverted curves are becoming counterproductive for stocks – as a result, central banks are doing about all they can right now.”
Last month, the Fed cut rates by 25 basis points. Market expectations for a September rate cut are also at 100%, according to the CME Group’s FedWatch tool.
—CNBC’s Eustance Huang, Michael Bloom and Chris Hayes contributed to this report.
Subscribe to CNBC on YouTube.
at August 26, 2019