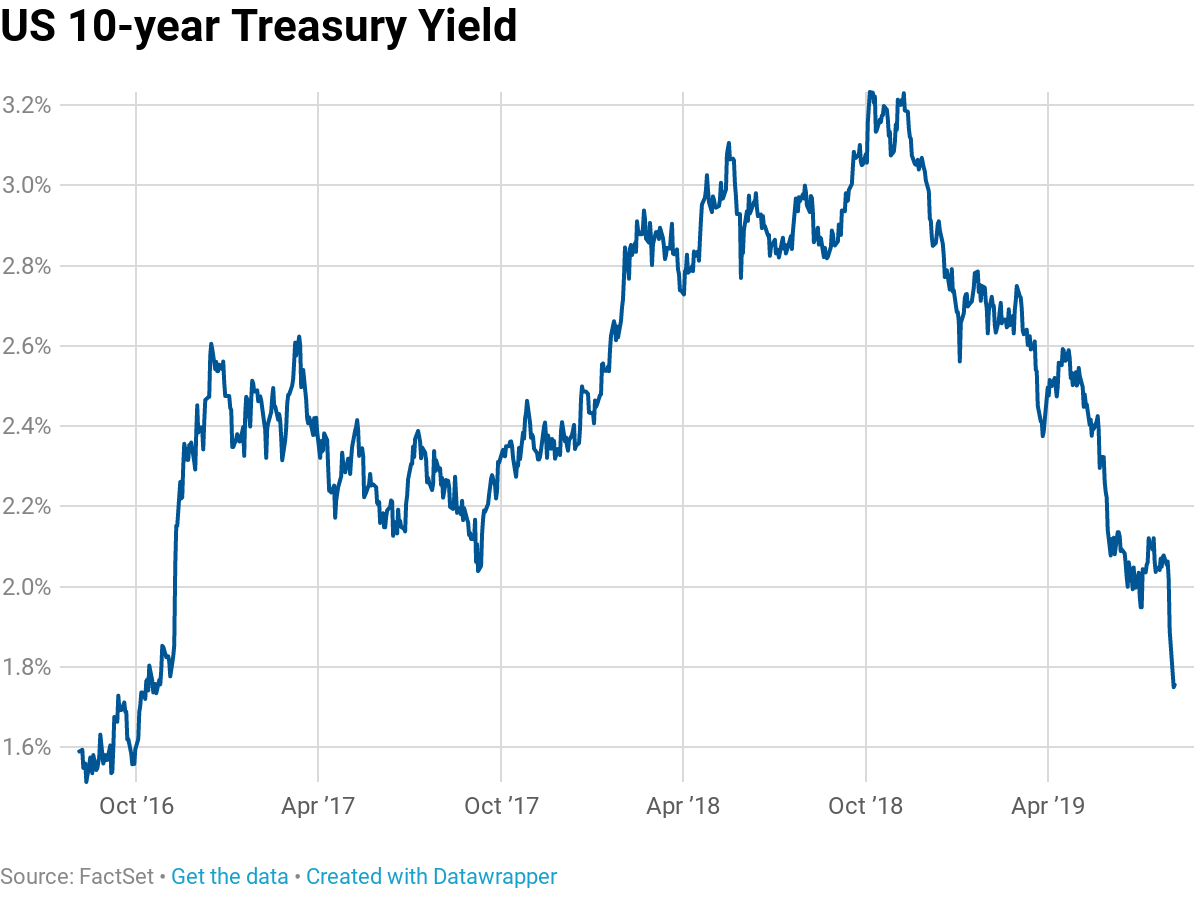 The yield on the benchmark 10-year Treasury note held steady Tuesday morning after breaking under 1.7% earlier in the session for the first time since the fall of 2016.
At around 3:58 p.m. ET, the yield on the benchmark 10-year Treasury note was slightly lower at 1.716%, off a low of 1.672% hit in overnight trading. The yield on the 30-year Treasury bond was also slightly lower at 2.246%.
The uptick in yields came after China’s central bank indicated that it wants the country’s currency to strengthen against the U.S. dollar. Overnight, the People’s Bank of China set the midpoint for the yuan at a level stronger than the key 7 yuan-to-dollar rate. The yuan breached that level for the first time since 2008 on Monday.
Investors took the announcement from the PBOC as welcome relief from the prior session’s fears that China wouldn’t support the yuan against the greenback in a burgeoning currency war. Many thought the yuan’s depreciation could be an attempt by Beijing to juice its exports and aggravate the trade war between the globe’s two largest economies.
Those anxieties sent the Dow Jones Industrial Average tumbling more than 750 points on Monday as all three of Wall Street’s notched their worst day of the year. The stock onslaught fostered a bid for less risky assets like U.S. debt as yields on maturities across the board sank to multiyear lows.
The angst showed no signs of slowing late Monday after the U.S. Treasury officially designated China as a “currency manipulator, ” following a sharp fall in the value of the Chinese yuan against the dollar.
A protracted trade dispute between the U.S. and China has now dragged on for more than a year. Both countries have slapped additional tariffs on each other’s goods worth billions of dollars, and the escalating tensions have spooked markets and hurt global economic growth outlook.
Late last week, China vowed to retaliate after President Donald Trump threatened to impose a 10% tariff on $300 billion worth of Chinese imports.