Stocks in Asia mostly slipped on Monday as investors awaited the resumption of U.S.-China negotiations in Beijing this week amid low expectations for a major breakthrough.
Shares in mainland China were mixed on the day, the Shanghai composite slipped 0.12% to 2,941.01, while the Shenzhen component and Shenzhen composite were fractionally higher at 9,354.28 and 1,574.95 respectively.
Hong Kong’s Hang Seng index dropped 1.16%, as of its final hour of trading, as tensions remain high in the city following another clash between protestors and the police over the weekend. Shares of life insurer AIA declined 2.02%.
“Hong Kong I think, in a business sense, is suffering from this sort of situation,” Richard Harris, chief executive at Port Shelter Investment Management, told CNBC’s “Squawk Box” on Monday.
“That’s likely to help Singapore and it’s probably likely to help the banks especially because it’s so easy to move money, cash money, from one jurisdiction to another,” Harris said.
Over in South Korea, the Kospi dropped 1.78% to finish its trading day at 2,029.48 — lower than its final close of 2018 — as shares of chipmaker SK Hynix plunged 3.51%.
The Nikkei 225 in Japan declined 0.19% on the day to 21,616.80, as index heavyweight and robot maker Fanuc’s stock fell 1.63%. The Topix also closed 0.19% to 1,568.57.
Shares of conglomerate Softbank Group soared 3.88% after the company’s Founder and Chief Executive Masayoshi Son told the Nikkei in an interview that he expects initial public offerings of portfolio companies in its Vision Fund “almost every month” by around next year.
Son also said Monday that Softbank will invest $2 billion in Southeast Asian ride hailing giant Grab, according to a Reuters report.
Australia’s S&P/ASX 200, on the other hand, rose 0.48% to close at 6,825.80.
Overall, the MSCI Asia ex-Japan index was 0.54% lower.
Meanwhile, Singapore’s DBS Group on Monday, ahead of the market open, posted a 17% increase in second-quarter profit, which came in at $1.6 billion ($1.2 billion) versus $1.37 billion a year earlier, beating estimates. The stock was 0.82% lower in afternoon trade.
U.S.-China trade talks are also set to resume this week, with a trade delegation from Washington scheduled to fly to China on Monday for negotiations with Beijing officials. Expectations for a major breakthrough are low, however, with National Economic Council Director Larry Kudlow telling CNBC last Friday that he “wouldn’t expect any grand deal. ”

Last Friday, strong earnings and better-than-expected GDP data pushed the S&P 500 and Nasdaq Composite to record highs. The S&P 500 gained 0.7% to close at 3,025.86, while the Nasdaq Composite rose 1.1% to finish its trading day at 8,330.21. The Dow Jones Industrial Average also closed 51.47 points higher at 27,192.45.
More than 40% of S&P 500 companies have reported quarterly earnings for the second quarter. Of those companies, 76.4% have posted a stronger-than-forecast profit, according to FactSet. The U.S. economy also expanded more than expected in the second quarter, growing 2.1% as compared to expectations of a 1.8% rise by economists surveyed in CNBC/Moody’s Analytics Rapid Update.
Meanwhile, Chinese industrial profits fell in June, according the the country’s National Bureau of Statistics on Saturday. Industrial profits fell 3.1% in June from a year earlier, following a 1.1% gain in May.
“The slowdown in profits lines up with the soft producer prices seen earlier in the month and also suggests margins are being impacted by the US-China trade war,” Tapas Strickland, an economist at National Australia Bank, wrote in a morning note.
The U.S. dollar index, which tracks the greenback against a basket of its peers, was at 98.053 after rising from levels below 97.2 last week.
The Japanese yen traded at 108.62 against the dollar after weakening from levels below 108 in the previous trading week, while the Australian dollar changed hands at $0.6908 after slipping from levels above $0.702 last week.
Oil prices declined in the afternoon of Asian trading hours, as international benchmark Brent crude futures slipped 0.6% to $63.08 per barrel and U.S. crude futures declined 0.39% to $55.98 per barrel.
— Reuters and CNBC’s Fred Imbert contributed to this report.

European stocks closed higher on Monday afternoon as U.S. and Chinese trade negotiators prepare to meet in Shanghai for the first in-person trade talks since a truce was agreed in June.
The pan-European Stoxx 600 restored early gains to close  0.14% higher as markets reacted positively to a series of potential mergers and earnings. Telecoms and financial services stocks closed with 1.5% and 1.7% climbs respectively, while autos struggled to make headway, falling 0.9%.

Expectations for progress during the impending two-day meeting in Shanghai are low, and White House economic advisor Larry Kudlow told CNBC on Friday that negotiators would “hopefully go back to where the talks left off last May.”
Investors will also be awaiting the U.S. Federal Reserve’s monetary policy meeting this week, with the Fed widely expected to cut interest rates by 25 basis points.
New British Prime Minister and Conservative Party leader Boris Johnson plans to visit Scotland on Monday after the head of the Scottish Conservatives said that she would refuse to support the U.K. leaving the European Union without a deal. The Confederation of British Industry (CBI) also said on Sunday that the EU was lagging behind Britain in its preparation for a no-deal Brexit.
In corporate news, mergers and acquisitions are high on the agenda. Reuters reported on Sunday that U.S. buyout fund Blackstone Group is expected to announce the merger of its majority-owned financial data firm Refinitiv with the London Stock Exchange Group this week. The merger is expected to face a long antitrust review before it can be signed off. LSE Group stock climbed 15%.
The Financial Times has also reported a potential tie-up between food delivery companies Just Eat and Takeaway.com to form a £9 billion ($10 billion) group which would outsize both Uber Eats and Deliveroo. Just Eat’s stock surged 27% by mid-afternoon, also boosting peers such as Delivery Hero, which rose 5.3%.
As earnings season rumbles on, Ryanair on Monday reported a 21% fall in first-quarter net profit due to lower fares and higher costs, but reiterated its full-year guidance. Its first-quarter profit came in slightly ahead of analyst forecasts, but the company’s stock erased early gains to fall 0.3% during the afternoon session.
Heineken half-year profit missed expectations on higher costs, with the Dutch drinks company reporting a net profit of 1.05 billion euros, causing its share price to slide 6.2%.
Spain’s Bankia saw its second-quarter net profit fall 32% due to lower trading income, causing its stock to fall 2% by mid-afternoon.


U.S. stocks traded flat Monday as Wall Street tempered its expectations for this week’s trade negotiations between Washington and Beijing and prepared for the latest monetary policy decision from the Federal Reserve.
Around 3:12 p.m. ET, the Dow Jones Industrial Average rose 33 points — about 0.1% — as gains in Apple and 3M offset declines in Goldman Sachs and Boeing. The S&P 500 fell 0.18% as consumer discretionary and communication services stocks weighed on the broad equity index.
The tech-heavy Nasdaq Composite, meanwhile, dropped 0.5% as Amazon fell 1.6%, Microsoft lost 0.2% and Facebook shed 1.8%.
The Fed will announce its latest decision on whether to adjust interest rates at 2 p.m. ET Wednesday; Chairman Jerome Powell will also address the state of the economy in a press conference at 2:30 p.m. ET later Wednesday.
Despite a healthy economy and an unemployment rate under 4%, investors widely expect the central bank to cut its benchmark lending rate for the first time since 2008 by 25 basis points. The Fed, which seeks to keep inflation around 2%, has had trouble sustaining price growth in recent months despite a healthy economy and low unemployment.
That may hint that the current level of interest rates may be too high even though the benchmark is well below historical norms. Some economists and Fed officials think that rates need to be lowered in the face of decelerating GDP in the U.S. and a gloomier growth outlook overseas as Washington-led trade wars continue. 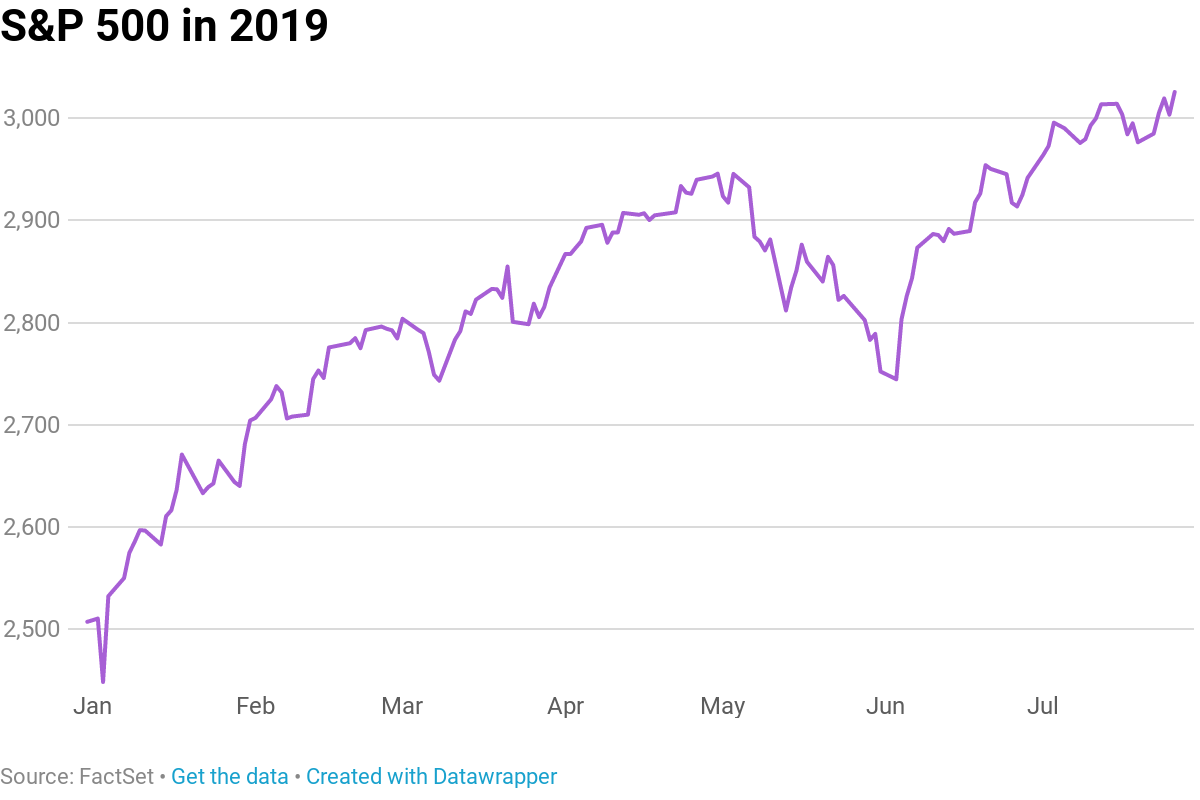 Investors are also likely to closely monitor whether the central bank will signal more cuts over the coming months. Economists mostly anticipate anywhere from one to three rate cuts this year.
President Donald Trump on Monday took to Twitter to jab the Fed ahead of its July meeting, criticizing the central bank for what he characterized as oppressive interest rates.
“The E.U. and China will further lower interest rates and pump money into their systems, making it much easier for their manufacturers to sell product,” the president said on Twitter. “In the meantime, and with very low inflation, our Fed does nothing - and probably will do very little by comparison. Too bad!”
U.S. and Chinese officials will convene in Shanghai this week in a latest attempt by the globe’s two largest economies to craft a trade deal and end their year-long trade dispute. While investors last week heralded news of the face-to-face discussion with optimism, people close to the talks warned that the appetite for a sweeping deal have waned since the spring.
“The S&P 500 remains the pied piper for global risk markets yet it continues to struggle with current levels for the third time in the past 18 months,” Michael Wilson, chief equity strategist at Morgan Stanley, wrote in a note to clients. “We think this latest surge will fail again, as we don’t expect a Fed cut to rekindle growth the way market participants may be hoping, and now pricing.”
“Thanks to the growth slowdown and the Fed’s pivot, interest rates have fallen a long way since then. This has made US stocks more attractive on valuation, but the fundamentals are no longer strong,” he added.
Those familiar with the talks told the Wall Street Journal that major breakthroughs are unlikely on issues that led to a breakdown in talks in early May but that more modest goals could be within reach. American and Chinese officials have struggled to reach a compromise over the protection of intellectual property and Beijing’s subsidization of businesses.
In corporate news, drugmaker Pfizer plans to divest its off-patent drug business and marry it with generic-drug maker Mylan. The combined company, which will market Mylan’s EpiPen and Pfizer’s Viagra, will be domiciled in the U.S.
Pfizer fell 3.7% in afternoon trading Monday while Mylan rose 13%.
Beyond Meat, the hot meat alternative IPO with a market cap bigger than a quarter of companies in the S&P 500, reports earnings after the bell. Seventy-five percent of companies have beaten estimates so far and 60% beat revenue expectations.