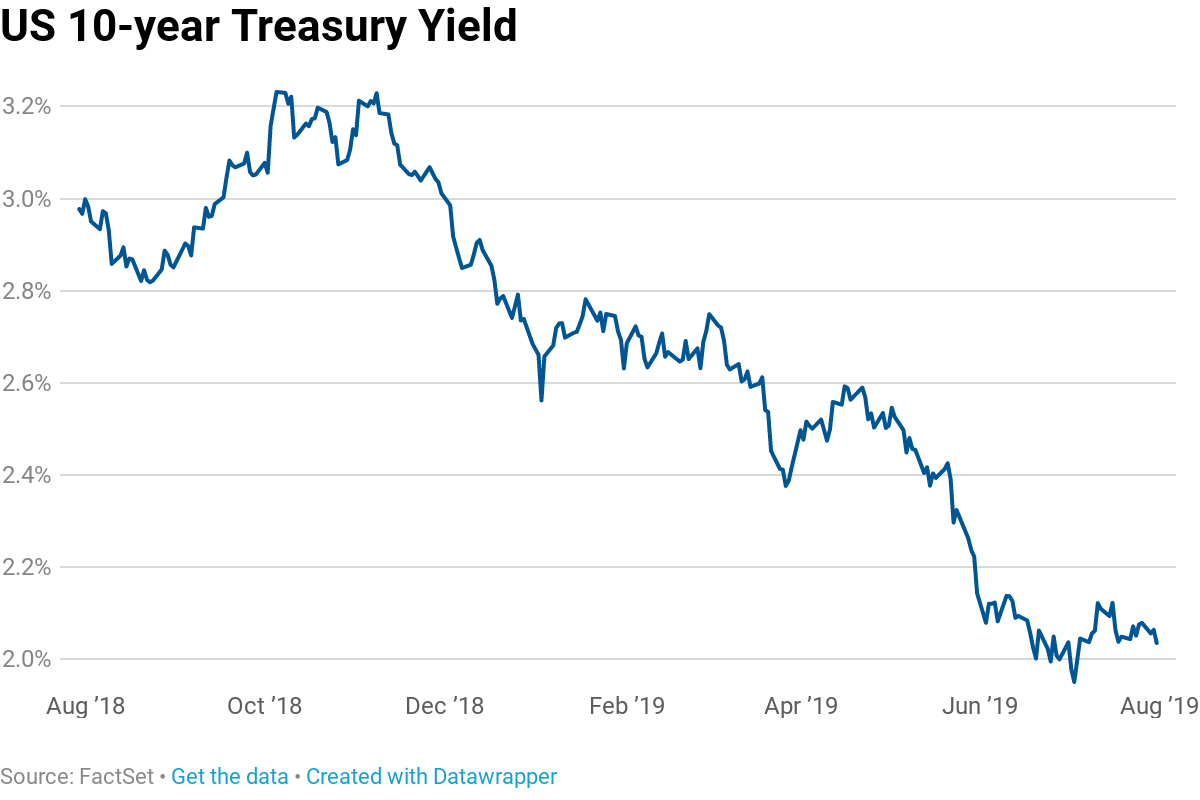 U.S. government debt yields whipsawed on Wednesday after Federal Reserve Chair Jerome Powell said that the central bank’s quarter-point rate cut was simply a mid-cycle “adjustment.”
The Fed decided at its two-day July meeting to cut its benchmark overnight lending rate by one quarter point to a target range of 2% to 2.25%. The central bank also said it would stop reducing the size of its balance sheet, which consists of bonds and mortgage-backed securities it purchased following the 2008 financial crisis.
Wednesday marked the first cut to the federal funds rate since December 2008.
At around 4:04 p.m. ET, the yield on the benchmark 10-year Treasury note, a benchmark for auto loans, mortgages and other lending, settled lower to trade at 2.013%. The 2-year Treasury yield, more sensitive to changes in Fed policy, rose 2 basis points to 1.872%. Bond yields move inversely to prices.
“We’re thinking of it essentially as a mid-cycle adjustment to policy,” Powell said during a press conference after the release.
“When you think about rate-cutting cycles, they go on for a long time and the committee’s not seeing that,” he added. “You would do that if you saw real economic weakness and you thought that the federal funds rate needed to be cut a lot. That’s not what we’re seeing.”
The Federal Open Market Committee cited “implications of global developments for the economic outlook as well as muted inflation pressures” in making its decision. The policymaking committee said economic growth in the U.S. is “moderate” and the labor market “strong,” but still opted to ease borrowing costs.
“There were two components to success: One was to get the dollar weaker and the other was two get the yield curve steeper. They failed on both measures,” said Jim Caron, Managing Director of Global Fixed Income at Morgan Stanley Investment Management.
“I think the result is that they’re going to cut another 25 basis points again in September, so we’re really talking about semantics,” he added. “What we have to really contend with is that a strong dollar makes you miss on inflation all the more.”
The Fed, which seeks to keep inflation around 2%, has had trouble sustaining price growth in recent months despite a healthy economy and low unemployment. That may hint that the current level of interest rates may be too high even though the benchmark is well below historical norms.
Some economists and Fed officials think that rates need to be lowered in the face of decelerating, but still above-average GDP growth in the U.S. and a gloomier outlook overseas as Washington-led trade wars continue.
Still, others highlight historically low levels of unemployment and more modest economic activity as evidence to hold steady.
— CNBC’s Jeff Cox contributed reporting.