Oil pumpjacks in the Permian Basin oil field are getting to work as crude oil prices gain.
Spencer Platt | Getty Images
Oil prices sank on Wednesday after government data showed a large increase in U.S. crude stockpiles for the second week in a row and as the market continues to grapple with concerns about weakening fuel demand.
U.S. commercial crude inventories rose by 2.2 million barrels in the week through June 7, according to the U.S. Energy Information Administration. Analysts in a Reuters poll had expected stockpiles to fall by 481,000 barrels.
Brent crude, the international benchmark for oil prices, was down $1.45 or 2.3%, at $60.84 around 1:25 p.m. ET (1725 GMT). Brent hit a session low at $60.30 in early morning trading.
U.S. West Texas Intermediate crude futures fell $1.44, or 2.7%, to $51.83 per barrel. WTI fell as low as $51.46 earlier in the session.
Crude futures fell to a nearly five-month low last week after EIA figures showed crude stocks surged to the highest level since July 2017. Brent is now down 19% from its 2019 high in April, while WTI is trading 22% lower over the same period. 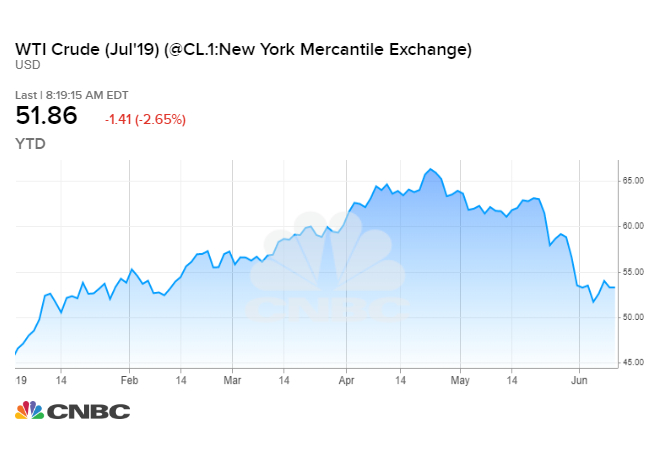 “At a minimum, these results are going to keep traders on the sidelines, or more likely, pressing crude until it stops going down,” Michael Bradley, equity strategist at energy investment bank Tudor, Pickering, Holt & Company, said in a research note.
Oil prices have been supported by expectations that OPEC and its allies will continue to prop up prices by limiting production, but buffeted by concerns that the U.S.-China trade war will weigh on global economic growth and fuel demand.
President Donald Trump on Tuesday said he is holding up negotiations until Beijing agrees to return to the terms of negotiations laid out earlier in trade talks.
“It is constant concern about the demand outlook because of what’s happening with the situation with China,” said John Kilduff, founding partner at energy hedge fund Again Capital.
Stocks and other assets have been bolstered by hopes that the U.S. Federal Reserve will cut interest rates and stimulate growth, but energy commodities need more evidence that economic activity will rebound, Kilduff added.
“Oil is reacting to the disease, while other assets are reacting to the cure more,” he said.
EIA on Tuesday cut its forecast for global oil demand growth to roughly 1.2 million barrels per day in 2019, down from last month’s projection of about 1.4 million bpd. OPEC and the International Energy Agency are scheduled to update their demand outlook on Thursday and Friday, respectively.
OPEC and other major producers are set to meet in the coming weeks to discuss their policy of withholding 1.2 million bpd from the market.
Members of the alliance known as OPEC+ have signaled they are prepared to extend the current deal, which started in January and runs through June, into the second half of the year.
Goldman Sachs on Wednesday said it expects OPEC+ to roll over the policy, given the “historically high” uncertainty in the oil market. The investment bank says it believes the group’s core members, including Saudi Arabia and the United Arab Emirates, will take steps to keep the market from tipping into oversupply or undersupply.
“From an effective production perspective, we expect that core-OPEC will continue to balance the market by responding to consumer demand, and if needed produce below or above its targets, as already exhibited during the ﬁrst ﬁve months of the year. This would lead to a balanced market despite the vagaries of demand and Iran/Venezuela/Libya production,” Goldman said in a research note.
Goldman says that outcome will be only “modestly supportive” of oil prices, keeping Brent near $65.50 per barrel in the third quarter. The oil market will come under renewed pressure in the second half of the year as new infrastructure allows a surge of U.S. production to come online, the bank says.
After surging last year, U.S. crude oil output has steadied around 12 million-12.4 million barrels per day, according to preliminary weekly readings.