Energy I Oil I By CNBC I US crude ticks up 1 cent to $53.27 as OPEC supply cuts counter growth concerns

A gas flare on an oil production platform in the Soroush oil fields is seen alongside an Iranian flag in the Gulf.
Raheb Homavandi | Reuters
Oil prices were little changed on Tuesday, weighed by concerns about a global economic slowdown that could dent crude demand, but supported by expectations that OPEC and its allies will extend their supply curbs.
U.S. West Texas Intermediate settled just a penny higher at $53.27. Brent crude, the global benchmark, settled unchanged from Monday’s settlement at $62.29 a barrel.
Brent is down 17.5% from its 2019 peak reached in April, while WTI is down 20% over the same period. 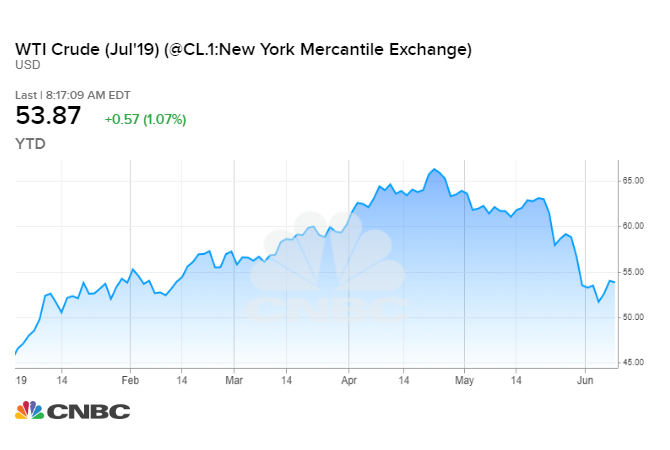 Concern about slowing demand and economic growth has had a large impact on sentiment amid a trade war between the United States and China.
The U.S. Energy Information Administration cut its 2019 world oil demand growth forecast by 160,000 barrels per day to 1.22 million bpd.
“The demand outlook is central to the oil market these days,” said John Kilduff, an analyst at Again Capital. “The global economic data has been chock full of negative surprises, of late, attributable to the fallout from the U.S.-China trade war.”
However, Beijing said it will allow local governments to use proceeds from special bonds as capital for major investment projects, in a bid to support the slowing economy amid an escalating trade war with the United States.
Supporting oil prices on Tuesday was optimism that OPEC and other producers such as Russia would extend an output cut deal that has been in place since the beginning of the year to prop up prices.
The group, known as OPEC+, is due to meet in late June or early July to decide whether to extend the pact.
Russian energy minister Alexander Novak said on Monday there is still a risk that oil producers pump out too much crude and prices fall sharply, suggesting Moscow might support an extension. The comments, along with remarks from Saudi Arabia, bolstered expectations the deal will be renewed.
Russia’s average oil output stood at 11.04 million bpd on June 1-10, up from an average of 10.87 million bpd on June 1-3, two sources familiar with official data said on Tuesday. Oil output in the first three days of June was the lowest since mid-2016, according to Reuters calculations.
Market participants await industry data on U.S. crude stockpiles, due out at 4:30 p.m. EDT (2030 GMT), that is expected to show inventories fell 500,000 barrels last week from nearly two-year highs.
Government data is due to be released Wednesday.