US Market | Wall Street Closing Report on Tuesday 29, May 2019 | Dow slides more than 200 points as yields fall on worries about the economy

Stocks fell on Wednesday as bond yields declined again, triggering concerns about the economic outlook. Increasing trade tensions in the China-U.S. trade fight also weighed on markets.
The Dow Jones Industrial Average dropped 211 points while the S&P 500 slid 0.6%. The Nasdaq Composite declined by 0.7%. The Dow briefly fell more than 400 points as the 10-year Treasury note yield hit its low of the day. 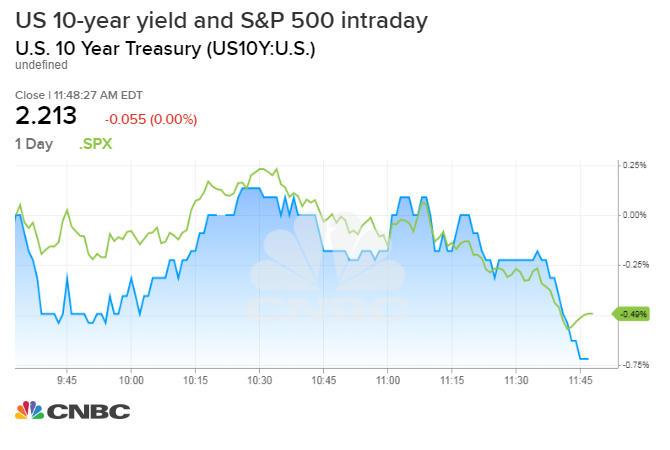 The 10-year Treasury note yield fell to its lowest level since September 2017 and last traded around 2.25%. A portion of the yield curve further inverted as 3-month Treasury bills last yielded 2.36%, well above the 10-year rate. A yield curve inversion is seen by traders as a potential sign that a recession is in the horizon.
Bank shares fell along with yields. Bank of America and J.P. Morgan Chase both slid 0.2%.
The S&P 500 broke below 2,800, a key technical level watched by traders. The broad index also traded around its lowest level since late March.
“The topping pattern is crystal clear,” Frank Cappelleri, executive director at Instinet, wrote in a note. He added that other stock indexes across the globe were also showing topping patterns. “The equity advance through April was broad, which helped keep the uptrend intact. Now, with so many areas sporting bearish patterns like this, if one breaks, the odds are it will have company.”
Washington and Beijing have imposed tariffs on billions of dollars’ worth of one another’s goods since the start of 2018, battering financial markets and souring business and consumer sentiment.
Traders work on the floor of the New York Stock Exchange.
Brendan McDermid | Reuters
Retailers dropped broadly on tariff concerns Wednesday. Abercrombie & Fitch shares plunged more than 26% after the company warned it same-store sales could be flat if tariffs remain unchanged. Dick’s Sporting Goods also fell 5.8%. The SPDR S&P Retail ETF (XRT) dropped more than 2%.
“The market has really gone from a posture of thinking 100% chance of a trade deal, that it was just a matter of when, to now basically thinking there’s probably not going to be a trade deal,” said Larry Benedict, founder of The Opportunistic Trader.
In the latest move, China made a veiled threat this week through state media regarding rare earth minerals, a market crucial to the U.S. technology and defense industries which China dominates.
The major stock indexes were headed for their first monthly decline of 2019. The Dow and S&P 500 were both down more than 4% entering Wednesday’s session.
The Opportunistic Trader’s Benedict pointed out that the market’s decline has been steady and without many large moves.
“This move is worse because everybody is waiting for a bounce and it hasn’t come,” he said. “If we went down 3% and then bounced up 1%, that’s a better scenario than drifting lower … It’s like a slow death.”
—CNBC’s Sam Meredith and John Melloy contributed to this report.