Markets I US Stock Market Closing Report I Dow rises more than 200 points, posts best day in a month to claw back some of Monday's drop

Stocks rallied on Tuesday, regaining some of the sharp losses from the previous session, as investors weighed the impact of the escalating trade war between the United States and China.
The Dow Jones Industrial Average rose 230 points, boosted by gains in Visa and Boeing shares. The S&P 500 advanced 0.9% as tech shares outperformed. The Nasdaq Composite climbed 1.2%.
“The reason we’re seeing this recovery is because fundamentals haven’t changed,” said Kevin Miller, CIO at E-Valuator Funds. He noted the U.S. economy remains strong.
“That being said, we are going through something that we’ve never gone through before,” Miller said. “This China trade agreement issue is changing investing into something more like speculating because no one knows what direction this thing can go.”
Boeing and Apple shares both gained 1.8%  while Caterpillar advanced 2%. Bank shares also rose broadly. Citigroup and Bank of America rose more than 1% each while J.P. Morgan Chase gained nearly 1%.
Microsoft shares rose 1.4% to boost the tech sector. Cisco Systems also gained 1.7% after an analyst at Bank of America touted it as the tech stock to buy amid rising U.S.-China trade fears. Coca-Cola shares rose 1.7% after Morgan Stanley upgraded it to overweight from equal weight. The bank named the soda maker its “top mega-cap staples pick. ”
Greg Luken, CEO of Luken Investment Analytics, thinks this is a “dead-cat bounce,” or a temporary recovery, however. “I think this is going to last for a while,” he said. “This is not something that’s going to be resolved tomorrow and anybody who says they know exactly how this will play out is spinning a yarn.”
“Only history will tell us if this is good or bad,” Luken added.
Major U.S. indexes tumbled Monday after news that China plans to raise tariffs on $60 billion worth of U.S. imports, beginning on June 1. The list of targeted goods ranges from TV cameras to tequila, and includes a range of agricultural products. Beijing’s move comes after Washington announced last week it would increase tariffs from 10% to 25% on a bulk of Chinese imports.
On Monday, the Dow and S&P 500 fell 617 points and 2.4%, respectively, their worst performances since early January. The Nasdaq dropped 3.4%, its biggest one-day loss of 2019. 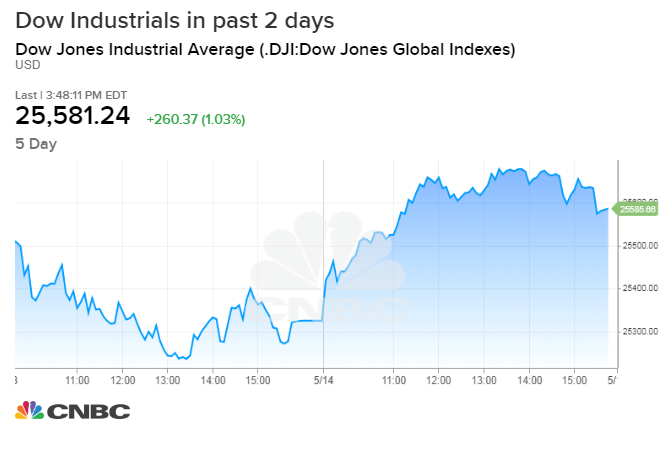 In a note to clients Monday, Citi said its China economists are “cautiously optimistic that a trade deal can eventually be signed.” But it added that the “window to avoid further escalations in US/China tensions is closing fast.”
“Ongoing trade flare-ups may continue to swing the stocks in the near-term, but we think the market may have priced a lot of this in,” Citi said.
President Donald Trump tweeted on Monday that China will be “hurt very badly if you don’t make a trade deal. ” He also said companies would be forced to leave the country without an agreement, adding that China had a “great deal” almost completed but they “backed out.” Stocks came off their lows in afternoon trading Monday after Trump said he had not decided if he would slap tariffs on the remainder of Chinese goods.
Trump also tweeted on Tuesday the U.S. is in a “much better position now than any deal we could have made,” noting that “billions of dollars” are returning to the U.S.
According to the Washington Post, the office of the U.S. Trade Representative has already gone ahead with first steps on slapping tariffs on roughly $300 billion of Chinese imports.
Mike Wilson, Morgan Stanley’s chief U.S. equity strategist, told clients in a note Monday that higher U.S. tariffs on Chinese goods will likely turn into a headwind for corporate earnings — and the economy could fall into a recession if the country’s trade war keeps escalating.