A Petrobras oil platform floats in the Atlantic Ocean near Guanabara Bay in Rio de Janeiro.
Getty Images
Oil prices tumbled nearly 6% on Thursday, extending steep losses in the previous sessions, as the market braced for a prolonged U.S.-China trade war and digested disappointing manufacturing data. Some analysts also pointed to signs that Middle East tensions are moderating.
Brent crude futures sank $3.35, or 4.7%, to $67.64 per barrel around 2:20 p.m. ET (1820 GMT). The international benchmark for oil prices hit a nearly two-month low earlier in the session and is on pace for its worst week since December.
U.S. West Texas Intermediate crude futures settled $3.51 lower at $57.91 per barrel, tumbling 5.7% to the lowest closing price since March 12. WTI is on track to end the week 7.7% lower and post the worst weekly performance in five months.
“The $60 level is a critical support point,” said John Kilduff, founding partner at energy hedge fund Again Capital.
“After $60, really it’s right down around $58 or so. Theoretically, if this thing really becomes a washout, $52 is the downside objective,” he said, cautioning that the move would not happen overnight. 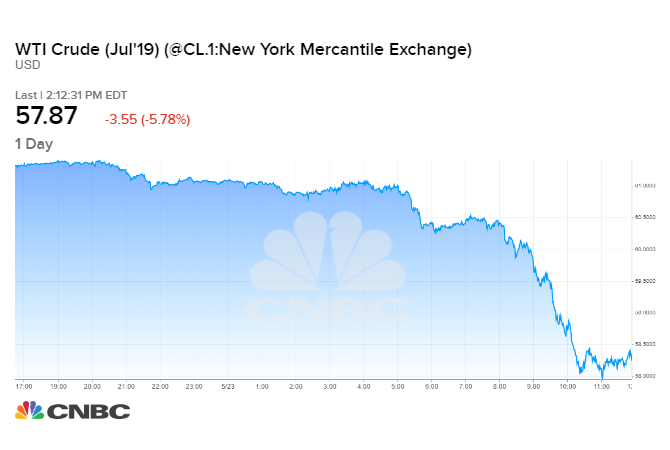 Crude futures fell with the stock market as the ongoing U.S.-China trade dispute entered a new phase. A wave of companies is suspending business with Huawei after the U.S. blacklisted the Chinese telecom giant.
Washington and Beijing are set to increase tariffs on hundreds of billions of dollars of one another’s goods, raising concerns about a global economic slowdown and weaker demand for oil.
U.S. manufacturing activity grew at its slowest pace since September 2009 this month, according to IHS Markit.
Meanwhile, data released overnight showed Japanese manufacturing activity fell into contraction in May. Manufacturing activity for the European Union and Germany also came in below expectations.
Economic forecasting firm Oxford Economics on Thursday warned that weak crude demand appears to be spreading from developed nations to developing economies.
“One particular surprise is that China was weak in March, with diesel demand acting as a significant drag,” Oxford said in a research note. “We are currently forecasting 4% oil demand growth for this year, but this assumes a significant acceleration in the remainder of 2019.”
Oil prices jumped last week on rising tensions in the Middle East after the Trump administration tightened sanctions on Iranian oil exports. However, there are signs the White House is trying to prevent further escalation in the region.
“You’ve got the U.S.-China trade war just doing its damage across the board,” Kilduff said. “Crude was ready to take a hit on it all along except for the geopolitical tensions in the Middle East.”
Politico reported Thursday that Democratic Sen. Dianne Feinstein met with Iranian Foreign Minister Javad Zarif a few weeks ago during a dinner arranged in consultation with the State Department.
The news follows President Donald Trump’s meetings last week with Switzerland’s president, and Secretary of State Mike Pompeo’s phone call with Oman. Both countries have served as intermediaries between the U.S. and Iran, sparking speculation that the White House is trying arrange negotiations.
“The president has made clear that at the right time negotiations are important,” Pompeo told CNBC’s “Squawk Box” on Thursday. “What the president has said is that he’s prepared at the right time, when the Iranians conclude that it’s in their best interest to negotiate, we stand ready to take their call.”
Trump pulled the U.S. out of a nuclear accord with Iran and restored sanctions on the Islamic Republic last year. His administration has issued a list of 12 demands that Iran must meet in order for the U.S. to lift sanctions.
Pompeo said the Trump administration has taken measures to prevent oil prices from spiking while the U.S. attempts to drive Iran’s crude exports to zero.
Still, OPEC members and major oil-producing nations signaled this past weekend that they will likely keep a lid on production throughout 2019, even as Trump calls on them to hike output and cut fuel costs.
Also weighing on oil prices, U.S. crude stockpiles rose by 4.7 million barrels last week, while gasoline inventories jumped by 3.7 million barrels as refinery activity fell.
— CNBC’s Fred Imbert contributed to this report.