A sharp sell-off will start the week on Wall Street after President Donald Trump said on Sunday that the U.S. will hike tariffs on goods imported from China, casting doubt on recent optimism that the world’s two largest economies were close to a resolution to their trade battle.
Dow Jones Industrial Average futures implied an opening decline of about 500 points as of Monday morning stateside. S&P 500 and Nasdaq-100 Index futures also pointed to declines for the two indexes at Monday’s open.
China’s stock markets, meanwhile, suffered significant losses by the end of their morning session.
Trump said in a tweet Sunday afternoon that the current 10% levies on $200 billion worth of Chinese goods will rise to 25% on Friday. He also threatened to impose 25% tariffs on an additional $325 billion of Chinese goods “shortly.”
Though trade negotiations between Washington and Beijing officials are set to resume on Wednesday, the president lamented that the progress is moving “too slowly” as China tries to re-negotiate terms of the deal.
The Wall Street Journal reported that China is considering cancelling its trade talks with the U.S. this week in light of Trump’s latest threats. Citing a source, the Journal said Beijing had been surprised by the new threats.
Two sources briefed on talks confirmed that news to CNBC. The Chinese may back out of negotiations this week after Trump’s escalated tariff threat, they said, abandoning a six-month truce after Beijing waffled on some previously discussed commitments.
One source said Chinese Vice Premier Liu He will likely cancel the trip he’d planned for himself and a 100-person delegation for a final round of talks that U.S. officials had previously said could yield a deal by Friday. Chinese officials cancelled a trip in late September 2018 in similar circumstances.
A second source said Trump’s decision to more than double the tariff rate on $200 billion of goods was meant to send a message to Liu not to come to the U.S. with more “empty offers.”
The White House, U.S. Treasury and U.S. Trade Representative’s office did not immediately respond to CNBC’s requests for comment.
The apparent about-face in trade sentiment left some Wall Street insiders worried about the effect on the U.S. equity market, fresh off record highs.
“Another turn of the screw tighter Sunday from the President’s hard-ball tactics with the China trade talks, and his pair of tweets look like they could unleash a sharp stock market correction,” said Chris Rupkey, chief financial economist at MUFG Union Bank, in a note. “For weeks now markets have been lulled to sleep on the US trade war with China thinking an agreement was imminent. No more.”
“This has all the makings of a complete disaster that could lead the stock market to crater this week and send those external risks to the US economic outlook soaring,” he added.
Shares of U.S. companies with big sales in China may lead the market’s losses on Monday including Apple, Wynn Resorts and various chipmakers on fears China may retaliate. 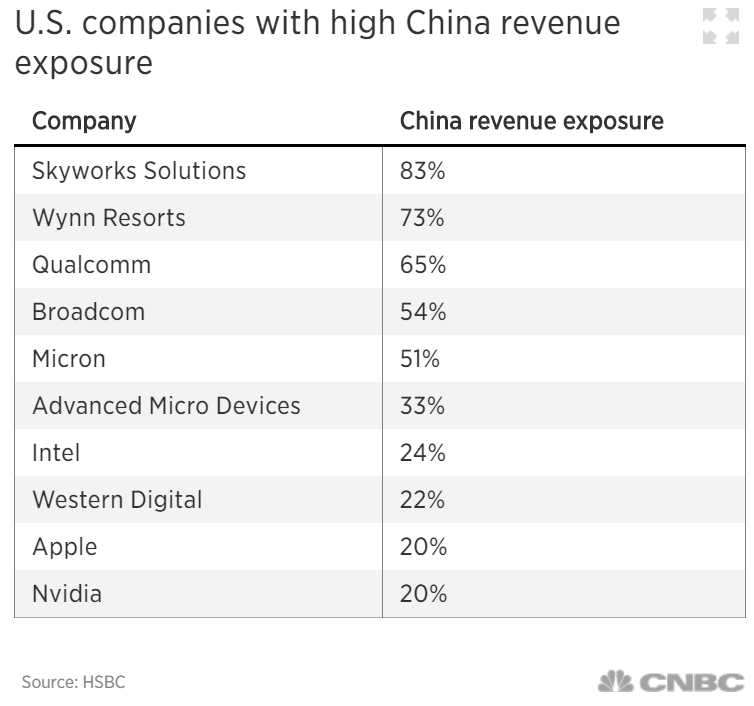 Global trade bellwethers Caterpillar and Boeing could also come under pressure.
The S&P 500, up 17.5% in 2019 alone, notched a record close on Tuesday. The tech-heavy Nasdaq Composite, which has soared more than 20% this year, clinched a record close on Friday.
As the talks near an anticipated end and delve into thorny issues including intellectual property rights, Trump may be hoping to use the strength of the U.S. economy and markets to his advantage. 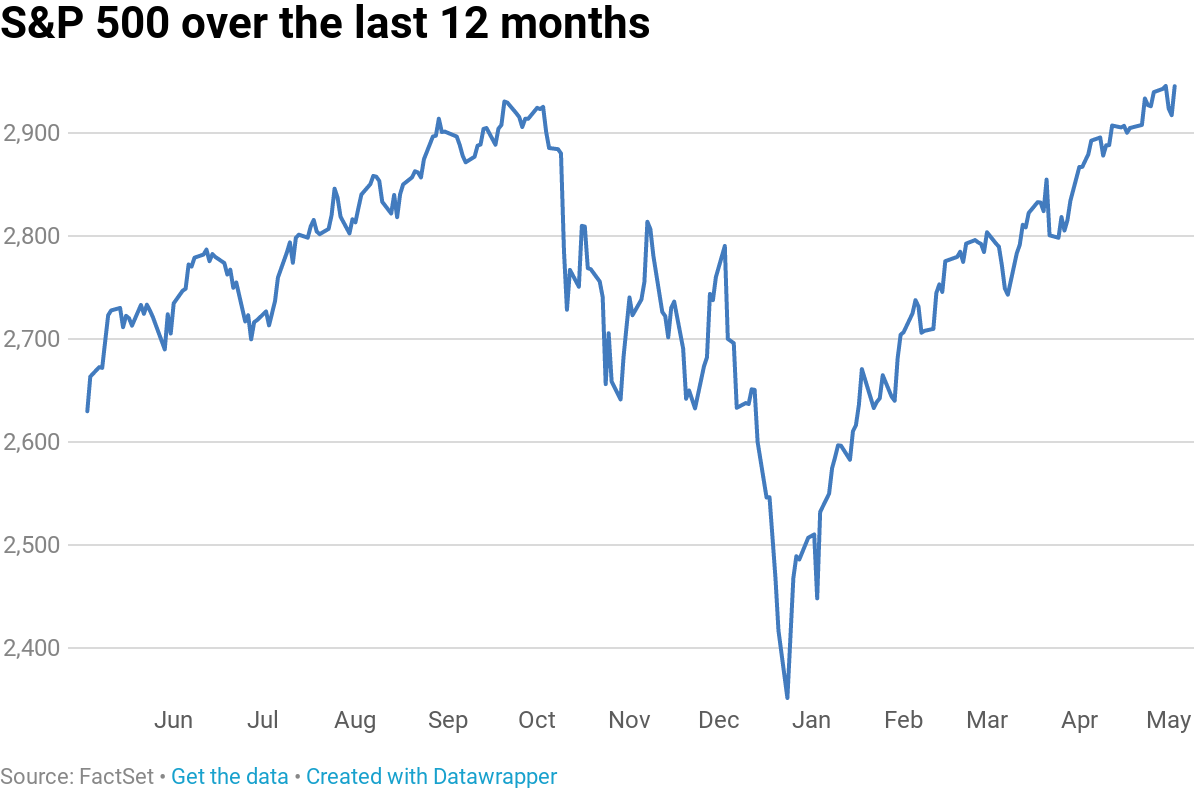 U.S. markets saw sizable gains on Friday after the Labor Department said the American economy added a robust 263,000 jobs in April, with the Nasdaq posting its best day in seven weeks, hitting a fresh record close in the process. The Russell 2000 outperformed and posted its best day since January while the S&P 500 saw its best day in a month.
Despite the fresh enthusiasm, hoping to leverage the relative health of the American stock market and broader economy in the hopes of extracting a better deal in the future could leave some wondering how much longer Wall Street will have to wait for a permanent solution.
Trade officials “kept saying that a deal was imminent, so the market could be disappointed in the near term,” said Bruce McCain, chief investment strategist at Key Private Bank. “I think that some deal was priced in to a degree … the market’s baked in a lot of positives.”
McCain said that while an economic recession still looks unlikely anytime soon, he agreed with Rupkey’s expectations for a sell-off and said he wouldn’t be surprised to see a drop in the range of 5% to 10% if trade negotiations stall.
The president’s announcement also appeared to contradict fresh suggestions from Treasury Secretary Steven Mnuchin and White House chief of staff Mick Mulvaney. Asked Tuesday about Mnuchin’s prior suggestion that the White House could announce an agreement with Beijing in the next two weeks, Mulvaney said, “I think that’s fair.”
The positive outlook from Mnuchin and Mulvaney — as well as upbeat commentary from director of Trump’s National Economic Council, Larry Kudlow — has often met contradiction from trade hardliners like U.S. Trade Representative Robert Lighthizer.
Lighthizer, known for his hawkish economic views toward China, has encouraged Trump not to remove the taxes on Beijing’s goods until it shows it is complying with the terms of the agreement.
“Bob Lighthizer has Trump’s ear, not so much Mnuchin and Kudlow in the final days of the trade talks,” said Larry McDonald, editor of The Bear Traps Report. “The hardball playbook strikes again.”
— CNBC’s Kayla Tausche contributed to this report.