Jean-Paul Pelissier | Reuters
Oil prices steadied on Monday, recovering from an earlier tumble after U.S. President Donald Trump said he would sharply raise tariffs on Chinese goods this week.
The statement risked derailing trade talks between the world’s two biggest economies.
U.S. West Texas Intermediate crude futures were up 66 cents, or 1.1%, at $62.60 per barrel at 1:55 p.m. ET (1555 GMT). WTI hit $60.04 earlier in the session, its lowest since March 29.
Brent crude futures rose 70 cents, or 1%, to $71.55 per barrel. Brent earlier hit its lowest since April 2 at $68.79.
Trump said on Twitter on Sunday that he would hike U.S. tariffs on Chinese goods this week, pulling down global financial markets, including oil futures. 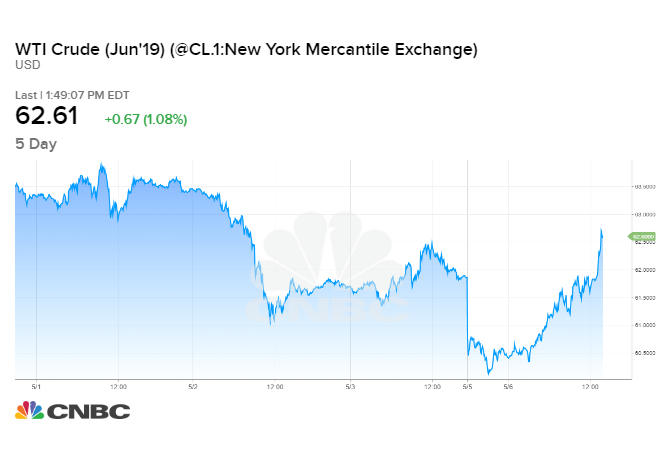 “Trump’s sudden hard line on China tariffs has spooked investors, who are scrambling to reduce their risk levels in the markets,” said Jasper Lawler, head of research at futures brokerage London Capital Group.
“The prospect of months of trade talks being derailed by Trump has raised concerns over future demand for oil,” he added.
Trump’s move triggered reports that China may cancel or cut short trade talks scheduled with Washington this week.
Chinese Foreign Ministry spokesman Geng Shuang told a news briefing on Monday that a Chinese delegation is still preparing to go to the United States for trade talks.
“We are also in the process of understanding the relevant situation,” he said.
News of rising tariffs on $200 billion of Chinese goods at the end of this week has outweighed the announcement that the U.S. is to send a strike group to the Persian Gulf, Vienna-based consultancy JBC Energy said.
In a sign of rising tensions in the region, the United States is deploying a carrier strike group and a bomber task force to the Middle East.
The deployment sends a clear message to Iran that any attack on U.S. interests or its allies will be met with “unrelenting force,” U.S. national security adviser John Bolton said on Sunday.
The move comes after the Trump administration tightened energy sanctions on Iran last week in a bid to drive the Islamic Republic’s oil exports to zero. The U.S. stopped issuing sanctions waivers that allow some of Iran’s biggest customers to import limited amounts of Iranian crude oil.
Within the oil industry, U.S. crude production has surged by more than 2 million barrels per day since early 2018 to a record 12.3 million bpd. The United States is now the world’s biggest oil producer, ahead of Russia and Saudi Arabia.
However, that growth has largely stalled this year due to pipeline bottlenecks in the Permian Basin, the largest U.S. shale field. Oil production fell by nearly 200,000 barrels per day in February, data from the Energy Information Administration showed last week.
American drillers have also been focusing on improving their finances, rather than growing production at any cost.
The number of rigs drilling for oil in the United States rose by two to 807 in the week to May 3, data from oil services firm Baker Hughes showed on Friday. The count is down by 70 rigs since the start of the year.
— CNBC’s Tom DiChristopher contributed to this report.