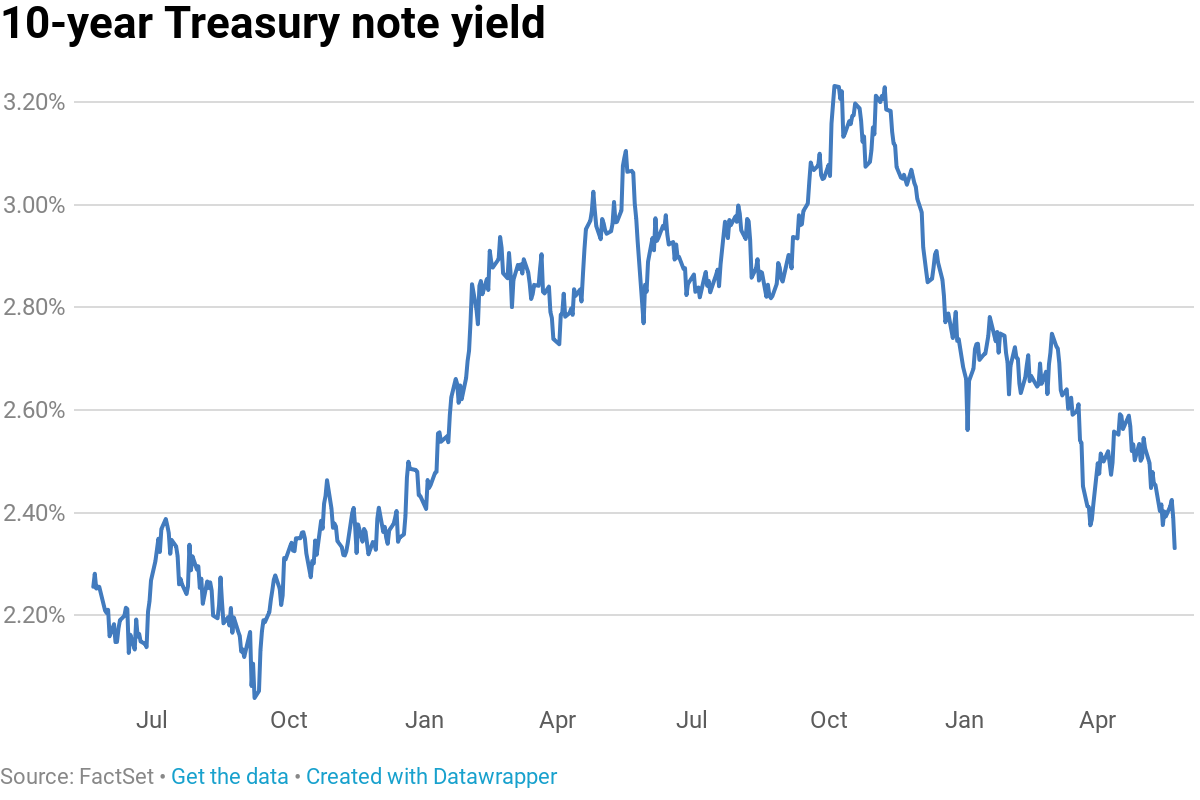 The yield on the 10-year Treasury note fell Thursday to its lowest level since 2017 as Wall Street became more nervous that the U.S.-China trade war could drag on longer than expected.
At around 1 p.m. ET, the yield on the benchmark 10-year Treasury note fell 9 basis points to 2.308%, its lowest level since Nov. 8, 2017. The yield on the 30-year Treasury bond dropped 8 basis points to 2.742%, its lowest level since December 2017.
Both the 2-year Treasury note yield and the 5-year Treasury note yield fell 10 basis points Thursday.
Yields extended their declines after financial data firm IHS Markit said the U.S. manufacturing Purchasing Managers Index fell to 50.6 in May, the lowest reading since September 2009.
“Growth of business activity slowed sharply in May as trade war worries and increased uncertainty dealt a further blow to order book growth and business confidence,” said Chris Williamson, Markit’s chief business economist.
The latest slump in long-term rates comes just months after the yield on the 10-year note climbed above 3.2% for the first time since 2011. The about-face in yields reflected a widespread downshift in U.S. GDP expectations as hostile trade rhetoric eclipsed the waning impact of the Trump administration’s tax cuts.
For its part, the Federal Reserve paused its cycle of rate hikes in March, citing a downgraded economic forecasts and anemic inflation prints. That has kept short-term yields anchored near the Fed’s overnight lending rate. Investors tracked by the CME Group’s FedWatch tool believe the central bank is more likely than not to cut rates at least once by December 2019.

The latest fight between Washington and Beijing worsened after U.K.-based semiconductor designer Arm Holdings said it suspended business with Huawei to comply with the U.S. blacklisting of the telecom company. Panasonic, Vodafone and BT Group have also adjusted their businesses to comply with U.S. stipulations.
The Trump administration’s recent criticism of Huawei came in tandem to increased tariffs between the two economic powerhouses and a breakdown in negotiations earlier in the month. The U.S. hiked the tariff rate on $200 billion of Chinese goods to 25% from 10% on May 10 and threatened to slap even more onerous duties on another $300 billion imports.
China is taking a stronger tone in its rhetoric towards the U.S. Ministry of Commerce spokesperson Gao Feng said: “If the U.S. would like to keep on negotiating it should, with sincerity, adjust its wrong actions. Only then can talks continue.”
The heated rhetoric between the two governments has kept equities under pressure and fostered demand for safer assets like government debt, said Kevin Giddis, head of fixed income capital markets at Raymond James.
Xinhua News Agency | Xinhua News Agency | Getty Images
“The Treasury market is trading higher this morning as the apparent differences between the U.S. and China is quickly morphing from a trade issue to an all-out trade war,” he wrote in a note Thursday.
“The tariffs are increasing, and the rhetoric has reached a feverish pace. This back-and-forth is beginning to convince economists that we could not only engage in a trade war with China, but it could last for longer than most expect,” Giddis added.
On Wednesday, minutes from the Federal Reserve’s latest meeting showed that officials agreed their current patient approach to setting monetary policy could remain in place “for some time. ” It marked another sign for investors that policymakers at the U.S. central bank see little need to change rates in either direction.
Initial claims for state unemployment benefits fell 1,000 to a seasonally adjusted 211,000 for the week ended May 18, according to a Labor Department report published Thursday.
— CNBC’s Sam Meredith contributed reporting.