Bonds | Bond Yields Report on Tuesday 30, May 2019 | Treasury yields fall into the red as May decline continues 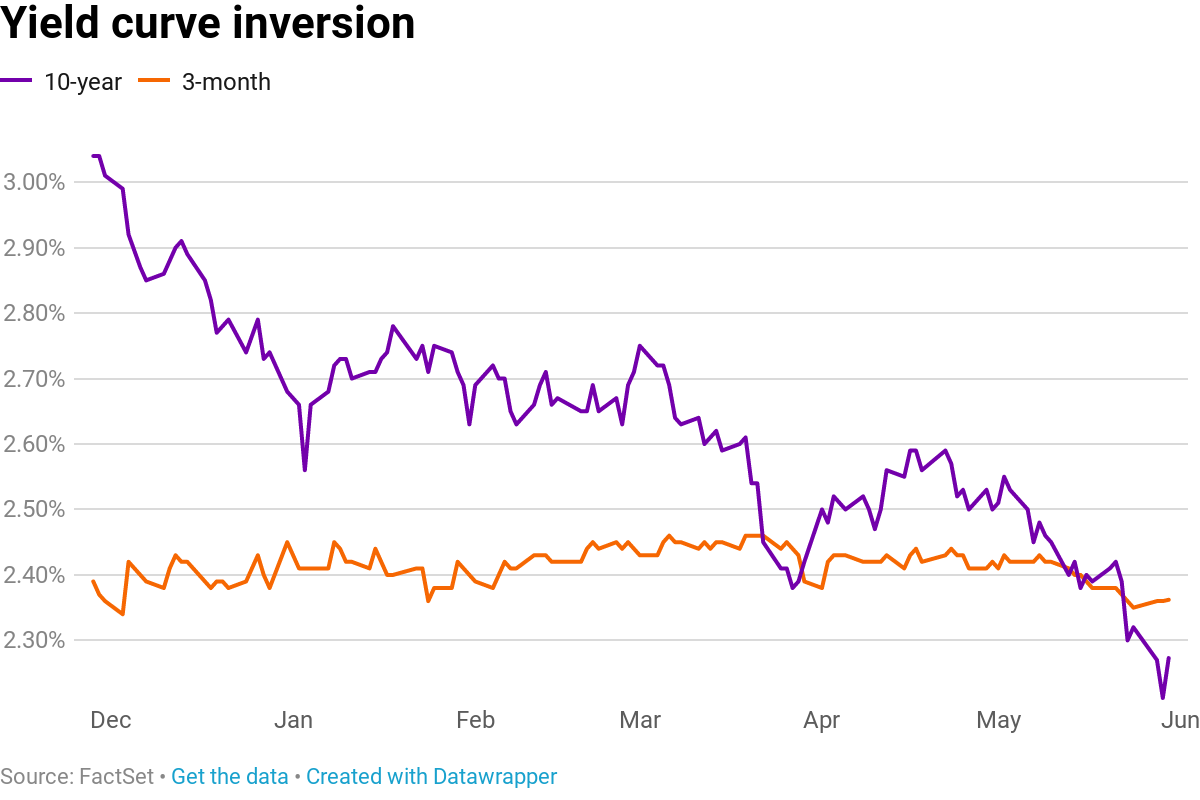 Long-term U.S. government debt yields reversed an early climb Thursday and fell into the red in afternoon trading as investor angst over the state of the global economy rekindled demand for safer assets.
At around 2:47 p.m. ET, the yield on the benchmark 10-year Treasury note, which moves inversely to price, was lower at around 2.225%, off a 20-month low of 2.21% hit on Wednesday. A portion of the yield curve remained inverted as the yield on the 3-month Treasury bill held rose to 2.372%. The 2-year rate slipped to 2.067%.
Under normal market conditions, those that buy debt from the U.S. government for years are compensated with better interest rates than those who loan money for a matter of months. That usual upward yield curve can sometimes “invert” downward if traders think future output growth is likely to fall.
The most recent angst about the economic outlook, for example, has sparked purchases of long-term Treasury debt, keeping rates on securities with longer maturities below those with shorter expirations. The spread between the 10-year yield and the 2-year yield, the part of the yield curve that some believe is most important, remained at a positive, albeit flattish 15 basis points.

There’s a strong focus on the bond market after long-term government debt yields fell further below rates on short-term notes and bills during Wednesday’s session. The phenomenon, described as yield inversion, is often interpreted as a recession indicator. Investors are wondering whether the bond market is sending warnings about economic growth in the U.S. and globally.
The second print on first-quarter U.S. GDP indicated that the economy expanded by 3.1% on an annualized basis over the three months. That 3.1% print topped a Dow Jones estimate of 3%.
Meanwhile, home shoppers signed 1.5% fewer contracts to buy existing homes in April versus March, according to the National Association of Realtors’ Pending Home Sales Index. Sales were 2% lower compared with April 2018, the 16th straight month of annual declines.
Elsewhere, Fed Vice Chair Richard Clarida will speak at the Economic Club of New York at 12 p.m. ET.
— CNBC’s Silvia Amaro contributed reporting.